A forest that heals

A forest that heals

The local shaman’s house, located on the edge of the forest in Tangia Basti, is a space where differences are temporarily suspended 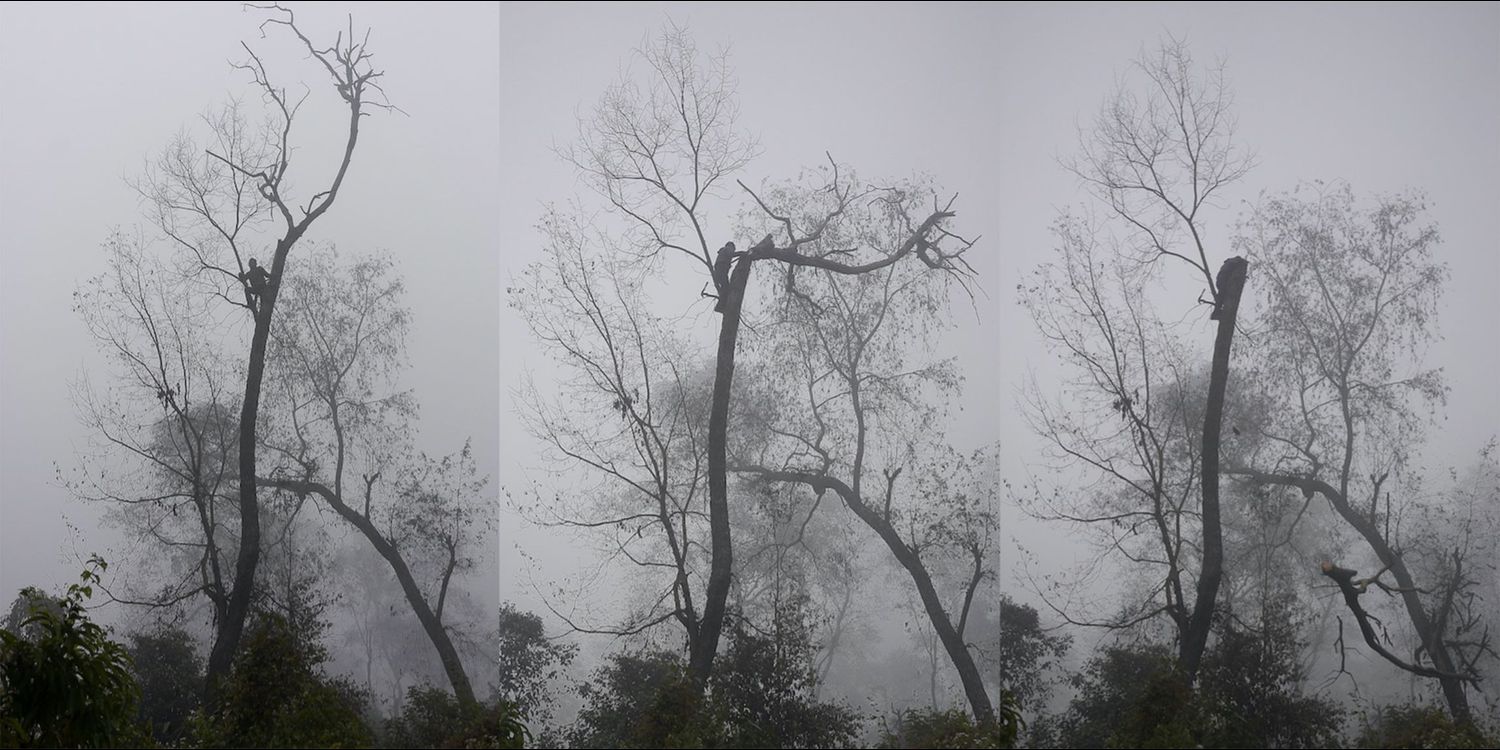 It’s an early January morning and Tangia Basti is surrounded by a thick winter fog. A small figure stands atop a tall tree anywhere between ten to 15 meters high. The man waves at me, then goes back to chopping dead branches from the tree; he is fetching wood for his household, a daily routine for many men in the forest.

On the southern end, the village’s boundary is demarcated by a small river. On the other side lies the forest. Surrounded by a light fog, I follow a shepherd early one morning. He crosses the shallow waters before slowly disappearing inside the thick forest, his buffaloes before him. As I keep walking along the river, I spot another man bathing, and quickly realize that the fog is actually vapor emanating from the river. I discover that during wintertime, the river turns unexpectedly warm in the early hours, creating an ideal condition for people to bathe. A large fallen trunk by the side of the river functions as a platform where people wash clothes and hang them to dry.

Despite nature’s helping hand, life is not easy in Tangia Basti. Winters are cold, facilities minimal, and everyone works hard to make ends meet. Opportunities beyond farming are scarce, and many have left the Basti to look for work elsewhere. Those who have stayed struggle with the challenges that come with trying to sustain livelihoods in a village.

A week into my stay in the village, I am introduced to the enigmatic ‘ban jhankri’ (forest shaman), known for using the animalistic forest energy to heal those possessed by ghosts and spirits. The shaman lives on the edge of the village. In front of his house, there’s a path leading to an ancient banyan tree adorned by religious threads and ornaments. When I get in touch with the Shamanistic Studies and Research Center in Kathmandu, I learn that special trees are believed to have the power to absorb the dark spirits of the forest. This banyan tree is one of them. As part of the healing process, the shaman enters a state of trance, extracts the negative energies affecting the possessed, and transfers them to the shamanic tree.

Cultural beliefs and rituals can help bring communities together. They are also ways in which different ethnic groups can segregate. In Tangia Basti—made up of different castes, ethnicities and religious groups including Tamangs and Magars, but also Dalits, Chettris and Brahmins—the house of the local shaman is a space where differences are temporarily suspended, and all are allowed to enter.

It’s 6 pm on a Sunday, and the sun is about to set. A group of people are waiting outside the shaman’s house. They’re all looking for some form of counsel; a woman has developed insomnia; an old man has a food allergy; a young girl who's suddenly turned quiet at school and which has worried both her teacher and parents. A friend tells me that this girl has come in contact with a spirit of the forest which has now possessed her.

In my time spent in Tangia Basti, I try to find out more about the shaman and his relationship to the people. He is well regarded by the community and his ‘services’ are in high demand. On Sundays, when people aren’t working, larger group ceremonies take place at his house or by the banyan tree. It is not just the shaman, but all the people who have gathered that try to communicate with the spirits—the mood is vibrant. There is tension, a bit of drama, along with a few laughs here and there. Apart from spiritual counsel and healing, these shamanic rituals appear to offer the people of the Basti a moment of escape from the many socio-economic problems that plague their lives.

The community here has lived more or less in isolation, away from the benefits of national and international development agendas. Now, they face the threat of being homeless and displaced. The controversial plan for an international airport in Nijgadh which—if carried out—could raze the very forest that is so integral to the lives of the people of this Basti. Late last year, the Supreme Court had issued an order to stop construction of the airport. But more recently, there has been news that work on the airport will resume, even as the entire country is struggling to cope with the coronavirus pandemic. A nationwide lockdown has stretched over two months. People who already had little have been the ones to suffer the most. If the airport construction resumes, the future of the Tangia Basti community will become ever more uncertain.

It’s a hot afternoon in the beginning of March. A young man, by now a friend, bathes against the strong spring sun which has now replaced the winter fog. When I ask him about the three things he loves about Tangia Basti, his answer is simple: freedom, nature’s beauty, and the fine community we have here.

A local hunter knows his way miles deep into the forest.

For the inhabitants of Tangia Basti, income is predominantly generated by farming.

The shaman’s hand. Rice is used to ward off negative energies.

The forest at night.

There are three schools in the community of Tangia Basti.

Fruits and flowers being offered to the shamanic tree as part of a ritual.

The small clay statues are a symbol of ‘Shikari,’ the hunter spirit of the forest.

The village by night.

The shaman performs a ceremony by the shamanic tree. Here, he is helping a

young girl while she recovers from a trance.

A young man bathes in the river during a hot afternoon in March.

This photo essay is part of a larger multimedia project ‘To Search the Secret of the Forest’ which can be experienced online.

Pietro Lo Casto  Pietro Lo Casto is an Italian Visual Artist currently based in Bangkok. His practice explores social and environmental issues, with a particular focus on the relationship between humans and nature.

Nepalis by and large tend to prefer dogs as pets but cats, once maligned as bad omens, are slowly winning hearts.

Beneath our rock bottoms

Reflections on one’s lowest to see what lessons can be learnt by the self and society.

The reduction of quotas in civil service represents yet another backlash against inclusion.

Why being an ally is important

A glimpse into what my life has been like under lockdown