A health revolution in name only

A health revolution in name only

While the government touts its mega health-infrastructure plan, its mismanagement of the Covid crisis shows it will probably not be able to deliver on the plan’s promises 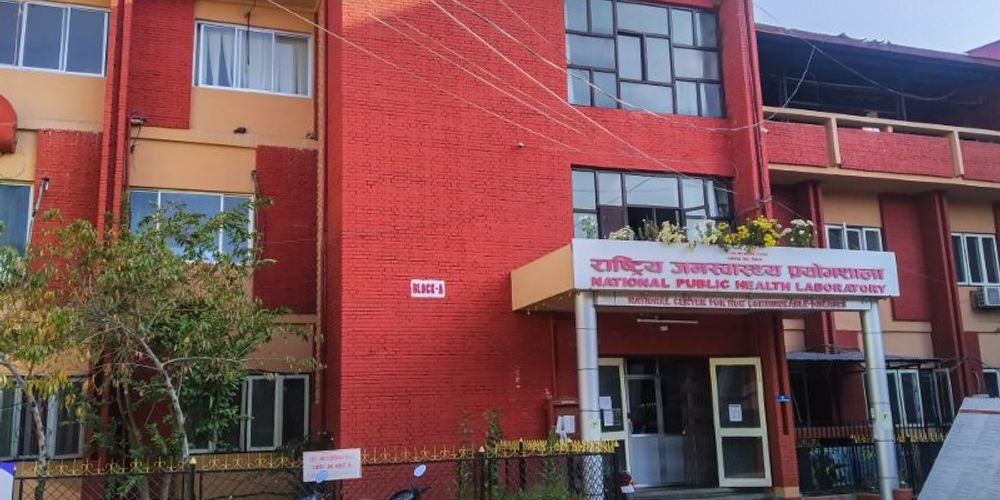 If government publicity is to be believed, on Nov 30, it laid the foundations of 396 local-level hospitals, whose construction will be completed in a couple of years. Government ministers were quick to call it a “revolutionary move”, as they were laying the foundation stones in the usual Nepali style (with the attendant performance of a ritual accompanied by recitations by Hindu priests). According to the plan, the hospital buildings are to be completed in two years. But the proposed plan does not say anything about how the rest of the requirements will be met: there are no details on how the needed human resources, equipment, and medicine supplies will be accounted for. More importantly, it’s not clear how the government will find resources for building the hospitals, and among the public, there is already talk about whether the project will even see the light of day.

As often happens in Nepal, some members of the public celebrated the news. When similar plans have been floated in the past, large sections of the public have either welcomed them without delving into the plans’ details, or as sometimes happens, were forced to accept the government’s purported ‘plan’ because the details of the plan were withheld from the public. For this recently rolled out project too, the part to do with resources for building the hospitals was not revealed during the announcement function, which was orchestrated nationwide to make it look like a well-coordinated beginning to a large government project.

Hridayesh Tripathi, Federal Affairs and General Administration Minister, said such a project was rare in South Asia. “I did some research. But no country is building health infrastructure on such a massive scale,” said Tripathi. “It's the first of its kind in South Asia.”

He did tamp down the rhetoric somewhat by admitting that some local governments were unable to lay their hospital foundations owing to the locals’ conflicting views about the areas proposed as construction sites.

Besides the cadre members of the ruling party, some members of the public are also hailing the project as a remarkable undertaking by this government. But many doubt that the project will actually be completed. Given the country’s track record with big projects, there are plenty of reasons to be skeptical that the plan’s goals will be achieved. Another project of a similar scale--the Melamchi drinking water supply project--which was supposed to bring water to Kathmandu from Melamchi, Sindhupalchok District, is nowhere near completion, even three decades since its inception. The mega hospital project--which is supposed to see the construction of 396 hospitals--makes for a similarly huge task for Nepali constructors.

Many regard the announcement about hospitals as just a diversionary tactic because it was made at a time when the ruling party has been embroiled in political infighting.

There is yet another reason for the skepticism: largely because of the government’s ineptitude, the country is reeling under a Covid crisis. For its part, the government has been blaming their lacklustre performance on the lack of funds to conduct tests and treat Covid patients. It has thus scaled down testing and asked the public to cover medical costs themselves. And the health ministry has asked the public not to go to hospital unless they are facing an emergency. The country does not have enough quarantine centres, isolation centres, hospital beds, ICUs, and ventilators.

Prime Minister KP Sharma Oli and his administration have never taken the virus seriously--right from the onset of the pandemic. For example, Nepal imposed a lockdown only after India did. But because the lockdown here was ill-designed, infections continued to spike through the nationwide closure. And when the lockdown was eased in June, the country began to see a dramatic rise in caseloads.

On Friday, the country’s Covid infection numbers reached 238,861, while the death toll reached 1,567. But the government says there has been a significant decline in the number of active cases, which currently stands at 15,447. It claims the decline in active cases is a result of 92 percent of the infected recovering. But public health experts argue that the government data is deceptive. The number of deaths is still high, contact tracing has virtually stopped, and daily PCR testing numbers remain below 10,000. The experts say that because the number of tests are so low, the situation can appear to be improving. Furthermore, they have warned that any complacence now could lead to a second wave in the coming autumn.

But despite the health crisis, the government decided to opt for their hospital mega project. On cue, Oli’s supporters began portraying him as a great visionary leader of his time, arguing that no one had taken such a pro-people decision ever in Nepal’s history.

But as is the case with most projects in Nepal, this one too has already hit a snag. The foundations of only a few hospitals were laid on Nov 30. The Kotjahari Primary Health Post, for example, was one among the 396 hospitals included in the government plan. Because the town already had a primary health post, the government decided to upgrade the post to a 15-bed hospital, to cater to the population of Chaurjahari Municipality. There thus ensued a row over where the hospital should be built. Because that issue was not settled by the local government, the foundation of the hospital could not be laid. The issue still has not been resolved, even with the Mayor of Chaurjahari, Bishal Sharma, seeking help in Kathmandu, and with the municipality’s engineers trying their best to solve the problem too.

A day after the scheduled foundation-laying programme was to be conducted, a team of local leaders also visited the health post. Their efforts also couldn’t bear fruit either, as the ward chairman didn’t budge from his stance to not let the municipality build a hospital anywhere else but at the existing health post. A similar drama played out in Saipal Rural Municipality, Bajhang. The local government there couldn’t lay the foundation of their hospital owing to a dispute over the construction site.

Thus, although the government has claimed that 396 hospitals are being built, many local governments were actually unable to lay the foundation of hospitals in their locality.

Furthermore, although the government wants to take the credit for coming up with the plan, the decision to upgrade existing hospitals and build new ones where there are necessary was taken by the previous government. According to Dr Lochan Karki, president of the Nepal Medical Association, the government had decided to establish 5- to 15-bed hospitals in each local government on May 4 2018, when Gagan Thapa was the health minister.

Unfortunately, that government could not execute the plan for lack of resources and time. This government has finally started implementing the plan, but just building the infrastructure alone does not guarantee that service will be delivered.

Many other problems first need to be accounted for. For one, Nepal’s existing hospitals do not have enough healthcare workers. Many need doctors, nurses, paramedics, and other personnel. Many don’t have the needed equipment nor the medicine supply. “When the plan was being discussed, we had suggested that the services should be the priority, not hospital beds,” said Dr Karki. “We need to provide basic health, primary, and expert services. In many hospitals, we have beds but no services.”

Nepal--a country with a population of 30 million, and already facing a shortage of medical professionals--is currently even more overwhelmed because many health workers are infected with the coronavirus.

According to government statistics, Nepal has about 26,000 doctors and 50,000 nurses. As much as 30 percent of the country’s registered doctors are said to have migrated abroad owing to Nepal’s low pay scale and lack of social security schemes and because they wanted a better future, among others.

Among those staying back in Nepal, more than 500 doctors have already been infected with the coronavirus, whereas the number of nurses infected in the course of providing corona treatment stands at 800.

And while the government touts its plans to expand health facilities, most local governments are in a fix about how to arrange for resources and complete the construction of hospitals in accordance with the government plans.

“This multi-year project will be completed in coordination with the local government. We have already sent the first installment of the fund,” said Tripathi.

Health experts, however, continue to underscore the need for developing a plan for arranging manpower simultaneously when building hospitals.

“Today, if you look at the number of healthcare workers, you’ll find it has remained constant for many years. They should have announced plans to hire health workers too,” said Dr Karki arguing that, right now, fighting Covid should be the priority,  “How can we respond to Covid by building hospitals now? The government could have expanded the services of the existing hospitals, instead.”

Even among those who are praising the government move, some say the government should have focused on other interventions to contain the coronavirus before announcing the mega plan. For instance, in Bir Hospital, health workers who have been providing service at the risk of their lives, have, for months, been staging protests to demand they be paid their salary. In response to these and other Covid-related issues, the government has been saying it has no funds and that it is being forced to adopt austerity measures and scale down tests and treatment.

“Building hospitals is crucial, but there is the Covid crisis to deal with,” said Pratap Poudel, one of the advisors to former health minister Gagan Thapa. “The government should prioritize its plans based on the need and urgency. Besides, infrastructure in itself is not enough to deliver service. An integrated approach is required to improve health service. The focus of this government is on infrastructure development, but the plan does not include other crucial components, such as health workers, equipment, medicine, and management.”

Poudel speaks from experience: he worked with NC leader Gagan Thapa on a blueprint to reform the health sector. Thapa’s vision was to reduce the price of medicines and health-service delivery throughout the country. Toward that end, Thapa had formed a team of doctors and researchers entrusted with the responsibility of studying and proposing reforms to the health sector.

The team had made an assessment of the overall health institutions, human resources, and financial requirements--which Poudel calls an integrated approach to health-sector reform. However, Minister Thapa had to leave office before the plan could be implemented. What the Oli government has done now is to start implementing Thapa’s reform plan. The original plan, if implemented properly, will in the long run, help make healthcare more affordable and accessible to more people--but that will only happen if the government works on the other components of the plan, say experts. Just proposing to build hospitals, they say, is only a populist move by a government that has failed to provide health services during the current Covid crisis.

With winter approaching, a surge in Covid-19 cases likely

Kathmandu air pollution will have long-term impacts not just on public health but also on individual cognition and the national economy.

Daily summary of all Covid19 related developments that matter

The ruling party’s top leaders have finally come to a truce, but the peace probably won’t last