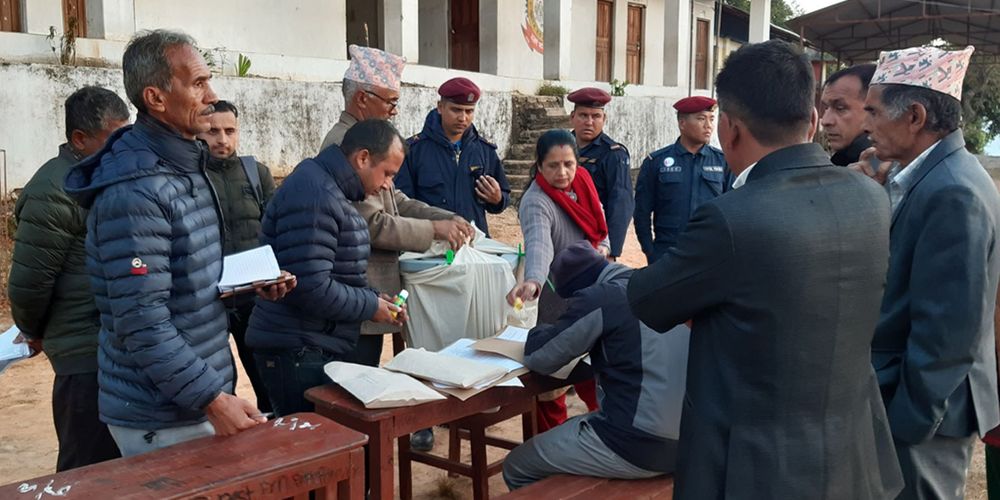 The ruling Nepal Communist Party (NCP) has blamed intraparty rifts and local government’s “tax terror” for its losses even in traditional strongholds in the November 30 by-elections to 50 local, provnicial, and federal government seats in 37 districts. An NCP secretariat meeting held on December 4 concluded that arbitrary taxation by local bodies was hurting the party’s image at the grassroots. The NCP had claimed repeatedly in the run-up to the election that it enjoyed broad and unshakable public support.

The party, which was formed through a merger between the Communist Party of Nepal-Unified Marxist Leninist (UML), and the Communist Party of Nepal (Maoist Centre), suffered resounding defeats in long-time communist bastions such as Dharan, Bhaktapur, and a ward in Bharatpur municipality, among other places. The NCP did, however, retain a provincial assembly seat in Dang and the only vacant seat for the federal parliament in Kaski. The meeting directed the party’s lower chapters to prepare detailed reports on the by-elections.

One major take away from the by-polls was that voters in both the hills and plains, while unhappy with the major parties, are reluctant to throw their lot behind reluctant self-claimed alternative forces like Bibeksheel Party, and Janamat Party.

The main opposition Nepali Congress has also called a meeting to reflect on poll results.

In a major setback for the government, the Supreme Court on December 6 ordered government authorities to halt the process for construction of the planned Nijgadh International Airport. A single bench of justice Tanka Bahadur Moktan delivered the order in response to a writ petition filed by nine environmentalists and wildlife activists challenging the government’s proposal, which includes the felling of 2.4 million trees to build the controversial airport. The activists are demanding that the site of the airport be moved, to preserve the dense forest and its biodiversity.

Both the petitioners and defendants, including the Prime Minister's Office, have been summoned to court for a discussion on December 15.

The Nepal Bar Association (NBA) has taken exception to the Judicial Council (JC)'s plans to nominate one of its members as a justice of the Supreme Court. During a meeting with Law Minister Upendra Yadav on December 6, an NBA delegation warned that the bar would not accept such a nomination, as it breached existing laws and the judicial code of conduct.

On December 5, a meeting of the JC ended without naming a nominee for a vacant position of  justice at the apex court. At least two of five members of the JC, which includes Minister Yadav, opposed Chief Justice Cholendra Shumsher Rana's proposal to nominate Padam Prasad Baidik. Baidik had resigned as a member of the JC just hours before the meeting, after being promised that he would be nominated as a supreme court justice.

Citing official documents, the newspaper reported that Bhim Bahadur Sambahamphe, a land revenue officer who authorized the transfer of park land to private hands, was killed in a Maoist attack in Salleri on November 25, 2001, the day the land was transferred to the names of Lakpa Tenji Sherpa and Aang Maya Sherpa. The The two individuals say they were unaware that any and had been transferred to them. They are not related to Yeti World, which includes Yeti Airlines, Thamserku Trekking, and other hospitality and tourism related businesses.

The land in question, one of the best viewpoints facing Mount Everest and other peaks now houses the Yeti Mountain Home-Kongde, one of the most expensive luxury trekking hotels in the country.

Ang Tsering Sherpa, a co-owner of Yeti World, was killed in a chopper crash along with six others, including Tourism Minister Rabindra Adhikari in February 2019.

If true, this adds to the growing number of scandals associated with misappropriation of public land, including the Lalita Niwas issue.

Prime Minister KP Oli was discharged on December 5 from Manmohan Cardiothoracic Vascular and Transplant Center (MCVTC) where he was recovering from emergency surgery on November 26 to treat peritonitis, an infection in the abdomen. Uttam Krishna Shrestha, MCVTC executive director, said in a statement  that the hospital had decided to release the prime minister with the recommendation that he needed a few more days of bed rest after his health had gradually improved.

Oli, who has been on hemodialysis since October, is planning to have a second kidney transplantation, and is reportedly looking for possible donors within his family circle.

Representatives of guthis concerned about proposed changes to guthi-related laws and likely commercialization of guthi-controlled land have threatened to take to the streets again if their concerns are not unaddressed by the proposed Integrated Land Act. During a meeting with Minister for Land Management, Cooperative and Poverty Alleviation Padma Kumari Aryal on December 5, representatives of various private guthis said they would only support the regulations provided they did not alter the  rules that have long governed the functioning of guthis and land privately owned by guthis. Many people, particularly in Kathmandu, occupy guthi-controlled land and pays land-use revenue to the Guthi Corporation.

Nearly six months after being forced to withdraw the Guthi Act, the government is again attempting to introduce a new act that would, among other things, regulate the use and ownership of land under the Guthi Corporation.

The government claims that the new regulations would bring an end to the misuse of public properties and help pave the way for what it calls scientific management of guthi-owned land. Critics are concerned that this could erode the authority of guthis.

Minister Aryal told the visiting delegation that the government would not introduce any clause that could affect private guthis or individuals who own or use guthi-controlled land.

Political parties and student groups continue to protest against what they call encroachment of Nepali territory and the government’s weak response. Speaking at a December 3 program at Niti Aayog, a government think tank, border experts and civil society members urged the government to publish its own new map to counter the Indan map and to start negotiations to reclaim the disputed land. Some are calling on the government to internationalize the issue, but NCP Co-Chair Pushpa Kamal Dahal on December 5 rejected the idea, saying that the only option was to find an amicable solution through bilateral talks.

Tourism Minister Yogesh Bhattarai on December 4 appealed to ambassadors of 31 countries to support the government of Nepal in promotion and management of the upcoming Visit Nepal Year (VNY) 2020. VNY 2020, the first such campaign since 1998, seeks to double tourist arrivals, to two million a year. The Oli government had earlier appealed to Nepalis residing abroad to send at least one foreigner to visit Nepal.

The government is proposing sweeping legislative changes that curtail constitutional rights and consolidate power. Here's a refresher on what is at stake.

How India saved the Oli government

The ongoing border dispute, inflamed by India, has given back the reins of the country to an otherwise faltering premier

The OMNI scandal and its impacts

Covid19 Roundup, 4 May: Nepalgunj on high alert but no decision on strategy after 7 May

The geo-politics of a river.