Long lines, crowds, and confusion have characterized the vaccination drive in Biratnagar. 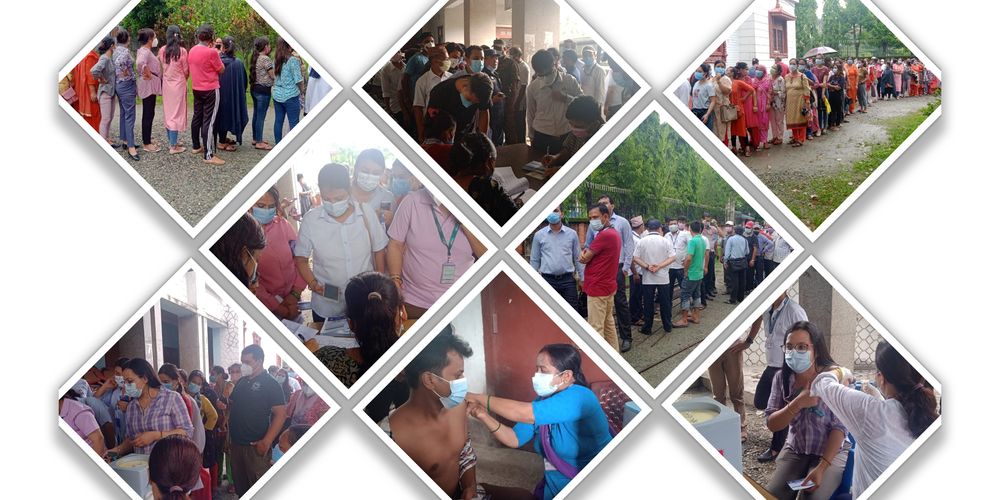 Monday was the first day of the vaccination drive in Biratnagar and the scene was a replication of what has long characterized the vaccination campaign in Nepal — long queues, little social distancing, and a lack of masks. There was no token system and vaccines were given out on a first-come-first-serve basis. 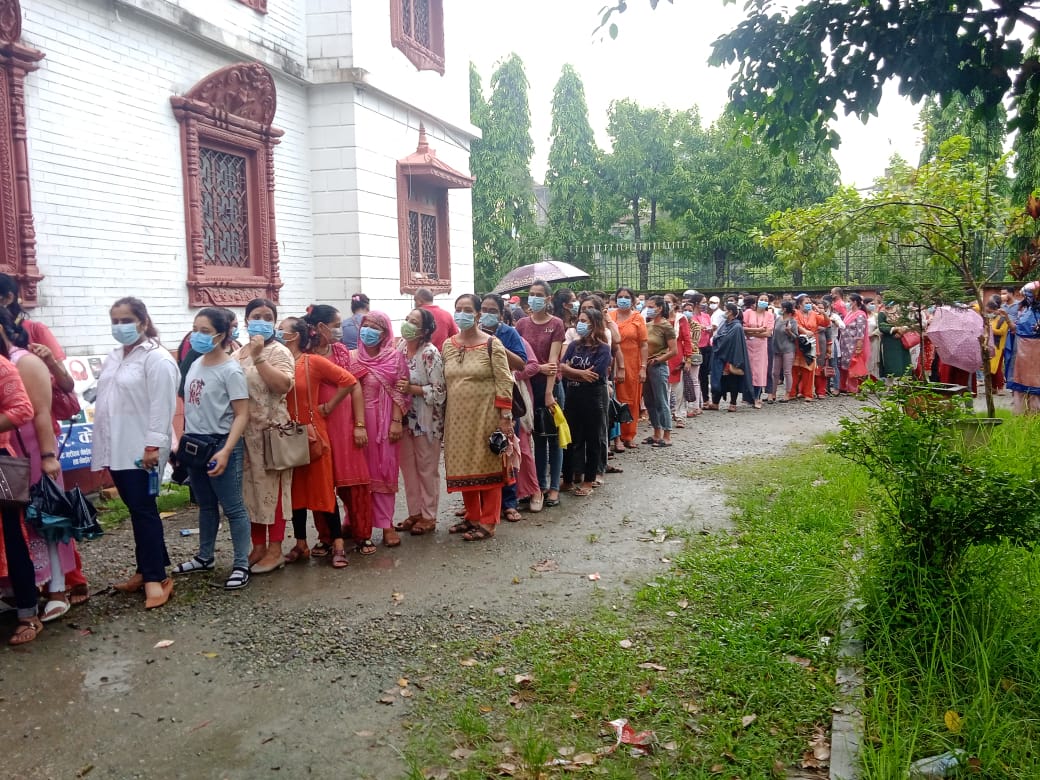 At the Birendra Sabhagriha, a bank employee was debating whether to join the serpentine queue or not.

“I thought of getting the jab after seeing the devastation of the second wave. The vaccine might protect me if I get Covid by chance, but I’m afraid to enter the Sabhagriha because of the long queue,” she said on condition of anonymity. “If I go home without the jab, I might be criticized by my colleagues but if I stand in line, I might get infected with the virus.”

Eventually, she got in line and got the Chinese Verocell jab after two hours.

Vaccines arrived late to Biratnagar and after the devastation of the second wave, more people now want to get vaccinated, resulting in long, unmanaged queues outside vaccination centers.

On July  25, the District Vaccination Coordination Committee released a press statement stating that it had received 68,997 doses of the Verocell vaccine to be given out to residents. Among them, 7,500 doses were allocated for government employees, banking sector employees, airline staff, security personnel, school and university teachers, and public transport drivers and their assistants.

Biratnagar’s vaccination drive began on Monday, July 26, and is expected to continue till July 29, Thursday. Three centers were designated to give out the vaccine — Birendra Sabhagriha, Koshi Hospital, and the Nepal Family Planning Association office. Biratnagar began providing first dose vaccinations on Tuesday with 26,500 Verocell doses for the people in the age group 55 and above. The city is also providing second doses to those who’ve already received the first.

According to Ramesh Karki, public health in-charge for Biratnagar Metropolitan City, they are well prepared for the vaccine drive and are focused on better managing the queues and ensuring physical distancing.

“The unmanaged queues were due to last-minute cancellations at the Nepal Family Planning Association office as regular vaccinations for infants were also scheduled for Monday,” said Karki.

Nepal has received a slew of vaccines in the past few weeks, with over a million of the Johnson & Johnson vaccine arriving via COVAX along with 1.6 million doses of the Verocell, out of 4 million doses purchased by the Nepal government. The remaining 2.4 million doses are expected to arrive over the next few days.

While earlier vaccination drives were largely limited to the Kathmandu Valley and other urban centers, the current campaign is seeking to vaccinate Nepalis across the country. However, given the mismanagement of the drive, there are fears that the vaccine centers themselves could turn into hotspots for the coronavirus.

“These people belong to the most aware and well-read section of society and yet, they did not obey physical distancing,” said Niraula. “It is problematic and may breed more cases of corona.” 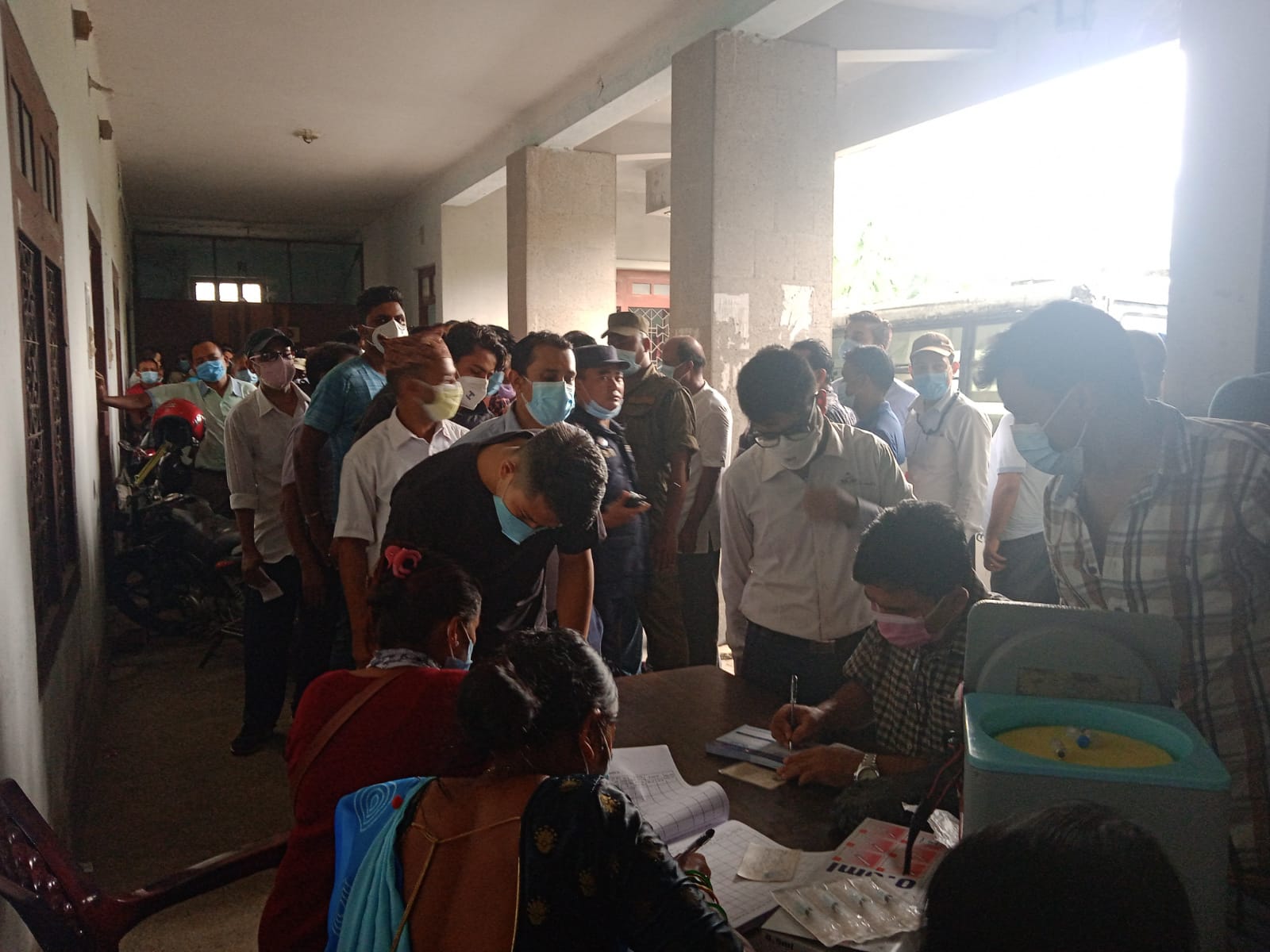 On Tuesday, one more vaccination center was added to distribute the crowd better but there was very little change in the crowding and the long lines.

The vaccination drive, however, comes as a major sign of relief for Nepalis in Province 1. Even though only select groups are being given the vaccine, there is hope that the drive will soon be expanded to incorporate others. Officials also expressed concern that some sections of people were expressing doubts about the vaccine, led primarily by misinformation circulating on social media. More people getting the vaccine could dispel this hesitancy, they hope. Morang has also received 46,000 doses of the Johnson & Johnson from the federal government and will soon decide on the date, category, and model to distribute the vaccine, said Niraula.

Lockdowns with stern prohibitions on public movement remain in place in cities like Itahari and Birtamode. Nearby Urlabari also went into lockdown on Tuesday, expected to last for a week.

“If cases continue to increase at an exponential rate, we will not have any other choice but implement another lockdown,” said Chief District Officer Niraula.

According to Amar Dev Yadav, vaccine coordinator of Biratnagar Metropolitan City, 3,500 people have received both doses of the Verocell vaccine and roughly 8,000 had received a single dose until Monday.

On Monday alone, Biratnagar saw 72 new cases of Covid-19 and four deaths and on Tuesday, there were again 72 new cases and 1 death. 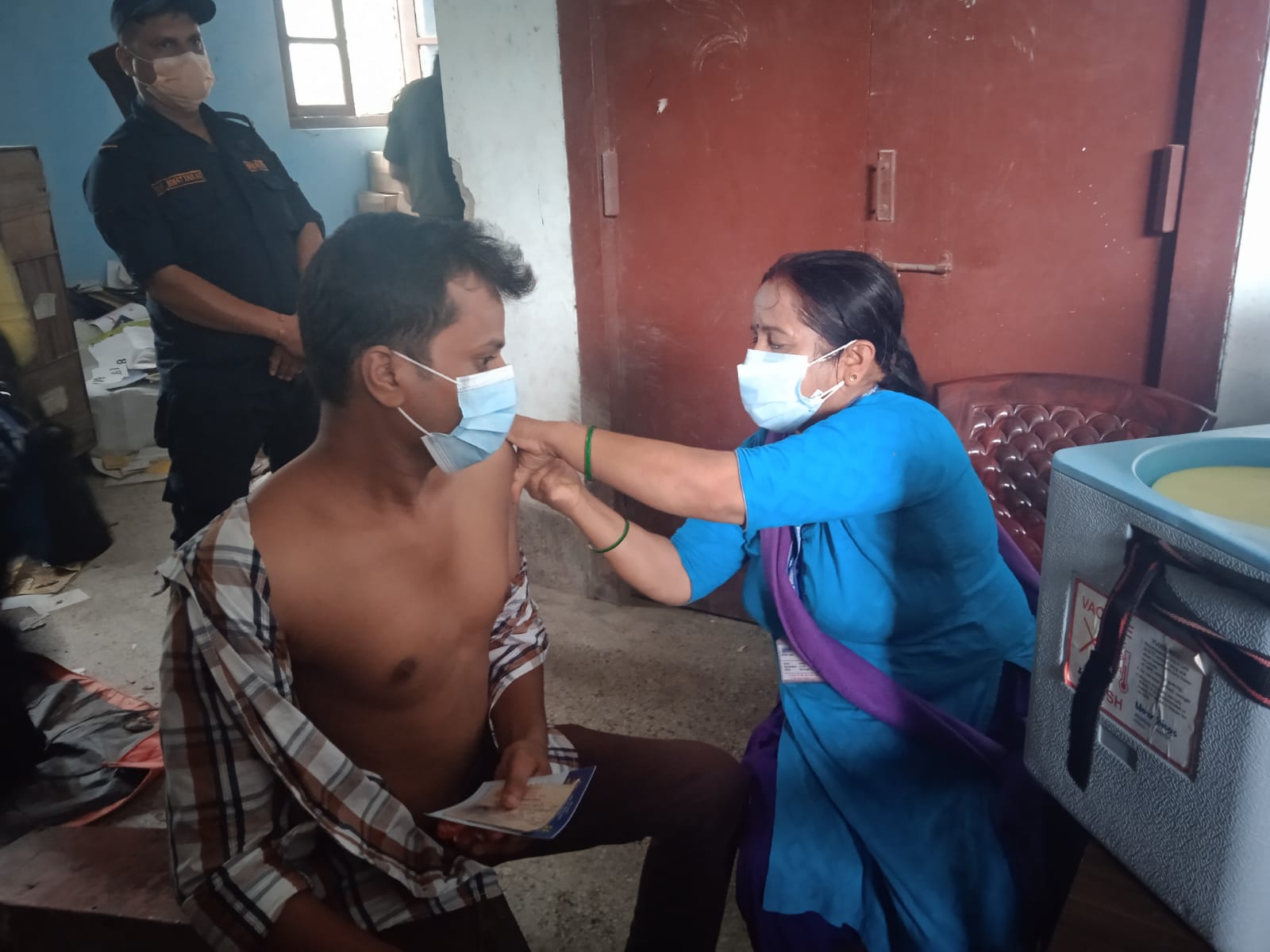 The coronavirus numbers have gone down only because testing has decreased, but the government would have you believe otherwise

Kathmandu Valley goes into lockdown from Thursday, buying some precious time to prepare

As most Covid-designated beds are already occupied, the authorities will have to ensure that the health care system is prepared to deal with the second wave.