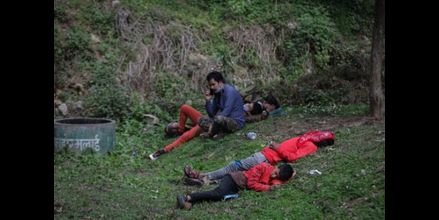 Decision on lockdown after weighing risks

Nepal has remained in strict lockdown, with severe effects on the economy, since 24 March. The government has come under pressure to rethink the ban as thousands of people continue to flock out of Kathmandu due to hunger and sheer desperation. More than 15,000 people have left after the lockdown despite resistance from the local government.

The total number of Covid19 cases reached 47 on Thursday after two more people tested positive for the novel coronavirus. The newly infected include a 55-year-old woman from Udayapur and a 14-year-old boy from Sarlahi, according to Bikash Devkota, spokesperson from the Ministry of Health and Population.

The boy had recently returned from India and was hospitalised with flu-like symptoms. Authorities have started tracing other people who might have come in contact with both. Meanwhile, the government has sent a fresh supply of medicines and Covid19 kits to Udayapur.

According to MoHP, nine Covid19 patients have been sent home after successful recovery.

On Thursday, the Nepali Congress urged the government to release former secretary Bhim Upadhyay who was arrested a day earlier for allegedly spreading false information through social media. In a statement, NC leader Bahadur Singh Lama described Upadhyay’s arrest as an infringement on his constitutional right to the freedom of opinion.

The Kathmandu District Court granted permission to keep Upadhayay in police custody for investigation for upto three days. Upadhaya was arrested under the Electronic Transaction Act 2063 that has been repeatedly misused by the government to clamp down on dissidents.

Samajwadi Party and Rastriya Janata Party Nepal, the third and fourth largest party in the federal parliament and coalition partner in Province 2, have merged to become Janata Samajwadi Party. The party was registered with the Election Commission on Thursday, hours after the two parties merged into a single political entity, in a dramatic turn of events.

The parties hastily concluded the merger amid reports that some leaders of Samajwadi party were planning to split, taking advantage of the new legislations on the formation of political parties pushed through ordinance earlier this week.

JSP leaders have accused prime minister KP Sharma Oli of abducting one of their leaders in order to initiate the split.

South Asia is expected to see an estimated 22.1 percent decline in remittances in 2020 due to the economic crisis induced by the Covid19 pandemic, according to the World Bank. More than 5 million Nepalis work in various countries across the globe and remittances, coming mainly from India and the Gulf, comprise 30 percent of Nepal’s GDP.

“The projected fall, which would be the sharpest decline in recent history, is largely due to a fall in the wages and employment of migrant workers, who tend to be more vulnerable to loss of employment and wages during an economic crisis in a host country,” WB has said in a statement.

A tenacious and perceptive witness

A steady rise in new Covid-19 cases in the past weeks proves community-level spread is here, warn public health experts, but the government remains in denial still

Hospitals across Nepal have denied treatment to patients with Covid-like symptoms. So far, they have not faced any consequences

The path to war

Nepal prepares for war with the British

In two separate incidents in recent times, frontline workers have been assaulted and beaten up by relatives of patients.