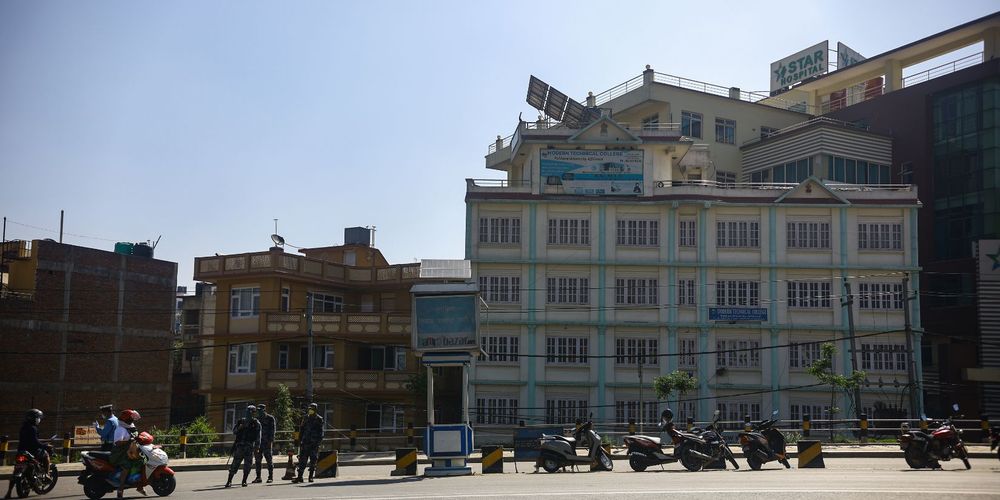 The Supreme Court ruled on Tuesday that it was illegal for health facilities to deny treatment to patients under any pretext. Responding to a writ petition filed by Nepal Bar Association, a single bench of SC Justice Manoj Kumar Sharma said that health facilities must admit all patients, including those with Covid19, as long as beds are available, while taking necessary measures to protect staff and facilities from exposure to the virus. The SC’s ruling comes at a time when many private hospitals are refusing to admit suspected Covid19 cases while medical professionals are refusing to attend to cases of flu.

Over 300 US citizens stranded in Nepal due to the nationwide lockdown returned home on a Qatar Airways chartered flight on Tuesday. Western countries have been repatriating their citizens after Nepal decided to partially lift the ban on international flights upon the request from embassies in Kathmandu. Dhananjay Regmi, CEO of Nepal Tourism Board, told the Record that more than 7,000 tourists are still waiting to be repatriated. European Countries have already evacuated some of their citizens, while Britain and Australia are planning to charter rescue flights later this week. The Nepal government is facilitating the repatriation of tourists stranded in various parts of the country.

The police arrested a ward secretary for allegedly evicting a tenant on Tuesday only because she was a nurse. According to authorities, they were investigating charges against Narayan Acharya, a secretary of Ghorahi sub metropolitan area, after a former tenant accused him of throwing her out based on Covid19 fears. The victim, identified as Sirjana Khadka, is a nurse at Ghorahi-based Buddha International Hospital, DSP Sumit Khadka of Dang district police told the Record. Following reports of discrimination against medical professionals, the goverment has announced that landlords who try to evict their tenants working in hospitals and medical centres will be punished by law.

Nepalis stranded across various entry points bordering India extended their protests into Tuesday, demanding the government to open the border and allow them to enter. Authorities, however, have continued to deny them entry in what they claim is a measure to prevent the possible spread of Covid19.

After briefly lifting restrictions last week, the government has once again barred entry along nearly all India-Nepal border points including Sunauli, Gaddachauki, Banbasa and Darchula, even as thousands of Nepali migrants continue returning from various Indian states every day. Kedar Nath Sharma, a spokesperson for the Ministry of Home Affairs, said that the district administration is making necessary arrangements to provide them with safe passage after a mandatory 14-day quarantine. Tek Singh Kunwar, Darchula’s deputy chief district officer, said the local administration in coordination with security agencies is taking care of those stranded.

NHRC redirects its budget for the Covid19 emergency

The National Human Rights Commission has returned an unspent budget of NPR 20 million to the government in order to allocate it on prevention and control measures for Covid19. In a statement, Bed Prasad Bhattarai said that the apex human rights body was returning all allocated budget except overhead expenditures and other urgent miscellaneous expenses in view of constraints faced by the government whilst tackling the pandemic. 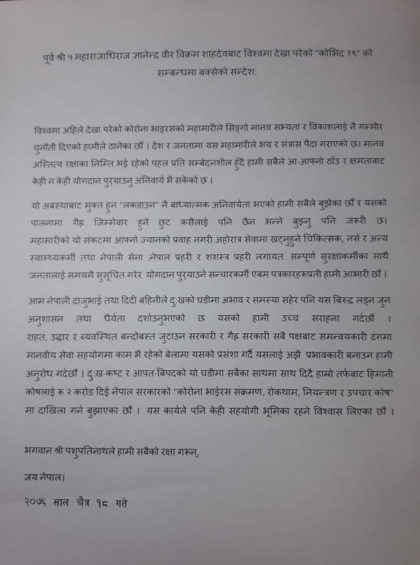 All three tiers of the government are having a hard time managing resources. On Saturday, the government decided to borrow loans from international lenders in order to meet the budget.

Hospitals outside Kathmandu to be enabled for testing

The government is preparing to assist more hospitals to conduct Covid19 tests in the midst of claims by health experts that the small number of diagnoses could be a result of a dismally inadequate number of testing.

Bikash Devkota, spokesperson at the Ministry of Health and Population, said that work is underway to enable more health facilities across Nepal to conduct Covid19 tests. According to him, authorities are targeting to test at least 1,000 samples each day.

As of Tuesday, the government has only tested 1,050 samples for Covid19, out of which only five have been tested positive. Speaking at the press conference on the same day, Dr Khem Karki, an expert with the ministry, said that all medical staff providing frontline services for Covid19 now have access to PPEs.

“We want them to be able to make good use of the protective equipment in order to prevent infection,” he said.

The maze of the migrant labour channel

Chandra tries to control a growing demand for more Awards led by his son Baber but reveals an acute sensitivity to the position of the monarch and steps in to help an errant son-in-law in serious trouble with the British in India.

Nepal’s migrant laborers are particularly vulnerable to the Covid19 outbreak in the absence of basic healthcare or job security.

Are Covid19 patients getting the care they deserve?

A raging pandemic combined with a lockdown can greatly stress mental health. Reduce exposure to the news, eat and drink well, exercise, and seek help if necessary.

Tuberculosis kills an estimated 17,000 people every year in Nepal, and with Covid-19 and the development of drug-resistant strains, this number is only likely to increase further.