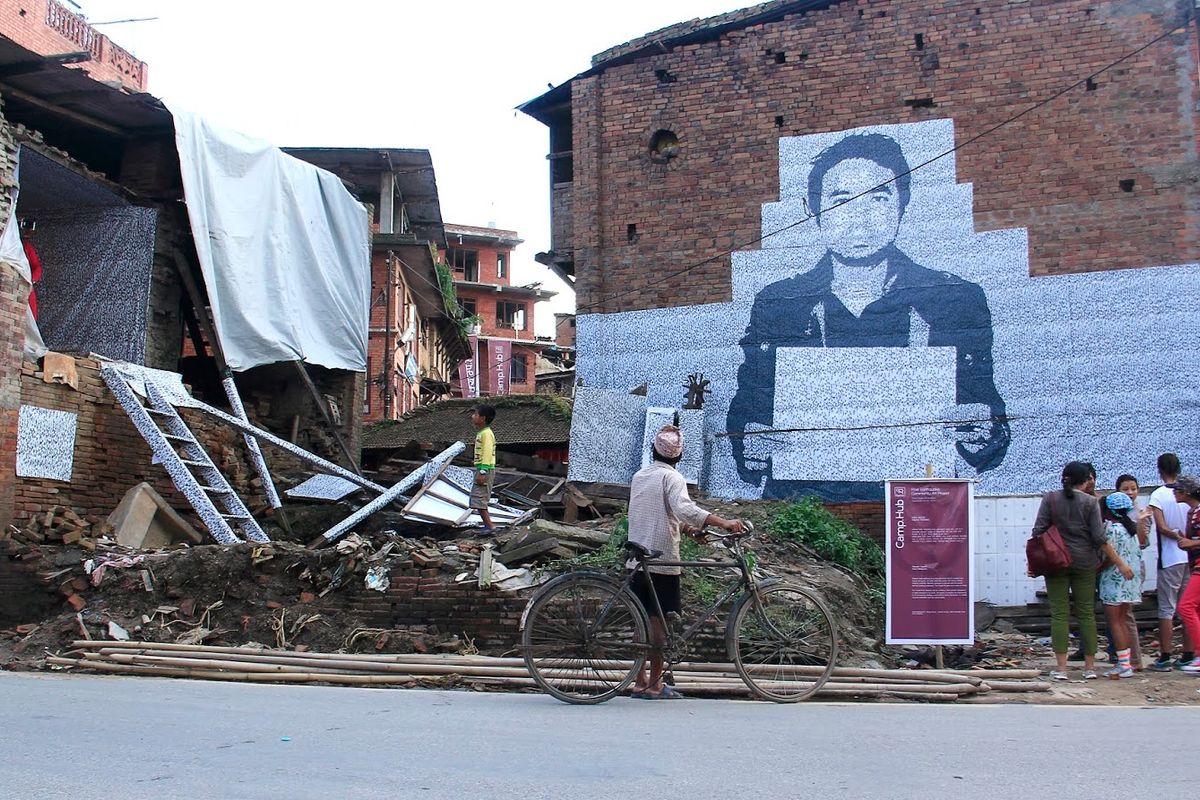 'Silent Reflection' by artist Rakesh Yakami was installed in the area where his house once stood. The project was part of Camp.Hub, a community art project led by Artree Nepal in Bhaktapur's Thulo Byasi after the 2015 earthquake. (Photo courtesy: Artree Nepal)

In September 2019, I visited Sindhuli for a three-day-long workshop for girls aged 11-16 that aimed to break down concepts of ‘power’ and ‘representation’. On the first day, when we asked the girls to introduce themselves, we found that many of them were reluctant to even say their names. As we frantically encouraged them to say their names or speak a little louder, I saw our limited time quickly slipping away. One of the outputs for the workshop was to prepare an exhibition of artworks created by these young girls. They dutifully arrived every day, chaperoned by the organizer, but only a handful of them participated. We returned to Kathmandu, heavy-hearted.

This experience taught me that all art, no matter how personal, is laced with the influence of society and culture. Working artistically with communities requires engagement. In Nepal and elsewhere, urban artists often travel to rural communities to work with locals. The rationale behind such projects is a combination of activism, awareness, and cultural exchange. Such projects are often donor-funded, time-bound, and come with set criteria regarding the desired outcomes, often in the form of an exhibition. But putting together an exhibition is not enough; communal art practice requires more than just an end product.

Community art must be “created and produced by and with community members that combine significant elements of community access, ownership, authorship, participation and accountability”. It does not just demand community representation, but also ownership. The important question that arises post completion of such art ‘projects’ is if and how locals continue to engage with art. For a layperson, an exhibition or a piece of art may not matter as much as what they take away from the project.

Often, when artists or facilitators from urban centers travel to rural areas to engage with local communities, they do not understand the context of the community. Residencies, grants, and workshops encourage artists to isolate an issue and try to either represent it or somehow rectify it. The structure of such engagement and its limitations may end up oversimplifying the situation, leaving no long-lasting impact.

It is of course not every artist’s responsibility to work with communities or look for ways to ‘benefit’ society. But the present third generation of contemporary Nepali artists appears to be striving towards a new movement of experimentation, social engagement, and socially conscious art practice.

Manish Lal Shrestha, a multidimensional visual artist, calls his practice ‘art production’ rather than ‘creation’ because of the scale of engagement in his projects.

“When the art piece is large scale, more people are involved and when there are many people, an impact is felt,” says Shrestha. “You can do individual independent research sitting in a studio, but when you start producing art, you have to somehow link it with society. When you do that, resources are exchanged.”

In Shrestha’s “Project 1336”, which was exhibited at the 2017 Kathmandu Triennial and later in Beijing, he asked women gathering in courtyards of Kathmandu to knit socks. The primary inspiration behind this art piece was Shrestha’s mother, who started a cottage industry to give jobs to people.

“My mother truly inspired me to be an artist,” he says. “It is important to develop entrepreneurship in art. Even if there is no direct impact through art, there can be some impact through entrepreneurship. Such structures can exist within art. People may have no idea or intention but when they see the end result they understand their contribution.”

Shrestha’s belief is that it is important to not just give art an aesthetic or emotional value but engage with the question of capital. For minority artists and social practitioners, art can often be an attempt to address issues of capital redistribution, or establish artistic and curatorial processes that redistribute resources equitably across class, caste, and gender lines.

But at the same time, there are also instances where urban artists capitalize on community art to turn a profit.

“Sometimes, people boast about wood carving done by local people which they bring to sell in Thamel or other expensive places. They profit off such labor,” says Hira Bijuli Nepali, theatre artist and president of the Karnali Arts Center, “What we want is people to respect the work and give back to the community somehow.”

The very question of deciding which community to work with demands a lot of introspection. Especially when selecting rural or minority communities, there is a risk of getting the priorities all wrong.

“People from Kathmandu go to different remote places to do theatre about handwashing using soap or using toilets. These issues are important but they do not fall within local priorities,” said Nepali.

Well-meaning outreach efforts may fail to succeed if the complexities of the new environment are not properly understood. Visual artist Sunita Maharjan was a fellow at a month-long residency project working with earthquake-affected Tamang weavers in Gatlang, a village in northern Rasuwa. The residency was conceptualized to explore how indigenous Tamang weaving could become a source of income.

“We had finalized the designs but we couldn’t get the material from local artisans as required. There was not enough wool for weaving and they couldn’t get more wool as they couldn’t buy more sheep. Also, locals did the weaving only in their spare time so they were not fully invested in it,” says Maharjan.

The project became too costly and it eventually failed as it failed to understand the context within which the art practices are rooted. Maharjan also points out that there were instances where the facilitators and instructors were unable to critically engage with the locals as they failed to tailor their practices to the local context.

“In one of the workshops, one of our instructors was constantly talking about water from the fridge, which was an alien concept for the people there,” she says. “It might have been a small thing but the fact that we didn’t think about it is significant.”

Artists can learn from instances like these and perhaps tailor their engagements towards respecting the local knowledge, instead of arriving from outside and imposing foreign concepts onto locals. Instead of direct engagement from outside, it is often better to find bridges like local artists or activists who can help translate the project to local participants more effectively.

Maharjan, who is a founding member of the art and education enterprise Srijanalya, recounted their experience of developing a school curriculum infused with art projects suggested — and to be implemented — by local teachers.

Such bridges are important because they can help outside artists understand local nuances and contextualize their work. At the same time, artists from outside should know when to truly hand over the mic to locals. Urban artists and practitioners have access to grants and artist funds, which rural artists often don’t.

“We don’t have such technical human resources. We are not well versed in writing grant proposals. Even our website has not been updated for a long time,” says Nepali of the Karnali Arts Center. “When Kathmandu people travel to Mugu, huge expenses are spent in travelling back and forth. With that money, we can build infrastructure in Mugu.”

Collaboration among artists of different backgrounds and communities is important but in such engagements, it is important to note that the process itself is social.

“Product is just five percent. Process is everything,” says Sheelasha Rajbhandari of the artist collective Artree.

Members of the collective often work within their own communities, exploring their own histories and traditions. Even when they work with other communities, they attempt to engage locals in the conception of the project itself.

“After the 2015 earthquake, we didn’t come up with our Camp.Hub project on our own,” says artist Mekh Limbu, who is also a member of Artree. “Rather, Thulo Byasi community members helped us conceive it and even funded the project.”

In the end, an ethics has to develop around artistic practice and commission-based projects oriented toward the community. Outside artists must remain open to their own vision being radically changed via community critique. Art cannot possibly absolve itself of the social or the political. Thus, the process of creating art comes laden with repercussions if not well thought out and thus runs the risk of being superficial.

As we wrap up our conversation, Nepali from the Karnali Arts Center displays a smile as electric as his name.

“I don’t know if I have answered your questions,” he says. “Maybe you wanted something artistic. But this is all politics.”

The article was produced as part of the Danfe Arts open call for art writers. Danfe Arts is a space for young and emerging Nepali artists to bring forward their visual art practices while creating dialogue around their work.

Editor's note: The banner photo in this article has been used as an illustrative example of community-based art, not commission-based urban-led art.

Shuvangi Khadka  Shuvangi Khadka is currently working as a researcher at Samriddhi Foundation. She is interested in reading and writing about society, gender, and sexuality.

During my time, writing was considered almost sinful. But I still wrote.

This week on Writing Journeys, US-based journalist and writer Sanjay Upadhya recounts his time working at The Rising Nepal under the Panchayat and the lessons he’s learned along the way.

The fishing village and the stolen boat

Digital art for a digital world

Meet six young Nepali artists with stories to tell, styles of their own, and a passion for art that’s digital.

In this edition of Writing Journeys, Tom Robertson shares hisown insights on learning to write well, especially during thislockdown.

Noodle, Nepal’s first digital music marketplace, is looking to provide musicians with an equitable income and fans with an avenue to support the artists they love.