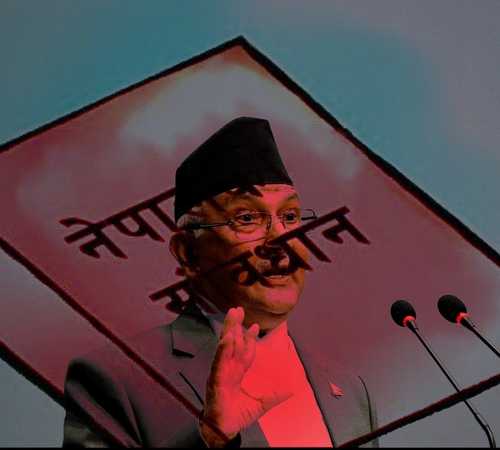 As the Constitutional Bench of the Supreme Court begins the continuous hearing of at least 12 petitions filed against the December 20 dissolution of the Lower House by Prime Minister KP Sharma Oli, questions remain regarding the constitutionality of the chief executive’s actions. While previous constitutions had included a provision that allowed the prime minister to dissolve the House and call for fresh elections, the current 2015 constitution has pointedly excluded that clause.

The Office of the President, while approving of Oli’s action, had cited Article 76 (1) and (7) and Article 85 of the Constitution. While Article 76 (1) says that the “President shall appoint the leader of a parliamentary party that commands majority in the House of Representatives

Lawyers for the petitioners have argued that the Supreme Court take into account the recordings of discussions by the second Constituent Assembly’s Constitution Drafting Committee to better understand the intentions of the drafters.

The Record spoke to a number of former Constituent Assembly members who were directly involved in the constitution-drafting process to gain some insight into their intent while writing the statute.

There was no parliamentary obstruction to the prime minister [Oli]. The government’s policies and programmes were endorsed by Parliament and everyone was supporting him in dealing with the Covid-19 crisis. He [Oli] dissolved Parliament after failing to resolve the party's internal issues, in a completely unconstitutional move. What he did was undemocratic and that is why seven of us ministers resigned en masse.

Now that Prime Minister Oli has dissolved the house by invoking Article 76, the main question is whether the prime minister should have opted for other options.

The situation was created by an internal party conflict. At a time when Members of Parliament from his own party had registered a vote of no confidence against the prime minister, he had two options: resign or go for a fresh mandate. He decided to go for the latter.

Given the current political development, the prime minister’s move was right. There is no need to interpret the Constitution as the matter is before the Supreme Court. However, it is not true that the Constitution forbids House dissolution. In fact, when the Constitution was being written, I had demanded a footnote on certain provisions, such as Article 76.

Furthermore, what the Constitution does clearly mention is that a motion of no confidence cannot be tabled until two years after the appointment of the prime minister (see Article 100).

Uday Nepali Shrestha, member of the Constitution Drafting Committee (nominated by UML as a legal expert)

I don’t want to comment as the case is before the Supreme Court. I am also a former bureaucrat so I would prefer not to speak on the matter for now.

In consideration of the frequent changes in government, the new constitution included some restrictive provisions limiting the prerogative of the prime minister. It was well discussed and we agreed on the provision.

But we have those provisions because we agreed to include them. So the prime minister’s move is unconstitutional and undemocratic. This has been our party’s [the Nepali Congress] unanimous decision. However, we wait for the court verdict and will abide by it even if it is not in our favour.

To ensure completion of the mandated five-year term of Parliament, we endorsed a provision that bars political parties from registering a vote of no confidence against the prime minister for at least two years. Further, the party tabling the motion needs to show a majority in Parliament before the head of government can be replaced and cannot initiate another motion for a year after the first failed attempt.

Nepal’s Parliament has been dissolved four times in the past before completing its mandated full term. The Supreme Court has sometimes revoked the government’s decision but not always. The prime ministers often misused their prerogative rights and dissolved Parliament whenever they felt uncomfortable running the government. Apart from political instability, frequent dissolutions caused huge economic losses while conducting mid-term elections.

So we have removed this provision from the 2015 Constitution. The parliamentary system was defamed because of the prerogative of the prime minister. That’s why we included a new provision in the Constitution to ensure stability.

We have included six clauses in Article 76 of the Constitution. Based on these provisions, the Parliament can attempt at least six times to elect a new prime minister. The prime minister can only dissolve Parliament if all measures fail.

The committee never discussed giving prerogative right to the prime minister so that he can dissolve Parliament whenever he wishes. I hope the parliament-secretariat has audio recordings of the discussions during the finalisation of those provisions. The Supreme Court can ask the secretariat for the recordings and study the intent of lawmakers.

Bhadra Sharma  Bhadra Sharma is a Kathmandu-based freelance journalist. He is also co-author of the book 'Impunity and Political Accountability in Nepal'.

These women spend all day carrying and transporting bricks. They represent the changing face of the construction industry in Nepal.

From the fields of Kapilvastu to the Supreme Court

While provincial and local officials have professed ignorance, locals and opposition party members allege that businessmen and those close to the UML have received vaccinations.