A centuries-old tradition of piercing the tongue in order to appease the gods continues to this day. 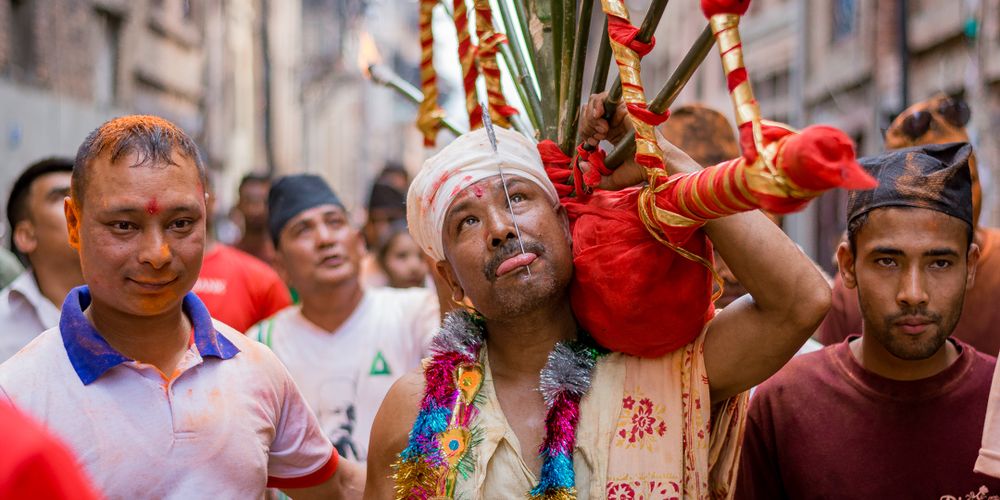 Buddha Krishna Baga Shrestha marches around the city with the mahadwip on his shoulders. (All photos: Saurav Thapa Shrestha )

During the Malla era in the Kathmandu Valley, the settlement of Bode was located in Shankhakot, near the Nilbarahi forest. An inscription on an ancient stone spout built by one Harshavir Thanju in the Nepal Sambat 777 refers to the settlement as Bu De (बुंदेय्), where ‘Bu’ (बुं) refers to flat lands and ‘De’ (देय्) to town. Bu De was thus named after its flatlands and farms.

The original Bu De settlement was under the protection of the tantric god Nilbarahi, one of the four barahis of the Kathmandu Valley, whose unearthly servants — bhoot, pichas, khyak — farmed alongside the people and helped them. But soon, the ghostly entities began to terrify the locals, forcing the entire settlement to move a kilometer away, to the current location of Bode. However, even after they migrated, the hauntings did not stop, which led the locals to seek out a Vaidya dhami. They soon met Bhimdatta Karmacharya, son of Bandhudatta Karmacharya, in Devpatan. Bhimdatta came to Bode and set up tantric traps all over the place and advised that nobody work in the fields for a month.

One khyak arrived at Bode through the west gate and Bhimdatta’s tantric trap stopped it from entering. The khyak, who turned out to be the right-side gatekeeper of Nilbarahi, was captured. The khyak’s long hair was cut, his long tongue pierced with iron needles, and he was paraded around town. The khyak asked the villagers to let him go and in return, he would never return to Bode to bring wretchedness; he would be prepared to pierce his tongue around the same time each year seven times; he would shield and protect everyone in Bode from epidemics, starvation, earthquakes, excessive rainfalls or droughts; and he would empower Bode’s people.

However, as the khyak was Nilbarahi’s servant, Bhimdatta and the Bode people began to fall sick. Nilbarahi himself appeared in one of Bhimdatta’s dreams to express his anger. The locals performed a kshyama (forgiveness) puja but the kayak lived up to his promise and returned for seven years to have his tongue pierced by the locals. Bhimdatta then requested the people of Bode to continue with the tradition.

Thus was born the tongue-piercing festival, or jibro-chhedne jatra, which is conducted as part of the annual Biska Jatra in Bhaktapur.

On the last day of the Nepali Bikram Sambat calendar year, locals undergo a purification ceremony where they trim their nails, shave their heads, bathe and clean themselves, and cook their own food. In the evening, the Naayo Pama, or community chief, performs a puja on wood brought from the Nilbarahi forest and puts on a bonfire (guńshi choyekegu). The Karmi Naike, who is the person who performs the tongue piercing, puts a tika from the ashes of the bonfire on the foreheads of all those who will get their tongue pierced. After that, the latter are forbidden from eating, having any contact with women, or touching dogs. It is believed that if these restrictions are abided by, the tongue will not bleed when it is pierced.

On the first day of the Bikram Sambat year, pasta thayegu, or a ‘regretful musical ceremony’, is carried out on the premises of Mahalaxmi Temple. It is conducted by the pasta guthi which is run by a Bhinduwa family who are descendants of Bhimdatta Karmacharya.

On the second day of the new year, the one who will get his tongue pierced takes a tour of various temples around the city, along with a musical procession of naaykhiń baja. He finally arrives at the dabu, a stage constructed at the rear of Bode Layaku Durbar, which is close to the Pancho Ganesh temple. The mahadwip, a semi-circular twelve-pronged lamp tied with bamboo, is prepared a day earlier and hung on the walls of the Layaku durbar.

The Karmi Naike and Naayo Pama both reach the dabu and the Nakarmi brings out a 10-inch-long iron needle that has been drenched in oil for a month to make it sterile. The Karmi Naike then pierces the tongue of the chosen one in front of a large crowd. With his tongue pierced, the man then loads the mahadwip on his shoulders and parades throughout the city. Finally, at the Mahalaxmi temple, in the presence of the Pancho Ganesh chariot, the needle is pulled out. It is customary to apply some mud from the Mahalaxmi temple to the tongue. The needle is then taken to the house of the devotee who had his tongue pierced, who then comes along with the puja to Nityanath, near Mahalaxmi temple. The needle is then hammered into the wood at the Ganesh temple.

For many of the past years, Buddha Krishna Baga Shrestha has been volunteering to have his tongue pierced and continue the tradition. Although painful, it is a custom that is maintained to this day to preserve the divinity of spiritual expression.

Saurav Thapa Shrestha  Saurav is a freelance photographer and graphic designer. He is a fan of Nepalis culture and heritage manifestations.

Leaders across the political spectrum react to hastily enforced ordinances

The Making of the Gorkha Empire: Part II – The Ruling Class

Why the Gorkhali court was plagued by intrigues and conspiracies

Nepal opens up for tourists again