In memory of Kamla Bhasin

In memory of Kamla Bhasin

Gita Rasaili reflects on her admiration for the famed feminist icon, and their one and only meeting. 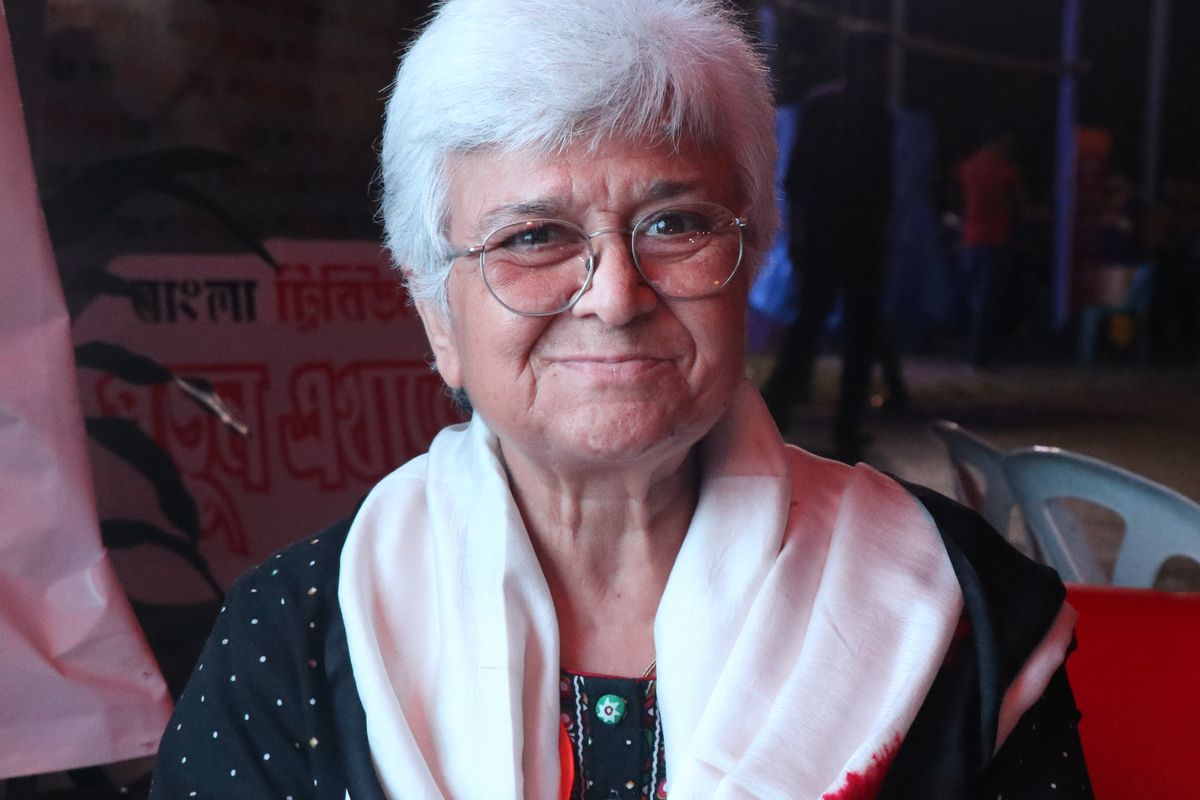 One of my first memories of Kamla Bhasin is a photo of a grey-haired woman wearing glasses and a red kurta. The newspaper headline quoted her: “The fight against patriarchy does not mean a fight against men”.  It feels like a long time now that I have been reading and listening to this leader of leaders, but I regret that I discovered her late.

Kamla Bhasin is a celebrated name in the global feminist movement. She devoted her entire life to women’s liberation. She had the power of a thousand women. She believed that unity among women was necessary in the fight against patriarchy.  Among the many ways she acted on this conviction, it was her leadership training course that brought her recognition and was also my path to finally meeting her.

My own struggle with discrimination started early, even before I knew there was a word for this burden that seemed to come from nowhere. I later learned how discrimination had many faces based on caste, class, gender, geography, religion, and other arbitrary things that we do not choose. I cannot remember a time when I did not feel the need to fight against this oppression. I read about women leaders, from Rosa Luxemburg and Jenny Marx to Nadezhda Krupskaya, and was influenced by their struggles.

Then, I began to learn from Kamla Bhasin.

Her thoughts started to play in my mind. I can say she became my idol. Everyone wants to meet their idol and  I too wanted to meet Kamla Bhasin, but she always seemed out of reach.

A few years ago, while walking in Delhi, the photojournalist Usha Titikshu suggested spontaneously that we should meet Kamla Bhasin. “Please don’t tease me,” I told her, thinking it was an impossibility.  When I realized that Usha thought it was possible, I became excited. As it turned out, I would not get another chance for three years.

“There is good news for you,” Usha told me one day in Kathmandu, “Kamla has agreed to meet with you”. I was unable to attend one of Kamla’s training courses in Nepal, but Usha had managed to arrange a meeting.

My feet were not touching the ground. When I shared the news with my colleagues at Voices of Women Media, Nagma and her young sister, Swastika, decided to join. We fretted over and over about the meeting, even debating what to wear. I finally decided to wear a sports shirt that said ‘Women’s Premier League Football’.  We talked about how to present ourselves. Do we say ‘namaste’ or shake hands or give a hug? All of these thoughts were tumbling through my mind, hoping for the best possible connection, one I had long already imagined.

Dressed in my women’s football jersey, I headed to Tewa in Dhapakhel for the meeting. The closing session of Kamla’s training program was ongoing. I scanned the crowd and saw a familiar gray-haired woman to my right. I elbowed Nagma and nodded in Kamla’s direction. Our faces were glowing. I wanted to jump and shout.

At the close of the session, as people began to leave the room, Kamla leaned forward with her right hand on the floor and her left hand to her knee to stand up from her cushion. I wanted to reach out a hand to help her up. My feet were already moving in Kamla’s direction. But I stepped back, unsure and already thinking: “this woman is supporting thousands of women.  She doesn’t need my help getting up.”

The next thing I knew, Usha was introducing me and my friends to Kamla. We moved toward a nearby room, following her. As we walked, I noticed an umbrella and said, “Oh, your umbrella!” Kamla asked me, ‘How did you know?” I answered that I recalled her umbrella from a TED Talk. In that talk, Kamla had said, “Today it is raining so I brought this umbrella.” She was referring jokingly to the fire that burned inside her for women’s struggles, and what the rain might do to that.

“That fire is our confidence,” she had said.

When I looked into Kamla’s eyes, I could feel her fire growing inside me.

Kamla noticed that one of the sisters accompanying me, Swastika, was very young. “How is it that I have such a young follower?”

Her question was answered once we were seated together, when the sharing began. Nagma recounted the disappearance of her father during the 10-year conflict when her mother was pregnant with Swastika. Her mother died giving birth. I too shared the torture, rape, and killing of my sister during the conflict, and the ongoing struggle.

Kamla listened.  Then she said, “So, at this early age…you are leaders.” It is hard to convey how important it was to hear this recognition.

Our meeting was short, but we quickly became close. Kamla shared photos of her children. We gathered around her like we too were her children. She even asked about my football jersey: “Do you play football or did you wear that for me?” she asked. I laughed and confessed. She instantly broke down any barrier between us.  She asked whether we could share our stories with the participants of the program.  We agreed and decided to stay that night at the venue.

In the evening, Kamla told the participants about us: “I am so moved to learn how these young women are living with their struggles.”

The meeting became very emotional.  After dinner, we all gathered to watch a documentary and then enjoyed dancing and singing together. I could not help but notice Kamla’s intimate relationship with each and every participant. With spontaneous and childlike energy, she inspired everyone to come forward to dance and sing. The film, the songs, the dancing, were all liberating for the women gathered there.

Today, she is no longer with us. It is difficult to accept.

I can never forget the image of Kamla stretched out on the floor, hands cupping her chin, watching the documentary. I found it difficult to concentrate on the documentary. This was an elderly woman who had seen this documentary many times but chose to be present with all of us. She could have left the room and gone to rest. She stayed.

That night, we had time to meet with other participants who had come from across Asia. The struggles of women connected Pakistan, Kashmir, and Nepal without borders.

In the morning, before departing, we told Kamla that we wanted to participate in a future training. She invited us to Himachal for a 2020 training and encouraged us to bring along Swastika and promised to cover her expenses. She encouraged us to work with the organization Sanghat and Pooja Pant, the director.

With that hope, we parted ways. We could not know that this would be our first and last meeting. The 2020 training did not take place due to the pandemic. We waited for things to improve and meanwhile, attended all of her online programs, sometimes with large numbers of participants. I used to join quite early to ensure a place in the virtual room.

On September 25, 2021, I saw a message on social media. My heart stopped. I checked all other social media. They were all expressing condolences and grief that Kamla Bhasin’s sun had set. Our wait to meet her again was over.

About two weeks before she died, Kamla urged all women to come out on the street to show solidarity with women facing renewed oppression in Afghanistan. She had transferred her leadership to all of us, to carry this agenda forward without her.

In many of Kamla’s training sessions, there would be a moment when she playfully yet seriously invited all of the women to whistle, a taboo in Asia. This was a symbolic challenge to the oppression of patriarchy. She left that whistle on our lips. It will remain, along with her memory.

In heartfelt remembrance of Kamla didi.

A nearly identical version of this article first appeared in Nepali in Naya Patrika on October 2, 2021. The author has revised this version and is publishing it in English with permission from Naya Patrika.