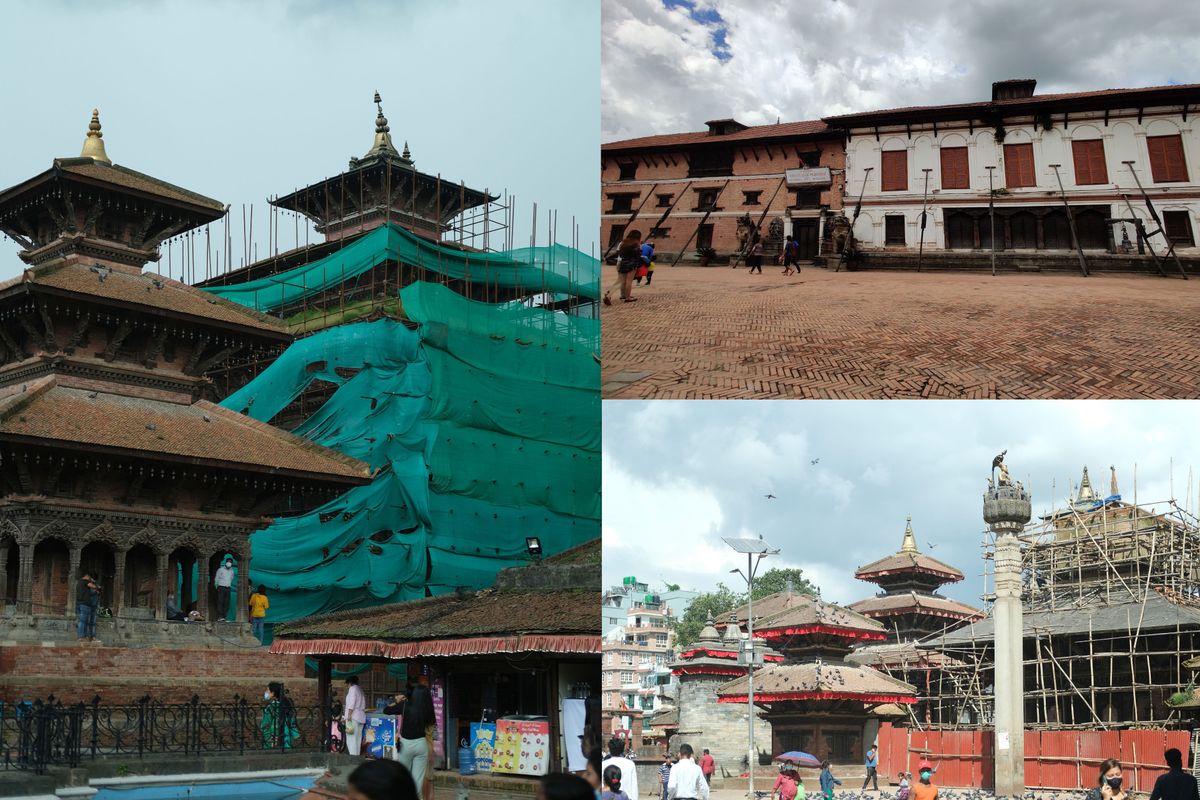 April 25 2015 was one of the darkest days in Nepali history. Thousands of lives were lost and even more, were left battered. Decades-old settlements and structures, including many historic monuments and heritages, were brought to the ground in a matter of seconds. Over six years after the earthquake, Nepal is still in the process of rebuilding.

A large proportion of historic heritages in the valley continues to exist as harrowing reminders of that disheartening day. In fact, of the 920 cultural heritages that were either destroyed or damaged by the earthquake, 425 of them have yet to be reconstructed, many of them in the three iconic durbar squares of Kathmandu, Patan, and Bhaktapur.

A brief stroll around these squares, however, can provide insight into why, six years later, some of Kathmandu’s most iconic temples and monuments have yet to be reconstructed. Bhaktapur Durbar Square in particular stands out from its Kathmandu and Patan counterparts with its absence of scaffolding and green construction safety nets. Reconstruction in Bhaktapur Durbar Square is largely complete, with most of its iconic structures back up. And locals believe this has to do with the way in which Bhaktapur municipality handled reconstruction -- prioritizing local ownership and local-led efforts over international assistance.

“Bhaktapur was able to swiftly reconstruct heritage sites because people here are conscious of the importance of heritage protection,” said Suman Dhaubhadel, a local resident. “We are satisfied with the reconstruction process as we too were involved.” 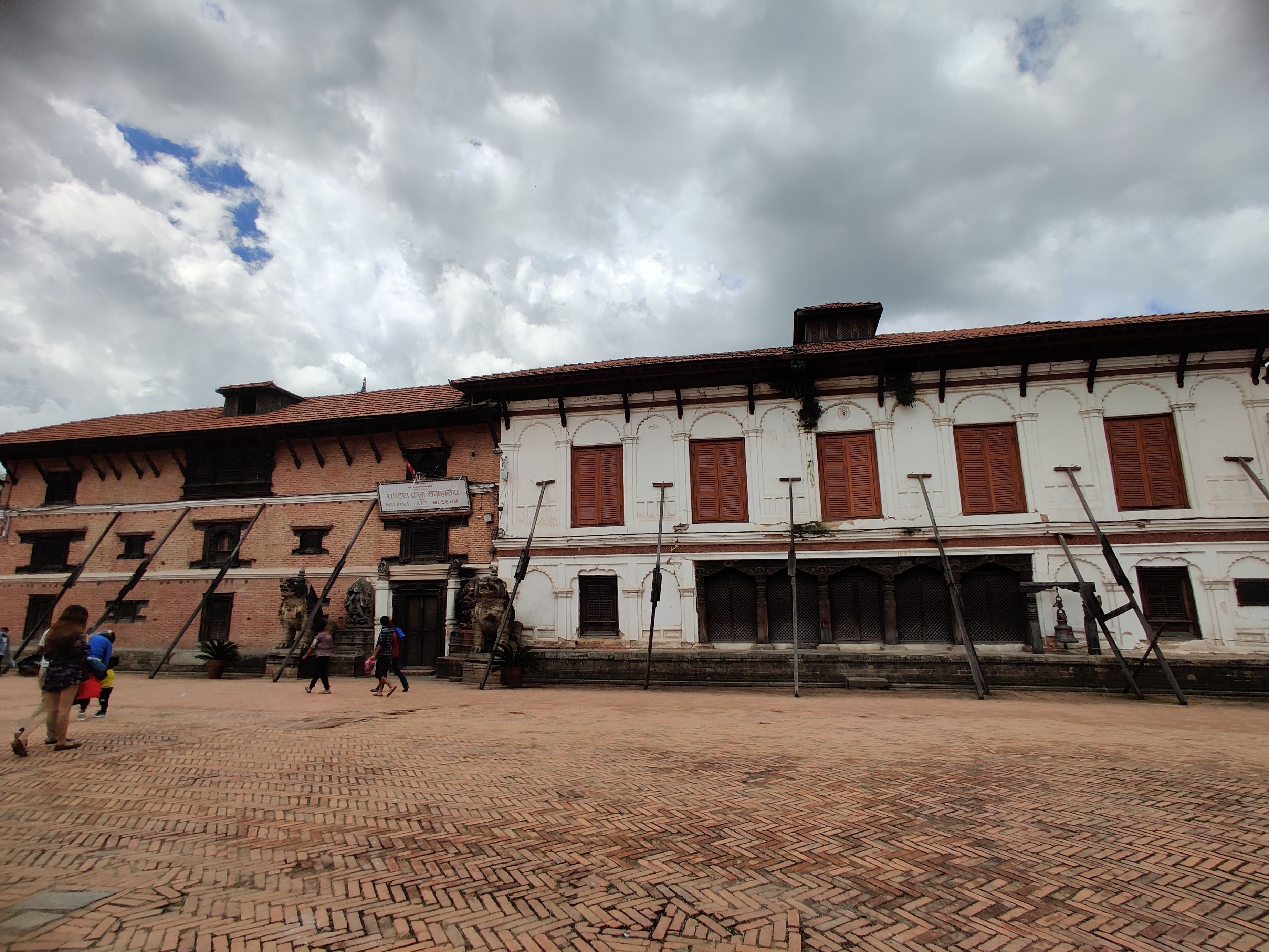 According to Sunil Prajapati, mayor of Bhaktapur Municipality, of the more than 120 monuments destroyed after the earthquake in Bhaktapur, the city has completed reconstruction of 108 monuments.

“The reconstruction process is still ongoing,” said Prajapati. “If the Nepal government had supported us with the purchase of wood, we would have completed reconstruction of even more monuments." 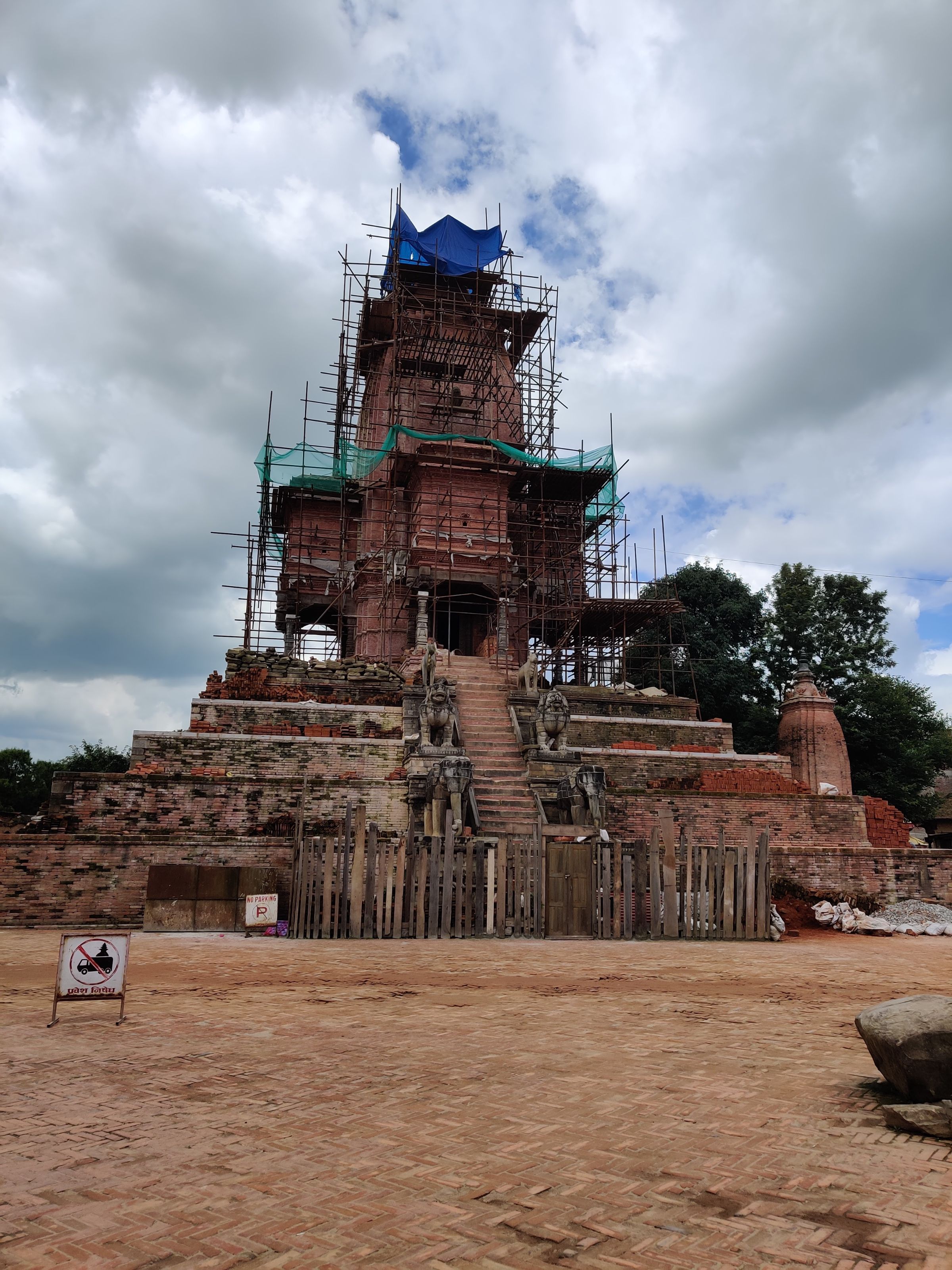 In a 2019 academic article, author Rupesh Shrestha, who was then working with the Kathmandu Valley Preservation Trust (KVPT) as an architect, writes:

“In many neighborhoods of Kathmandu valley, community-led organizations strongly associate themselves with their heritage and want more responsibility to reconstruct temples and shrines with community participation. Bhaktapur municipality even rejected the German Development bank’s (Kreditanstalt für Wiederaufbau- KfW) funding of 10 million Euros. The points of disagreement as stated by Bhaktapur Municipality is KfW’s insistence that the reconstruction contracts be open to a global tender process, hiring of international consultants, hiring technicians only through KfW, and the permission to use modern construction materials…”

In a conversation with The Record, Shrestha said that a major grievance for the municipality was KfW’s intention to mobilize German experts over local leadership.

“If you come over to Kathmandu Durbar Square, you’ll see huge posters and flags of China aid, or Japan aid, or US aid. Perhaps this was also something that did not sit right with Bhaktapur. As for Patan, I think the maximum of KVPT’s stakeholders were local, and we were able to meet the demands of international funders midway,” Shrestha said. 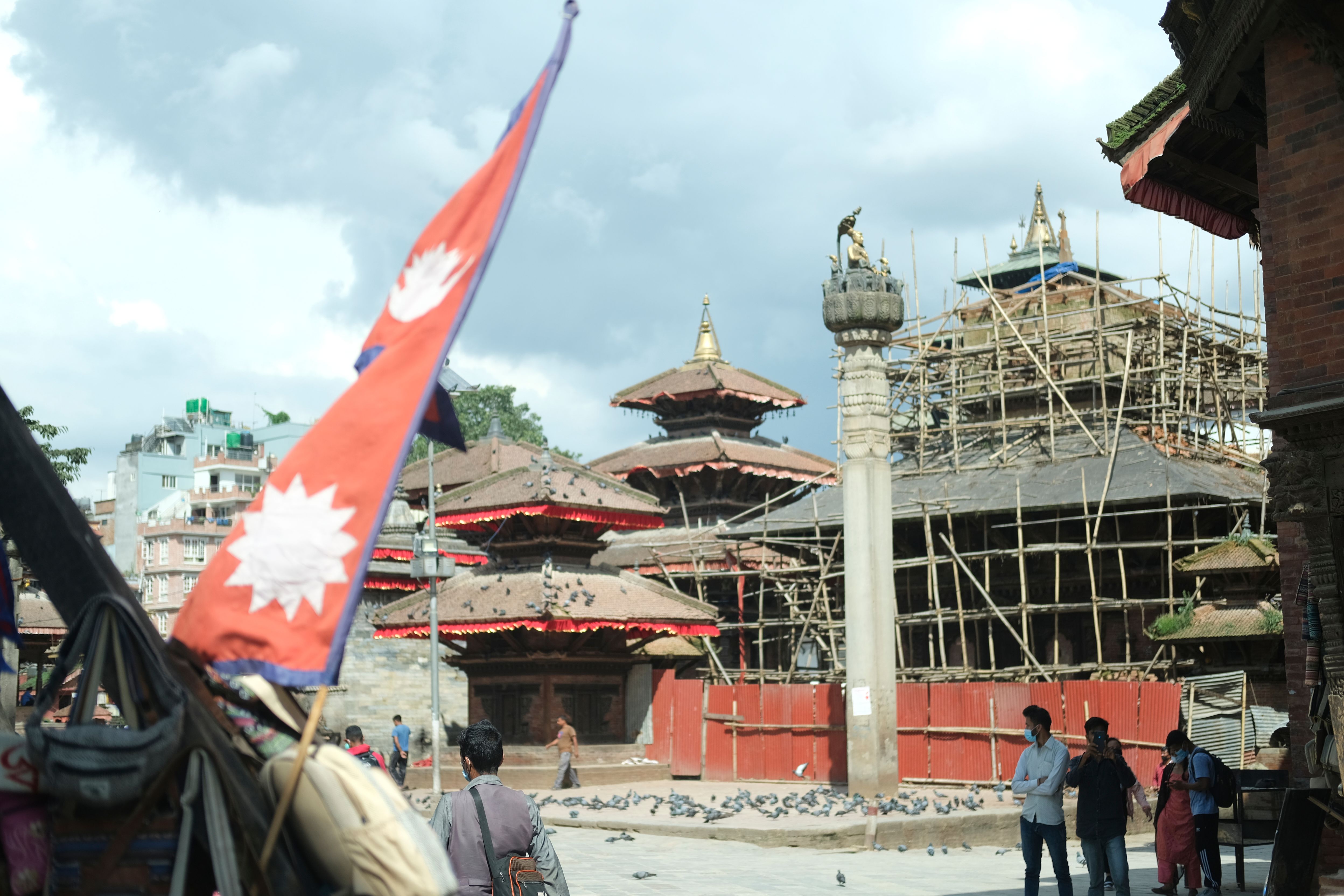 According to Shrestha, the problem lies in the general process of receiving international funding. Nepal carries out the projects and then receives portions of the fund as and when certain parts of the project are completed.

“In simple terms, you get money once you do the work,” said Shrestha.

Bureaucratic processes can hold up necessary funding when it comes to international aid but for local-led projects, the funding is either raised upfront, or can be accessed much more easily down the line.

Bhaktapur’s rejection of international funding also meant that fewer actors were involved, simplifying the process further. In contrast, reconstruction in Kathmandu, where many structures still remain draped in scaffolding, has received funding from a number of national and international actors, resulting in a hodgepodge of stakeholders.

“Simply put, a surplus of stakeholders and committees has made things difficult to work with,” said Sandeep Khanal, executive director of the Hanumandhoka Durbar Museum Development Committee, which is a body formed in 2008 A.D. to manage the Museum. “For instance, two similar temples right outside of the Kumari Ghar have two different rates of progress. One of them is being rebuilt directly by the Department of Archaeology while the other is being handled by the Kathmandu Metropolitan City. Part of the reason why so many monuments are still left to be rebuilt is that there are so many stakeholders.” 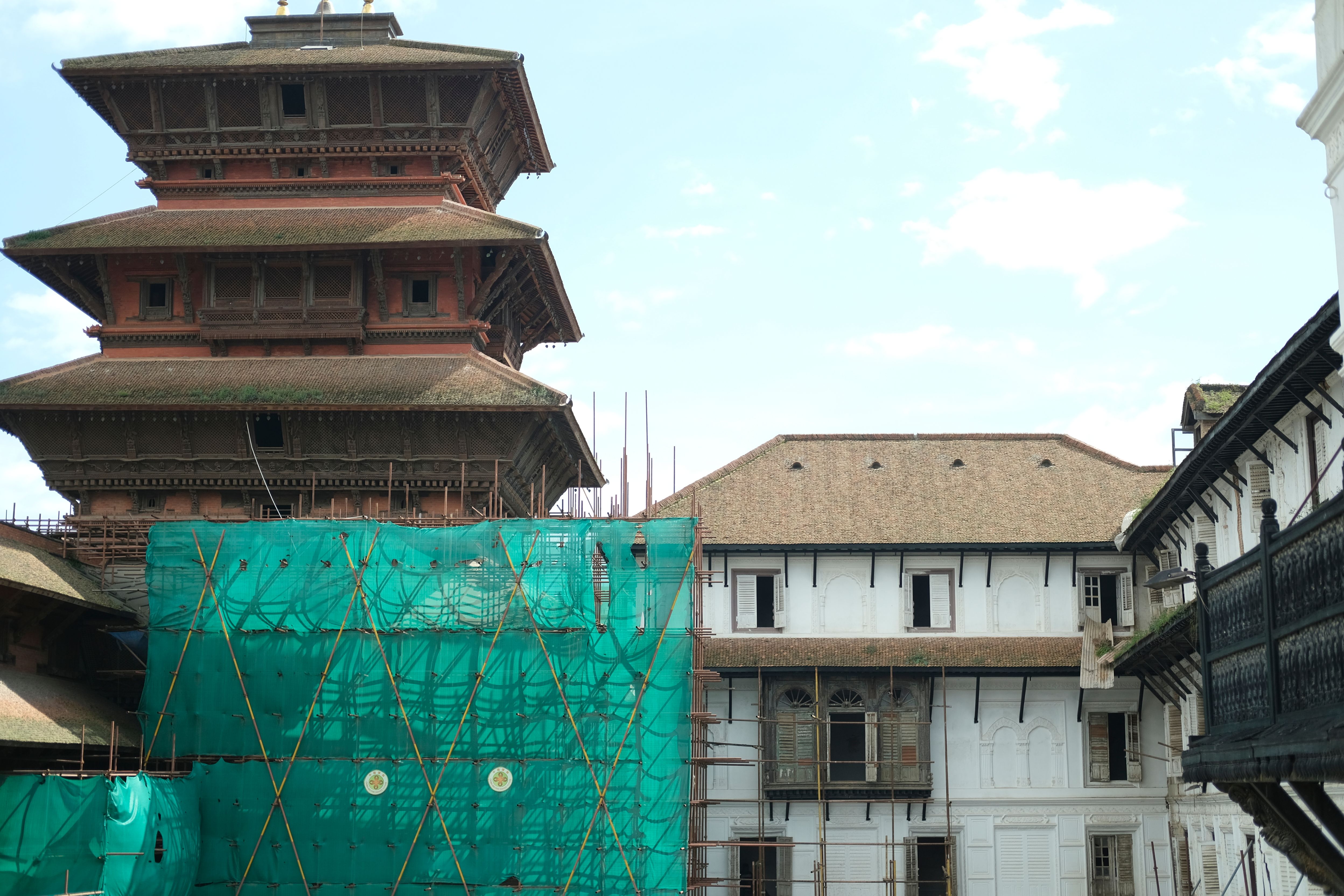 According to Khanal, of the 84 monuments that were affected in the Kathmandu Durbar Square area, over 30 have been completed, 12 did not require reconstruction, around 20-25 are still being reconstructed while 8-10 have not been touched yet.

Shrestha in his article also lists that conflict and competition between stakeholders is actually a major point of concern for the reconstruction of heritages. He explains that tenders for these projects are divided across international stakeholders like UNESCO, China, Japan, the USA; domestic stakeholders like the Department of Archaeology, Metropolitan governments, and even some guthis. The excess of these stakeholders running multiple minor projects has raised multiple issues ranging from a fight for construction materials to calling in political favors to get tenders.

Because different stakeholders are reconstructing different buildings, there sometimes arises a situation where one cannot start work until the other has finished. The Maju Dega temple is being reconstructed by Kathmandu Metropolitan City while the Kan Dev temple is being handled by the Department of Archaeology.

“But since the city has not completed the Maju Dega temple, the department can do nothing but wait for the project to be finished and the space cleared,” said Khanal.

Heritage conservationists have long been wary of the way in which the post-earthquake reconstruction work has taken place within the valley. In 2017, Kathmandu Metropolitan City’s reconstruction plans for Rani Pokhara invited massive protests from locals and conservationists. The city had planned to turn the centuries-old pond into a recreation space with an amusement park, coffee shop, and “dancing water fountains.” It was only after years of tireless campaigning that the pond was reconstructed faithfully as per its original design. 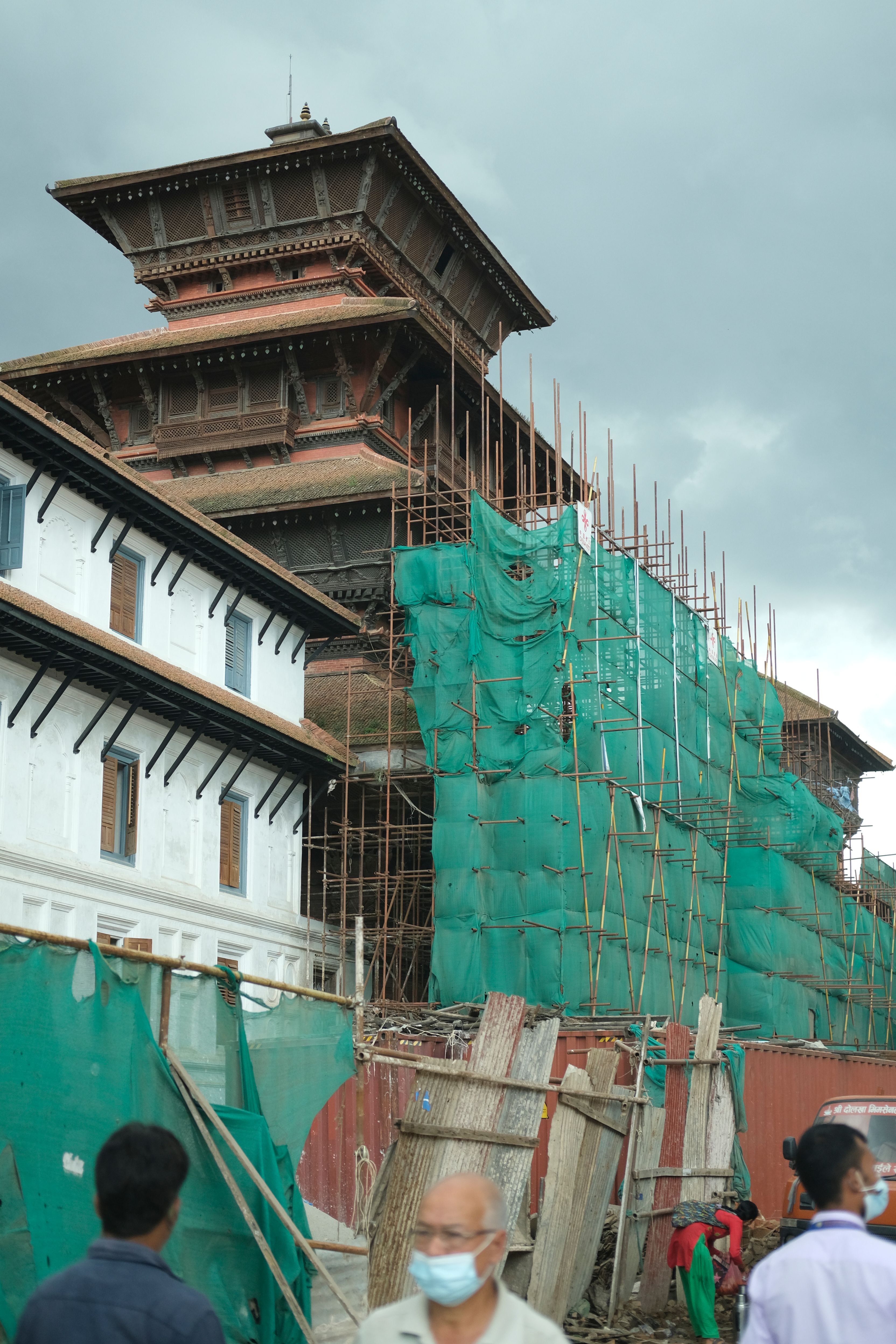 Heritage activist Alok Siddhi Tuladhar, who was an integral part of that campaigning, believes that a large problem with reconstruction is that the authorities do not allow local communities to take ownership. Part of the reason why Bhaktapur has made more progress is due to how close the municipal body is with the community, he says.

“They started the work early. The indigenous community has held influence over different levels of government, which has made the political system conscious of heritage conservation,” he said. “Further, skilled manpower is easily available in Bhaktapur and unskilled people contributed their labor. This happened in the reconstruction of Nyatapola Temple, which not only saved some of its budget but also formed a connection between the community and the monuments.”

There was little community participation in Kathmandu. Iconic buildings like the Gaddi Baithak and the Nautalle Durbar were reconstructed by the US and the Chinese governments, respectively, when local guthis could’ve done the job themselves, believes Tuladhar.

Locals around the Basantapur area instead report their own issues with the local government. According to Itish Shrestha, a fourth-generation shopkeeper in Basantapur, the municipality has done little to help with reconstruction.

“We have received no help from the government to rebuild [smaller] damaged patis and sattals,” said Shrestha, whose shop is located in an old wooden sattal next to Kasthamandap. “Most of the help we received was from a few guthis and that too was not a lot. We had to fix the roof of our sattal with plaster by ourselves. We were not able to fix it with traditional terracotta tiles, but we had no other choice.” 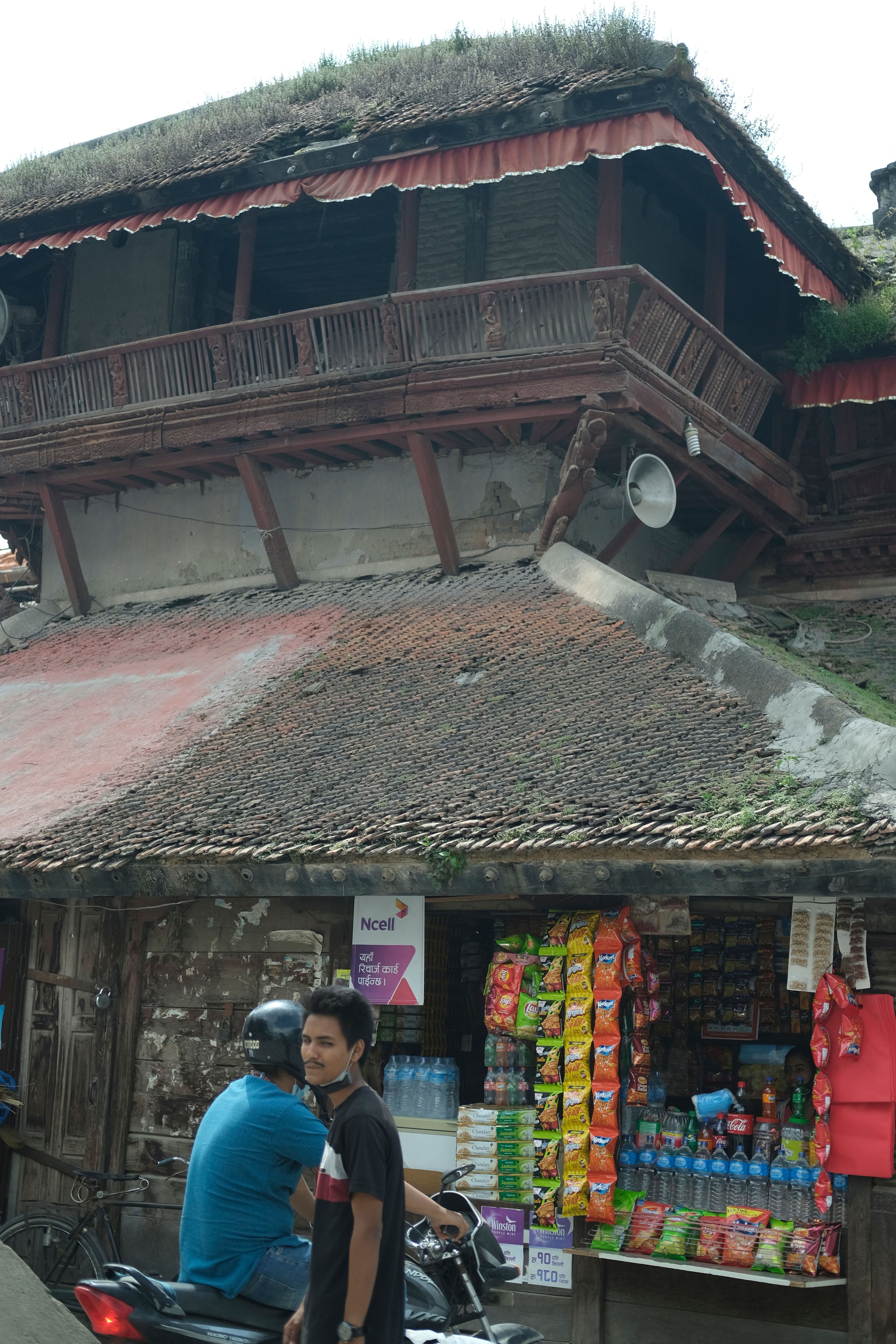 So why do national entities like the Department of Archaeology, despite all the hassles that come with third-party stakeholders, continue to put out reconstruction tenders? Would it not be better for Kathmandu and Patan to follow suit with Bhaktapur and carry out a unitary community-led heritage reconstruction plan that has minimal assistance from other parties?

“Yes, carrying out the reconstruction process as a single entity does make a lot of sense,” said Khanal of the Hanuman Dhoka Durbar Museum Development Committee. “But there are budget limitations. While the reconstruction of heritage is the primary responsibility of the Department of Archaeology, the immense pressure created by the earthquake meant that the department did not have the capacity to finance everything.”

It is to ease this burden that the Department of Archaeology allowed other local entities such as city governments, wards, as well as local user committees, to take charge of their own community-led reconstruction projects.

In a 2021 research paper that Shrestha wrote for the National Reconstruction Authority, he states that finances and fundraising are key challenges to community-led reconstruction. Here, Shrestha cites multiple instances where communities were unable to get the necessary funding domestically, and in some cases even failed to mobilize a user committee.

In particular, Shrestha recounts the cases of the Muchhen Aganchhen community and the Mu Bahal community in Patan. He writes:

“Muchhen Aganchhen community formed a user committee and applied for funding to Lalitpur Metropolitan City and NRA. Partial funding from Lalitpur Metropolitan City is approved. However, they have been unsuccessful in receiving funding from the NRA. The Mu Bahal community has not been able to form a user committee nor could start a fund-raising campaign. The community there wants to start fund-raising but has not consolidated their efforts like other communities and informed about lack of knowledge on funding application or bureaucratic procedures.” 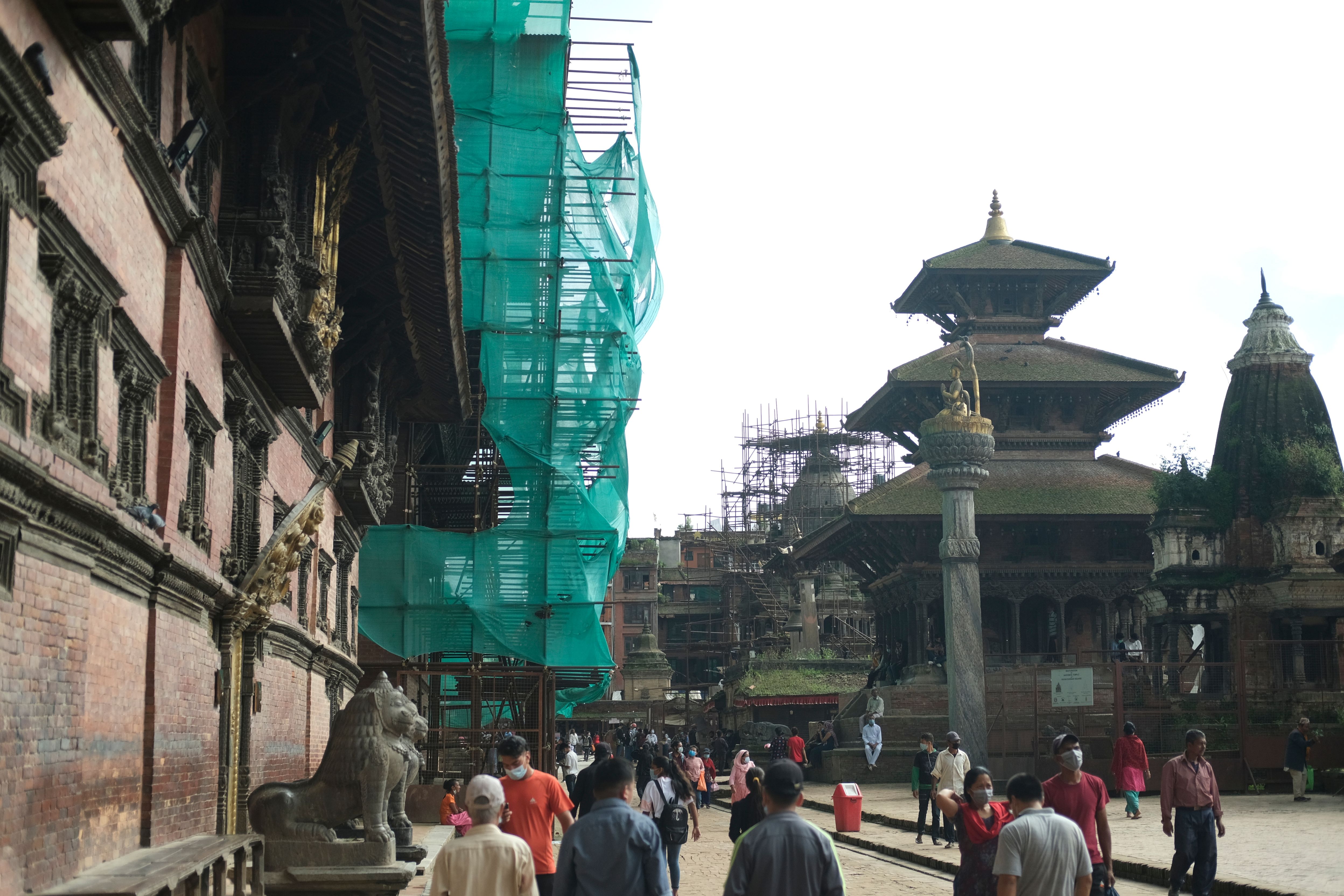 Reconstruction in all three durbar squares remains a work-in-progress. The durbar squares may never look as they did prior to the 2015 earthquake but the goal should be to get them rebuilt with input and ownership from the local community, say heritage activists. While areas such as Bhaktapur have found reasonable success in mobilizing local manpower and avoiding dependency on foreign aid, the same formula might not always be the right fit for Patan or Kathmandu, as each city has its own socio-political constraints.

Relying on a plethora of stakeholders and foreign funding might make some sense, but it has also resulted in a situation where the authenticity and ownership have been overshadowed by political convenience.

Shrestha the architect said lightheartedly, “You can’t expect to rebuild the Taj Mahal when you use the cheapest materials and outsource all the work.” 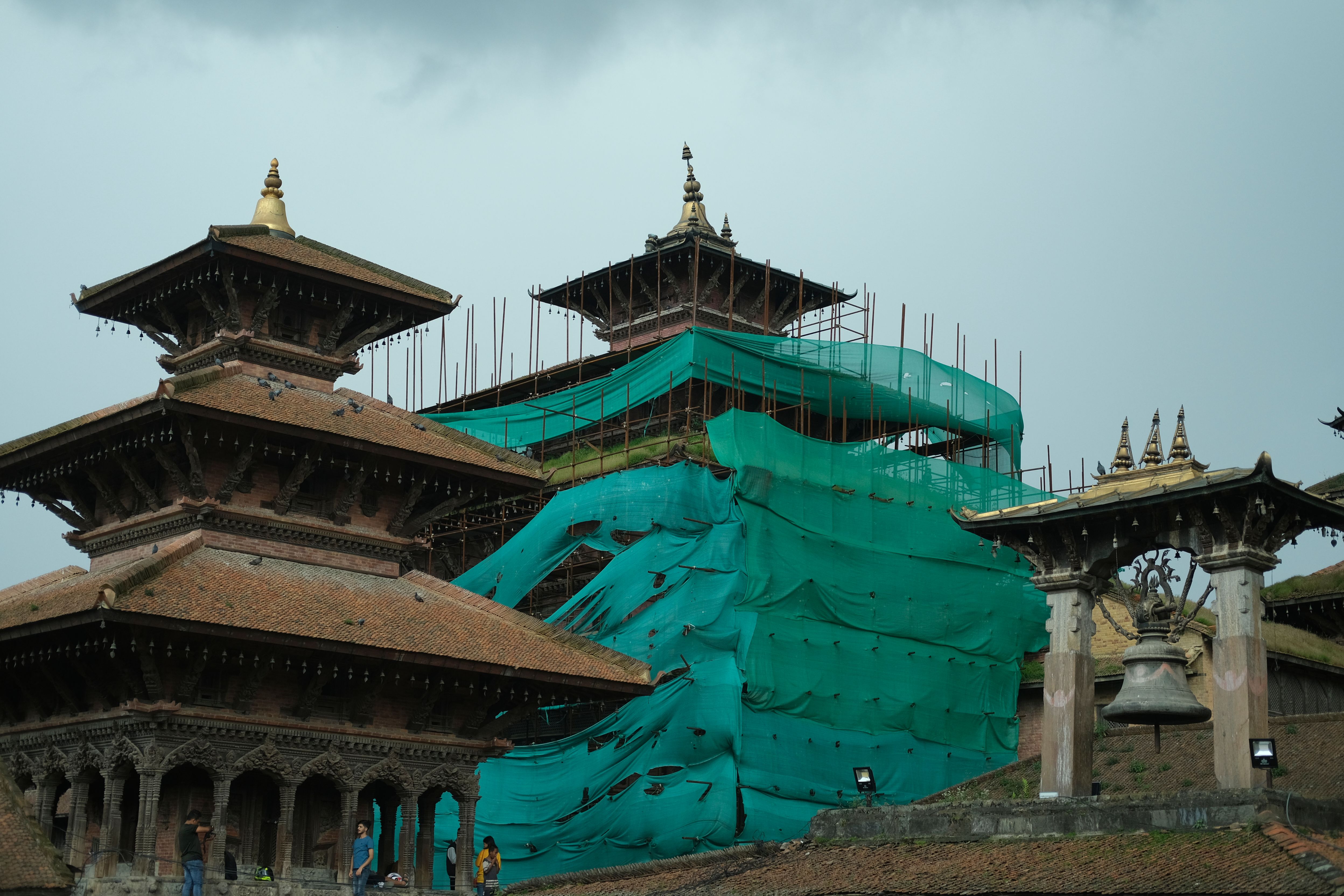 Sajeet M. Rajbhandari  Sajeet is a Media Studies undergraduate and a reporting intern at The Record.

Taking all means to retain power, Oli has indicated that he is heading down an authoritarian path

The networking of politics: families, funds, and favoritism

In the absence of formal institutions, individual politicians are burdened with raising funds for their campaigns and maintaining power, which in turn leads to unethical alliances.

The NHRC finally lists rights abusers publicly, but will the perpetrators ever be brought to book?

The ultimate revenge of the hill bureaucrats

The Covid-19 pandemic, with its demands for physical distancing, brings with it an opportunity to reorganise and reshape our cities