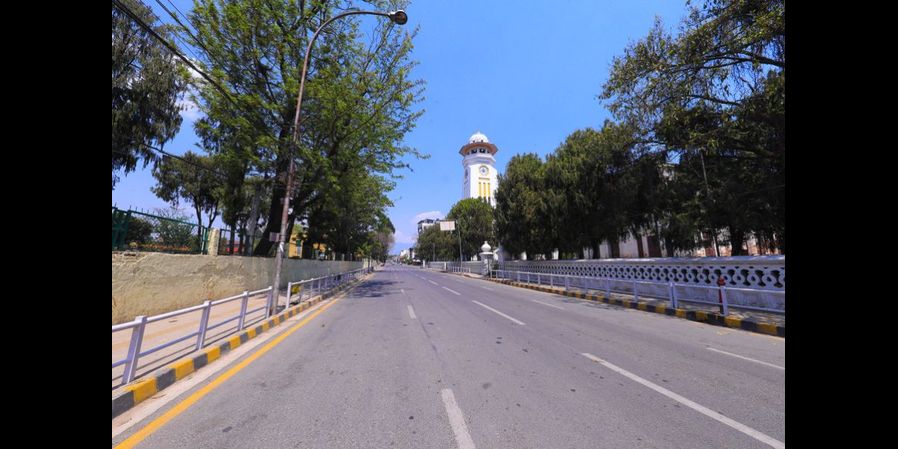 With coronavirus case numbers spiking rapidly, the chief district officers (CDOs) in Kathmandu Valley have got the government’s permission to enforce prohibitory orders from midnight on Wednesday. A meeting of the CDOs of Kathmandu Valley, which consists of three districts--Kathmandu, Lalitpur, and Bhaktapur--on Tuesday concluded that the districts should roll out new, stricter containment measures. The prohibitory orders will, for example, halt all transportation and services other than essential ones. The public will be allowed to venture out only to stock up on essential commodities and medicine. And the government has also granted the CDOs discretionary powers to ratchet up the measures to even enforce curfews, if need be. The prohibitory orders will remain in effect until Aug 26.

The four-month lockdown that was imposed earlier was lifted on July 22, after the number of coronavirus cases started declining, from a daily high of 700 to 100 or fewer. But case numbers started significantly spiking shortly after the lockdown was lifted.

On Tuesday, Nepal recorded 1,016 new coronavirus cases, the highest single-day tally, bringing the country’s total number of cases to 28,257. With 138 cases, Kathmandu has become the district with the highest number of coronavirus cases identified in a single day. Parsa, which is the worst-hit district, recorded 128, while Morang had the third-highest figures, with 108 cases.

The highest number of new cases are being recorded in the Terai districts. Among them, Parsa, Morang, and Nepalgunj--featuring Nepal’s major transit points with India--are also the districts with the highest number of health workers infected with the virus. The hospitals in these districts have run out of beds, and they suffer from a shortage of staff.

Tuesday marked the first time Nepal has surpassed 1,000 new infections in a day. On the day, Kathmandu Valley witnessed 205 new cases, Lalitpur saw 50, and Bhaktapur, 17. The sharp rise in case numbers is partly the result of more polymerase chain reaction (PCR) tests being conducted. The Health Ministry has claimed that a total of 13,461 PCR tests were carried out in the past 24 hours. Over the course of this pandemic, a total of 542,866 PCR tests have been conducted, which accounts for less than 2 percent of the total population of the country. And there are 7,676 persons in quarantine centres, while an additional 2,887 are confined to home quarantines.

But the government does not have exact data regarding the particulars around the contact tracing done on patients, whether an infection occurred owing to community transmission, or the travel history of patients. The ministry has only admitted that there are significant numbers of cases resulting from community-level transmission.

“We have not been able to break down the numbers and study them,” Dr Samir Kumar Adhikari, assistant spokesperson at the ministry, told The Record. “I don’t think the numbers really matter at this time, when it has been well established that we have reached the community-level-transmission stage. How we contain the mass spread of the virus should be the singular goal now.”

A robust containment strategy is paramount because Nepal has not reached the peak-infection stage yet, when cases could rise exponentially--with one person potentially infecting dozens of people.

Dr Adhikari emphasised the importance of creating public awareness as the most effective measure in beating the virus. “This is an abnormal time,” he said. “We have seen Covid patients not getting the required medical service--even if they go to hospital. That said, there is not much a hospital can do to treat Covid patients, as there is no medicine yet. So even if we identify new cases at a faster rate, we can only do so much for the infected person at this point in time.”

Lately, the government has been ramping up PCR tests. According to the ministry, 13,461 PCR tests were conducted just on Tuesday. “But testing alone will not contain the virus,” said Adhikari.

To deal with possible severe Covid cases, Nepal has added about 300 units of ventilators and intensive care units. The country has a total 946 ICU beds and 496 ventilators. However, the hospitals are running thin on staff, even as the beds are reaching capacity. And around 300 of Nepal’s 19,000 health workers have tested positive. To make matters worse, several hospitals are reported to have denied treatment to Covid-infected patients. Overall, Nepal’s stretched health system seems unprepared, across many levels, to handle the worsening health crisis.

Furthermore, the government has not been able to implement the one intervention emphasised by experts: contact tracing. That lapse is representative of Nepal’s health system, which is infested with problems. There is no coordination between the national and local agencies; there is a shortage of health workers and medicine supplies; and all decisions need to get sanctioned politically.

Right from the onset of the crisis, the government kept failing along many fronts. The country bought faulty test kits, and then encountered delays in importing them. For his part, Prime Minister KP Oli kept telling the public not to be afraid of a disease that was similar to the flu. Statements such as these from public officials are one of the reasons that many members of the public believe the coronavirus does not kill people. And it’s no surprise that the garbled messaging has led to people believing that Covid-19 patients can simply be cured if they were to drink boiled turmeric water, for example.

In the absence of a coherent Covid policy, the death toll has continued to rise. Seven more Covid-related deaths were recorded in the last 24 hours, taking the national death toll to 114.

The highest profile political leader to have died of Covid-19 is Subash Giri, Nepali Congress’s vice-president of Nawalparasi District. The Nepali political leadership started taking the Covid-19 seriously only after the virus started infecting leaders. Today, the list of Nepal’s Covid-19 cases also comprises parliament members, mayors, justices, and security personnel. And if the government does not get its response mechanisms in order, more patients--both leaders and members of the public alike--could soon join that list.

Bacteria and the Bagmati

Hundreds of foreign-bound workers are flocking to Kathmandu, scrambling to get vaccines and receive verified vaccinated certificates, only to be lost in a mismanaged system.

Green shoots at the grassroots

Dalit women have to overcome many obstacles in order to lead. The story of Nanumaya Gandarva, an elected Dalit representative from Rambha Rural Municipality, Palpa.

How peaceful is Nepal really?

What does peace mean to the Nepali people, especially the country’s many minority groups? The Record explores, and answers.

Two days after the end of lockdown, the spread of coronavirus has passed a new threshold

An agonizing wait for expectant mothers

With Covid-19 cases exploding across the country, soon-to-be mothers are becoming more anxious with each passing day.

New legislation seeks to end the existing blanket ban on the sale, cultivation and production of marijuana. It would also partially lift restrictions on the use of the weed for medicinal purposes.