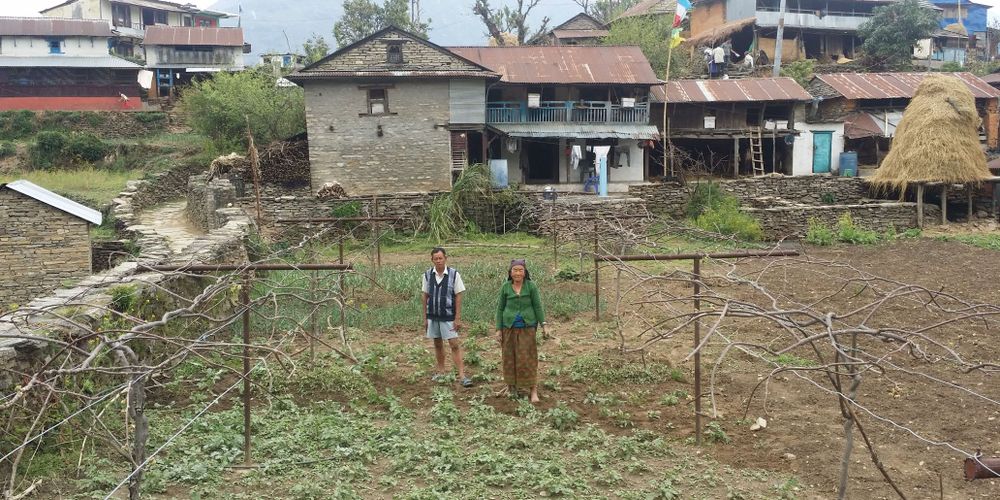 Over the last decade, kiwi fruit has emerged as a leading cash crop that could revitalize mid-hill villages burdened by urbanization and outmigration. According to Nepal’s top kiwi buyer, 100,000 Nepali farmers have already planted kiwis and are earning as much as ten times the profit they make from traditional grain crops. Yet poor and middle-class farmers -- who need such solutions the most -- are unlikely to benefit from the industry in the long run. As this young industry matures, it will serve as an important case study in whether cash crops can revitalize rural areas, or whether these areas are doomed to be depopulated in favor of urban centers and foreign countries.

According to Kiwifruit Association of Nepal Chairman Dr. Surya Pandey, mid-hill farmers can earn 100,000 rupees/ropani of land -- about $1,000 USD/500 square meters -- by planting kiwis and selling them at the Kathmandu market price of Rs 200-500 per kilo (USD 2-5). Contrast this to the profits made on rice, which the Nepali government kiwi expert Guna Raj Paudel estimates to be around 5,000 rupees/ropani ($50 USD/500 square meters), and it becomes clear just how much of a financial impact this crop can have. “Traditional methods and plants such as finger millet have made Nepalis poor,” says Paudel. "Now, from one ropani, people make 150,000 [rupees] selling kiwis.”

Unfortunately, poor and middle-class subsistence farmers who stand to gain the most from kiwi cultivation face barriers to success. For starters, kiwis have a much higher establishment cost than other crops due to their trellising and irrigation requirements. In total, starting a well-equipped vineyard costs approximately 1-1.5 lakh/ropani, an unaffordable amount for most of Nepal’s aspiring kiwi growers. To lower costs, farmers cobble together cheap, inadequate trellises using materials like bamboo. “You can still get production from a bamboo trellis, but it’s not adequate for commercial production,” says Paudel. “In our practical [demonstrations], it works for 2-3 years, and then it all breaks down, and the branches break too.”

Poor and middle-class farmers face an additional disadvantage in accessing technical support. Though kiwis require less labor than traditional field crops, complicated cultivation techniques are needed to produce high quality and yields. These techniques are best learned by visiting established kiwi vineyards, but growers in remote areas are rarely able or willing to spend their time and resources on such a trip. The poorest of the farmers are also the least likely to have access to government resources such as technical assistance, training, and subsidies because of favoritism and systemic inequities.

Even in areas with strong access to technical support, kiwi cultivation is a risky long-term investment for a population primarily concerned with its short-term livelihood. While the traditional high-yield grain crops grown by Nepali farmers lack commercial value, they provide a crucial food supply for rural households. In contrast, if a farmer converts her land to a kiwi vineyard, she might wait three years to pick her first kiwi and six to see a full yield. After this early sacrifice, profits are far from guaranteed. The young vineyard will face obstacles such as hailstorms, plant disease, animal pests, and volatile markets. “Abroad, there is certainty,” says Bhuwan K.C., a political leader and kiwi nursery proprietor in Boach, Dolakha. “Per month, there is a guaranteed salary. There are no guarantees here.”

Despite these obstacles, many farmers have rushed to plant kiwis after hearing of the great profits that can be made selling the fruit. Yet, while demand for kiwis in Kathmandu is high, the sustainability of that market is by no means guaranteed -- the quality of the fruit being produced is uneven, and there is likely to be a glut in supply in the coming years.

Sagun Upreti, the founder of Nepal’s largest kiwi purchaser, Nepal Packaging and Cool Storage (NPAC), and an eight-year veteran of New Zealand’s well-regarded kiwi industry, believes that Nepali kiwi farmers and entrepreneurs must modernize rapidly or face financial ruin. “If we don’t do anything for marketing or quality, there won’t be a future,” he says.

According to Upreti, farmers planted 300,000-400,000 saplings in recent years that have yet to produce fruit. Total fruit production should increase drastically as these saplings mature, cultivation practices improve, and kiwi farming spreads to new regions. Markets could be flooded with fruit during the ripening season, leading to a sharp drop in prices and financial troubles for farmers. “People are scared,” says Dinesh Sigdel, a kiwi entrepreneur in Bhotechaur, Sindupalchowk. “Many people have planted kiwis, and if there is a lot of production in the future, then where will we sell them? It could be that they end up being 20-30 rupees/kg.”

Farmers and entrepreneurs are already working to solve this problem by finding export markets for their kiwis abroad in places like India, Bangladesh, Tibet, and the UAE. Yet when NPAC attempted in 2016 to export 30 tons of kiwis from 14 Nepali districts to India, it faced unexpected complications. Indian inspectors performed quarantine and quality tests on the fruit and discovered that most of it was infested with fruit flies. The kiwis also failed to measure up in important international trade metrics such as size, seed count, and dry matter content. Despite NPAC’s hard work meeting international regulations for packaging and barcoding, these fruit quality problems meant it was able to export only two tons of kiwis, less than seven percent of its total supply.

The issues identified by Indian inspectors stem from a countrywide lack of knowledge, experience, and infrastructure for growing kiwis commercially. Most farmers admit that they have not yet mastered cultivation techniques and are learning as they go. According to Upreti, even Nepal’s model farms such as ICIMOD’s Knowledge Park do not follow commercial best practices. “In the country now, there are really only one or two good kiwi farmers,” says the kiwi expert Paudel.

If modernization of kiwi cultivation and other cash crops can provide a sustainable source of income for poor farmers, there is hope that Nepali villages can resist their current decline.

Harnessing Upreti’s commercial kiwi-growing knowledge from New Zealand, NPAC is at the forefront of a group of farmers, entrepreneurs, and government technicians working to modernize Nepal’s kiwi industry. Upreti travels throughout the country training kiwi farmers in commercial cultivation techniques, often without pay. To improve post-harvest processing, NPAC is building a $1.5 million USD packhouse and refrigeration facility in Dhading and hopes to have it completed in time to process and store this fall’s crop. In addition, NPAC, Sigdel and others are developing and marketing value-added products like kiwi cider, wine, and jam that have a longer shelf-life than fresh fruits.

While villagers’ incomes may rise with urbanization and foreign migration, many farmers lament the emptying of their villages and the accompanying losses of community, tradition, and closeness with family. Innovative farming practices, including new cash crops, may be the only ways to maintain the positives of rural Nepali life while still joining the modern market economy.

Over the next decade, kiwis will represent an early case study for a wave of new cash crops sweeping Nepal such as avocados, almonds, cherries, pecans, macadamia nuts, and dragon fruit. If modernization of kiwi cultivation and other cash crops can provide a sustainable source of income for poor farmers, there is hope that Nepali villages can resist their current decline.

Paradoxically, though, modernization of the kiwi industry seems just as likely to squeeze out subsistence farmers as to provide them with sustainable livelihoods. Upreti and Pandey agree that poor farmers with bamboo trellises can still benefit from kiwi cultivation in the present, but they foresee a much murkier future. Wealthy entrepreneurs have already invested in large-scale, well-resourced kiwi operations. These farms will likely produce higher-quality fruit and better yields than those owned by low and middle-income farmers. They are more likely to meet export standards, and their scale may also mean they can afford to sell produce at lower prices.

Though each new cash crop is unique, the fruits and nuts being promoted now have many similarities to kiwis. They all require large amounts of land, new cultivation techniques, and processing facilities. Like kiwis, they seem to advantage well-connected landowners with large quantities of land who can learn techniques quickly and start high-quality commercial operations. If the kiwi industry indeed becomes a domain of haves and have-nots, these other crops might follow suit. “Fruit and nut crops are not suitable for the smallholder farmers,” says the normally optimistic Pandey. “They are for the farmers with land.” If he is right, it will mean a continued decline in Nepal’s rural mid-hill villages.

Psychological tools developed with Aboriginal people can also support Australian farmers whose land is suffering the effects of climate change.

Despite the proliferation of large supermarkets, local vegetable markets are thriving.

A future in farming