This week on Writing Journeys, Kunsaang narrates growing up in the mountains of Humla, studying from books that did not represent her, and writing to remember. 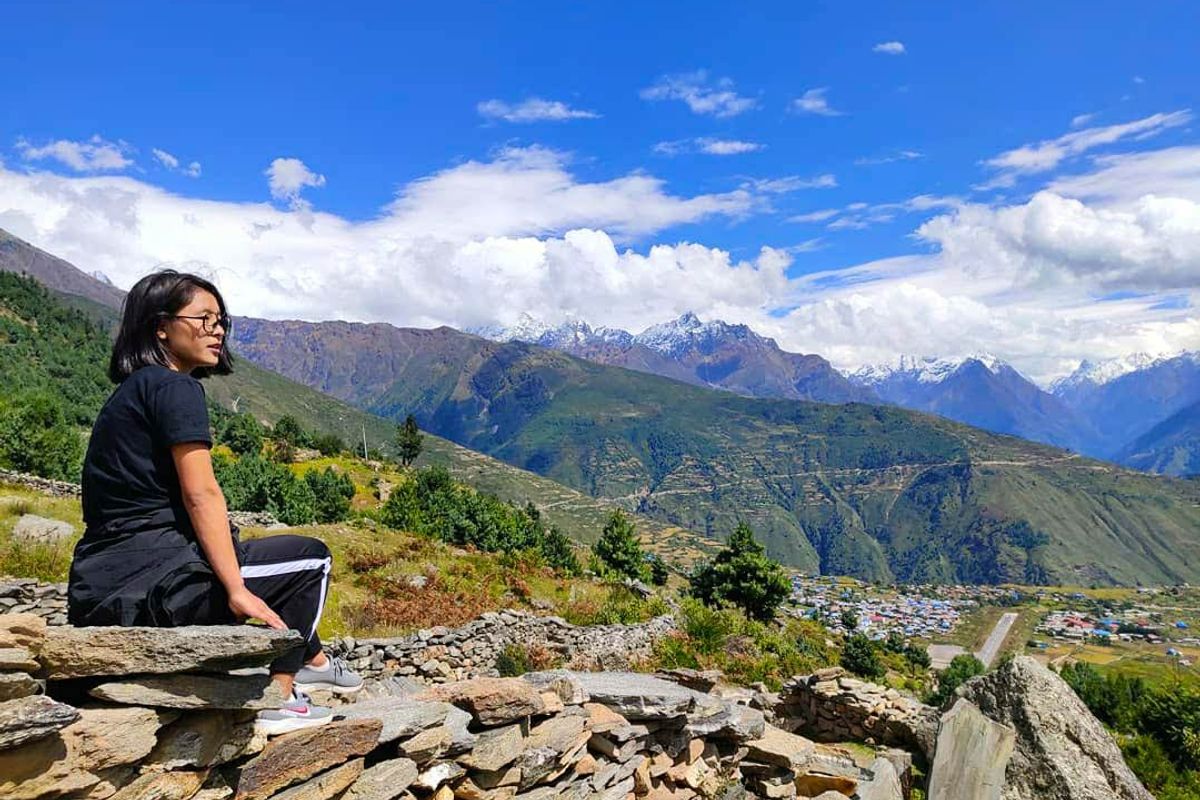 Storytelling has long been a strong tradition in Nepal. During the Rana period, schools were forbidden, and roads were rare, but nobody could stop storytelling. This priceless tradition has built the foundation upon which many Nepali writers and researchers stand today.

Several of our Writing Journey writers have shared with us memories of their storytelling grandmothers and grandfathers. I too fondly remember my own grandmother’s colorful language and adventure-filled stories.

This week Kunsaang writes of her Api and her Api’s gift for storytelling. “My Api was very good at telling stories. She primarily told stories about famines, mountain cliffs, and the joys and sorrows of snowfall,” Kunsaang tells us. These were stories of snow and mountains but so much more. “Api didn’t just tell us stories, she told us our history.”

In this Writing Journey, Kunsaang tells her own story as well, of being a girl in the mountains who liked to study and read and who wanted other options in life besides early marriage.

She also writes of Nepal and the narrow and rigid ideas some people have of what a Nepali is. “The people I met would say the same things – the Nepali you speak isn’t right, you don’t look like a Nepali,” she writes.

Just like the mountains from which she comes, Kunsaang’s writing is sparse, beautiful, and powerful.

Writing Journeys appears every Wednesday on The Record. For past editions of the series, click here.

It was when I was in second or third grade. That was the first time I had a notebook, books, and a pen to take to school to study. Before that, all I had was a chyaanlaak (a writing board) made out of the bark of a walnut tree, along with oil and a little bit of ash.

To buy notebooks and pens, we had to walk six-seven hours from Khagaal, my village, to Simkot, the district headquarters. We didn’t always have the ability to purchase pens and paper nor did we travel back and forth frequently to Simkot. Around 2058 BS, when I started going to school, a new school building was built in my village. Before that, we sat and studied on the grounds of the health post. We moved from studying under the blue sky to studying under a blue roof.

The new building had six rooms, of which five were classrooms. One was an office. The school, with stone walls plastered with mud, looked very elegant. It looked like a child in new clothes. But even though we had a new building, we still sat on the grounds for classes. When inside, we still had to occasionally go outside to rub mud on our chyaanlaaks. On the grounds of the school with the blue metal roof, we sat below the blue sky, dabbing a little oil on the chyaanlaak with a piece of wool, smearing a little mud or ash on the surface, and writing with a twig. This was how I learned to read and write.

I was raised in Humla district’s northernmost village – Khagaal. In the heart of Karnali, the village sits surrounded on all sides by snow-capped mountains. In the middle of the mountains is a dense settlement, with stone houses with mud and birch roofs. It looks as if the finger-like mountains are holding the village in their palm.

In that pretty village, even today, people continue to say, “Why send a daughter who is just going to get married and go to someone else’s house to school?” It is a tradition in our village to get married at a young age. Because of that, most abandon their studies in the fourth or fifth grade. Many girls are also forced to abandon their studies since there isn’t any school in the village that teaches beyond the fifth grade. If we wanted to study further, we had to walk two hours each way in the morning and evening to go to a distant village, or we’d have to go to Simkot itself.  That was especially difficult for girls.

By the time I was in fifth class, many of my friends had already left their studies. When I was in fourth class, someone had already come to ask for my hand in marriage. For me, each day after that was full of fear. I worried that I would now be married off. Even if I didn’t get married, the fear of marriage never left me.

I was happy the first time I got to carry a pen and paper to school. But as I turned the pages of the books, my happiness diminished. The houses, people, and pictures in the book didn’t look like us. Slowly, as I was able to read the stories in the books and understand the language a little, my books did not feel mine anymore. Neither the stories nor the pictures were ours.

As I encountered such stories all the way up to ninth and tenth grade, I thought that all school books were the same. I never got the chance to read books from outside of school. At that time, we couldn’t buy any books in Humla. In 2071 BS, I came to Hyombu  (Kathmandu) for my higher secondary studies. It was only in Hyombu that I was able to read books from outside of the curriculum. I read books like Maxim Gorky’s Mother, Simone de Beauvoir’'s The Second Sex, Govinda Bartaman’s Sohra Sanjh, Parijat’s Anido Pahad, Mahasweta Devi’s 1084 Ki Ma, Khagendra Sangraula’s Pratham Guru, Dor Bahadur Bista’s Sotala, and Bijaya Malla’s Anuradha.

“Are there Tamangs in Humla? Are the people there Nepalis? You don’t look like a Nepali.”

It always felt bad to encounter such questions. I’d think that maybe if someone had written about us, I wouldn’t have to face such questions. But how? And who? I realized the necessity of such writings, but I didn’t dare attempt something no one had done before. Bhot Lamas write little and women especially do not write at all. I could speak my mother tongue but I couldn’t write in it, and my Khas Nepali wasn’t too good either.

Even though I couldn’t gather the courage to write, I continued to read. In 2073 BS, I finished grade 12 and began to write some ghazals. I didn’t have the courage to write longer pieces. Even while writing those ghazals, the people I met would say the same things – the Nepali you speak isn’t right, you don’t look like a Nepali. Ghazals apparently have their own rules, none of which I knew. After that, I just stopped writing ghazals.

I was still unable to write the stories that I thought were necessary. But one evening in 2075 BS, I was motivated to write something after reading Govinda Bartaman’s Hariyo Cycle. I recalled my village and began to write. The first story I wrote was about a young boy who sold firewood to make a living. When many people liked that story, I began to think that maybe I could write. I found the encouragement, inspiration, and the courage I needed. My self-esteem grew too. After that, I wrote about polygamy, women who had fought patriarchy, a story of snow, development and changing societies, and life in the mountains.

I think that travel is just as necessary as education to understand society. In each new place, new people and new things offer a chance to learn. Even though I couldn’t travel as much as I wanted, reading travelogs made me feel like I had actually visited those places. It takes me a long time to write an essay. Even after writing, I sit again and again to re-write. Writing is a learning journey for me. On this journey, I have been influenced by many authors. But above all, I’ve been affected by the stories of [Saadat Hasan] Manto.

When I was in the village, my Api (grandmother) would tell me stories. Earlier, there was a custom to go listen to tamey (stories). Children would crowd the homes of grandfathers and grandmothers who could tell good stories to hear their tamey. My Api was very good at telling stories. She primarily told stories about famines, mountain cliffs, and the joys and sorrows of snowfall. She would weave stories out of her own experiences. We children would gather around the hearth and listen to her tamey.

Api would tell us stories while cutting wicks out of tako (string). At that time, our village didn’t have electricity. For light, we lit a jharo made out of pine branches. In the dim light of the jharo, we could see the color of Api’s face change with the rise and fall of the tamey.

Today in the village, there’s no longer the custom of going to listen to Api’s tamey. I believe that our history is connected to the tamey. Api didn’t just tell us stories, she told us our history. To lose the tameys of the Bhot Lama’s language is not just to lose stories but to lose an entire history. No one has written records of our lifestyles, struggles, customs, culture, or the many generations of Bhot Lamas who’ve lived here. Our identity is linked to the tamey. We can learn valuable lessons from them.

I tried to write down Api’s stories. I now feel that I need to write, even if it is just to prevent her stories from getting lost.

Tom Robertson  Tom Robertson, PhD, is an environmental historian who writes about Kathmandu and Nepali history. His Nepali-language video series on writing, 'Mitho Lekhai', is available on Youtube. His most recent article, 'No smoke without fire in Kathmandu’, appeared on March 5 in Nepali Times.

Except for a few, most Nepali authors are compelled to pursue writing on the side while they work other jobs to make ends meet. But why is it so difficult to earn a living through writing?

Every fibre of his being

Covid-19 forced Jaquir Mansuri to cancel his daughter’s wedding and delay his plans for retirement but the pandemic is not over yet and Mansuri has gone back to work.

This week on Writing Journeys, Kunsaang narrates growing up in the mountains of Humla, studying from books that did not represent her, and writing to remember.

In another edition of Writing Journeys, advocate Dev Datta Joshi reflects on the difficulties of schooling as a visually impaired person and how he came to see writing as a transformative tool.

Indu Tharu: Whatever I want to write about has to touch my soul

Activist and researcher Indu Tharu recalls what it was like growing up and studying during the civil war and how that experience formed her writing consciousness.