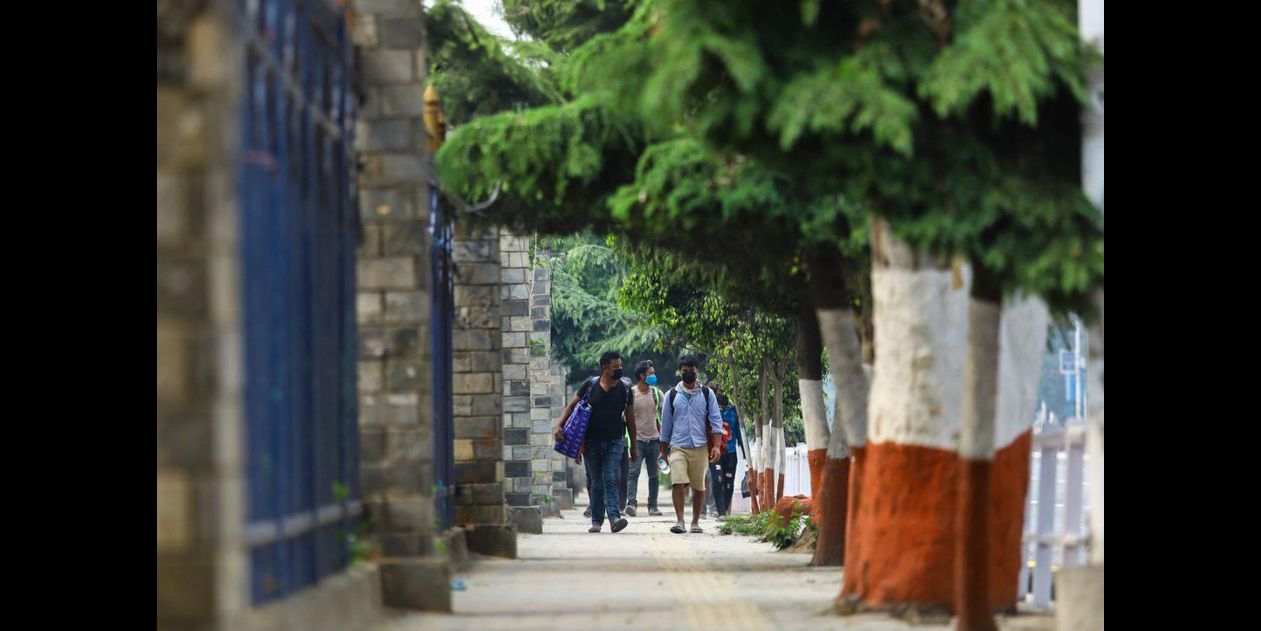 After over 120 days of lockdown and four weeks of prohibitory orders, Nepal will ease restrictions on mobility and open offices, industries, and markets beginning Thursday. The government, however, has decided to keep schools, universities, cinema halls, and party venues closed while banning physical seminars, conferences, and public rallies.

“Offices will be open from tomorrow, and people will be able to take public buses to work,” said Dr Jageswhor Gautam, spokesperson at the Ministry of Health and Population (MoHP) during the daily press briefing. “While resuming our jobs, we should also protect ourselves and our families from the virus. Please wear a mask without fail when you leave the house, wash your hands when entering the office, keep the desk clean, and disinfect common toilets.”

Dr Gautam also reminded the public that the decision to open up all sectors was not taken prioritising the containment of the virus. Instead, it has been taken to reduce the impact of the protracted lockdown on the economic and social life of the entire Nepali populace. In fact, the number of infections in densely populated places such as Kathmandu and other cities is currently on the rise.

The reopening of the economy coincides with a record number of daily Covid-19 cases in Nepal. The country recorded 1,539 cases in the past 24 hours, taking the national tally to 58,327. With eight deaths on Wednesday, the death toll has reached 379.

Kathmandu Valley, home to five million people, recorded 737 Covid-19 cases, comprising almost half of the newly detected infections. Kathmandu District recorded 652 cases on Wednesday, a jump from 555 the day before. Lalitpur and Bhaktapur districts, meanwhile, have consistently recorded less than 100 daily cases since the beginning of the outbreak. Lalitpur recorded 60 and Bhaktapur 25 cases on Wednesday.

Today’s new cases were based on merely 10,494 PCR tests, and made up 14 percent of the total tests. Kathmandu District has recorded a much higher test to infection ratio, with almost 30 percent of all tests showing positive results. Through all this, the government has been scaling down PCR tests on a daily basis. Just a few weeks ago, the government was conducting around 13,000 tests daily.

Experts and health professionals had been requesting the government to ramp up testing to prevent the virus from spreading at the community level, but their pleas have fallen to deaf ears. Whereas earlier, around 98 percent of cases were associated with people with travel histories, now people without travel histories are also getting infected. The number of infected females has also increased significantly from five to 30 percent. While the total number of Covid-19 cases after the first lockdown had reached 17,000, it has increased threefold in the past one month during the second phase of the lockdown.

The government has also shown an intention of deliberately reducing Covid related death count. On Wednesday, Dr Gautam instructed health workers not to test dead persons even if a person is suspected of being infected. “Don’t extract samples from the deceased for testing,” he said.

This decision has come in tandem with other decisions revealed a few days earlier, including the decision to foot medical bills only for the ‘poor’ without clearly stating what this category includes, and conducting PCR tests only on those people showing symptoms. Additionally, frontline health workers have been asked to get themselves tested on their own finances. Earlier, frontline workers were getting tested for free.

Despite prohibitory orders, cases in the capital have soared in the past four weeks. Government officials themselves admit that the lockdown did not yield expected results. “I think the lockdown did not help contain the virus. Such a thing is not possible unless the public changes their behaviour. Currently, the public has undermined the instructions to wear masks, maintain distance and wash hands,” said Krishna Bahadur Mijar, chief of the health office in Lalitpur.

The district administration offices in association with local authorities have identified quarantine and isolation centres in the cities, but their full operation has not begun yet. The health offices of the districts have been tracing contacts of the infected, which, according to Mijar, has been very difficult due to non-cooperation by the public. People decline to speak to officials, some have given the wrong phone number and some have not even answered calls. Meanwhile, they might have transmitted the virus to many others.

With a majority of sectors opening up from Thursday, there is a high chance that Covid will spread even more rapidly in the coming days. “They should have opened up gradually. And the government is reducing testing while refusing to test the dead, both of which could have a disastrous consequence. None of these things indicate anything positive for the future,” said epidemiologist Dr Lhamo Sherpa.

Local authorities in Kathmandu Valley have issued a to-do list for the public to abide by while traveling and going to work. But many people have already started going out without wearing masks and there is no mechanism to ensure that everyone wears a mask or follows safety protocols.

The deadly combination of rains, roads, and landslides

Lessons we don’t learn from history

Determined to crush Maoist rebels instead of seeking a political solution, Oli is repeating the same mistakes Deuba made in the 90s which resulted in a decade-long people’s war

Vaccines for everyone, except the elderly

The elderly continue to wait their turn as journalists, diplomats, development workers, government officials, and bankers get the jab.