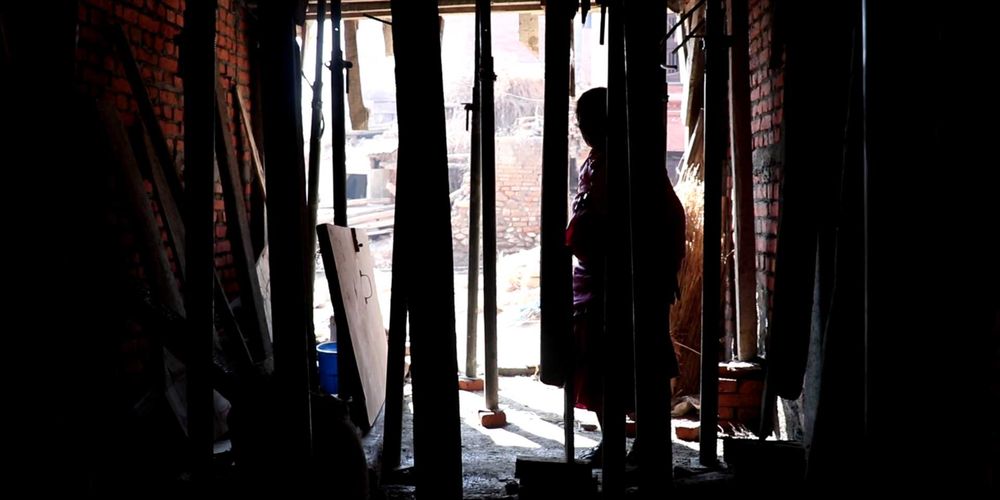 “Help from the government?” asks Anil Shakya, laughing. “Rather, we ought to collect a bit of money to give to them!” A giggle ripples across the small group of workers assembled in the courtyard of the Rato Machhindranath Temple. The workers are chipping away to make wooden friezes. There is resentment mixed in with the sarcasm. Two years after the earthquake, Bungamati has seen little in terms of aid from the government. On January 16, 2016, the then premiere KP Oli was present in this courtyard to inaugurate the ‘Bungamati Rebuilding Plan’. Today, on a shrine beside the under-construction temple, there is a banner that explains the reconstruction of the Bungamati temple is now being done by the Sri Lankan government.

Featuring steele dating from 605 AD, Bungamati is historic. The main highlight of Bungamati was the temple of Rato Machhindranath, where the idol of Machhindranath, or Bungadya, is placed for six months each year. Bungamati was also one of the worst-hit locations in the valley during the earthquake. A Newa village with most of its construction being traditional-style homes, Bungamati saw over 800 of its houses collapse during the quake.

[Above: Satellite imagery of Bungamati before and after the earthquake. Drag the slider to compare. Towards the center is the temple square. Lighter rectangles in the 2015 image are corrugated roofing on earthquake victims' shelters.]

The National Reconstruction Authority was established on December 25, 2015 to manage earthquake reconstruction in Nepal, and it has been distributing rebuilding aid in tranches. According to NRA Lalitpur Coordination Committee Head Goma Devi Dhakal Paudel, there are two types of beneficiaries, those whose homes are marked fully damaged and must rebuild from the ground up, and those whose homes are marked partially damaged. Which category one falls in is decided with the input of government surveyors. Those rebuilding receive NPR 300,000, while those repairing, known as retrofitting beneficiaries, receive NPR 100,000. To claim benefits, one’s name has to be on NRA’s lists. “For either type of beneficiary, once their name is on the list, they receive NPR 50,000. Those repairing need to have their completed work verified by government authorized engineers, after which they receive their remaining NPR 50,000. For those rebuilding, to receive their second tranche of NPR 150,000, they must have completed the foundation of their new house, and this must also be verified by a government engineer. When they have completed building their house, they receive the final tranche of NPR 100,000,” explained Paudel.

The government set up this process in order to deter those who may try to take the relief aid without any need for it, or those who take the money but do not put it towards rebuilding and repairing. Unfortunately, the current process still has its set of issues. The amount offered is nowhere near what is needed to build a home in Nepal. Potential recipients have also complained about bureaucratic hurdles.

Asamaya Tuladhar’s home was originally made of traditional mud brick, but it had a newer side made of cement. When the earthquake struck, the top portion of the mud brick side fell down. The newer cement and brick side withstood the earthquake, but out of fear of another possible quake, they tore down the top storey of the newer portion of their house too. Today, they are rebuilding the old portion of their house. They’re raising the first storey, while behind them is the gaping cross section of the cement side, giving passers-by a glimpse inside their home. 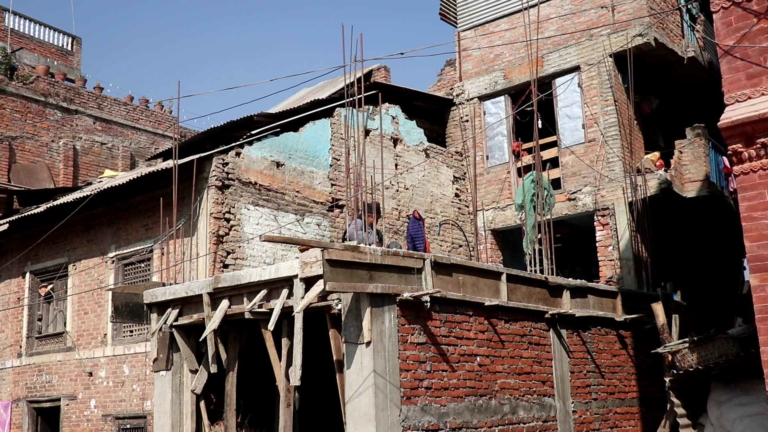 When asked what help they have received from the government, Asamaya Tuladhar says they have received nothing. “They asked about papers. I went to their office to do the paperwork. But even then our name did not come out on the list. When we asked why, they didn’t explain properly. Then they asked us to put our names in a second time, but once again we got left out. If the government doesn’t care about us, where are we supposed to turn to?”

Since they don’t have enough money of their own, they have taken out a loan to build the house. They plan to build three storeys, and so far have spent NPR 120,000.

Another person who has not been able to avail of government relief is Madan Shakya, tailor, and priest of the Karunamaya temple. “The state has benefited a lot from Bungamati because of the tourists who come here. We should rebuild in a way that keeps the old appearance. I wish the municipality would help us, but so far we’ve barely received any assistance from them. Many of the homes here had an old side and a new side. Where the old side was destroyed and some of the new side remained, the government has marked those as “alternative homes” and withheld aid from affected families. Because of this, people are stuck in the middle about what to do. Alamali yanachwoun du (people are confused)”.

Madan Shakya’s home also has an old wing and a new wing. The old wing was there in the earthquake of 1934, when it had been damaged but later repaired. However, the earthquake of 2015 took its toll, and a wide fracture now traverses the house from top to bottom. All of his extended family now live solely in the new wing. “People from the ward office came and took photos of my home, collected details. They had marked it as fully damaged, but then the next time round the list was released, they removed my name. I don’t know why. I have applied again but so far, nothing.”

A few residents have been able to collect some funds from the government. However, they too complain that the aid is insufficient, and many have resorted to selling land to have enough money to rebuild.

Siddhidas Maharjan is a local resident who started building his new house ten months ago. The back side of his house was destroyed completely in the earthquake, so he decided to remove what remained and build again. He says his family received the initial NPR 50,000, and that authorities there had said they would give out money again, but he never saw it. “I built this home with my own money”, he says. “Setting up the foundation cost NPR 700,000. Building this house has cost me NPR 4,500,000. I sold part of my field to get money for this. I had bought some brick earlier for another purpose, but after the earthquake I put that towards the new house. I haven’t even calculated that.”

Yamuna Maharjan is another resident who is rebuilding. Her old house in the village center collapsed during the earthquake, so she is now constructing a house in another location in Bungamati where she owned land. Maharjan states that she received NPR 50,000 once, and that she also received auxiliary relief in installments of NPR 25,000 and NPR 15,000. She stated that she has spent NPR 1,300,000- 1,400,000 so far. “The government money was only enough for me to buy some cement.” 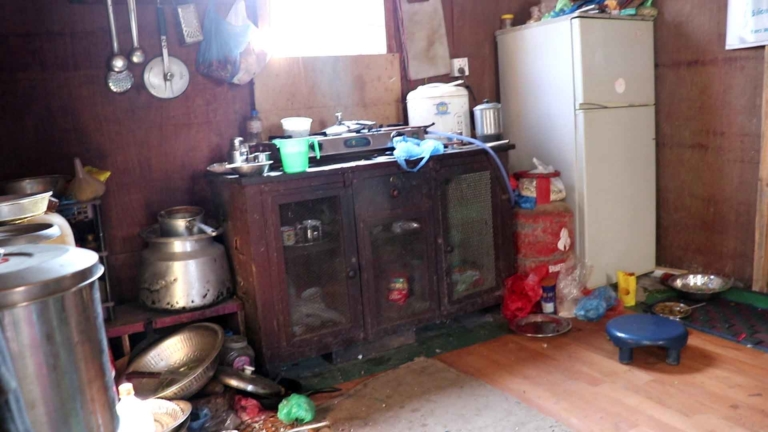 As post-earthquake rebuilding moves into its third year, the NRS has identified 767705 people as being eligible for housing grants. Agreements were signed with 90 percent of those identified. Among these 88 percent received their first tranche, but only 25 percent and 6 percent have received their second and third tranche. In the NRA’s review report they have expressed commitments to provide building materials at low cost to the victims. Outgoing Prime Minister Sher Bahadur Deuba had also announced additional NPR 100,000 grant for quake victims. However, this is a burden the NRA claims it cannot bear this fiscal year given the amount they have been assigned in the budget.

Madan Shakya explains that while many residents own land, subsistence farming is what they are limited to. The few commercial tented farms visible near the river basin do not belong to the locals, according to Shakya. “The majority of youth here are engaged in woodcarving and crafts, because of which agriculture is neglected. People haven’t been able to farm on a commercial profit-basis. People are dependent on tourism.” The Fast Track project and a high tension power line are also slated to pass across the fields. “They’re not offering sufficient compensation to the locals,” says Shakya. In this economic vulnerability, Bungamati earthquake survivors are hard pressed to come up with funds to rebuild.

When asked if they have done anything to apply for aid again, Asamaya says no. “If they come here to hand us the money we’ll take it. Otherwise we’ve given up. We have no one here to handle such matters either.” Her neighbor, Kalpana Tuladhar, is almost done with rebuilding her home. She states that she only ever received the first tranche. “If you wait for the government, you’ll wait forever.”

We welcome your comments at [email protected]

Lessons from 3 crises in 5 years

Unless Nepal comprehensively overhauls its disaster response mechanisms, we’ll continue to see the nation reeling with every crisis