Oli sacrifices the constitution to save his skin

Oli sacrifices the constitution to save his skin

The PM creates chaos, and invites ridicule for dissolving parliament at a time when he should be focusing on the Covid-19 crisis 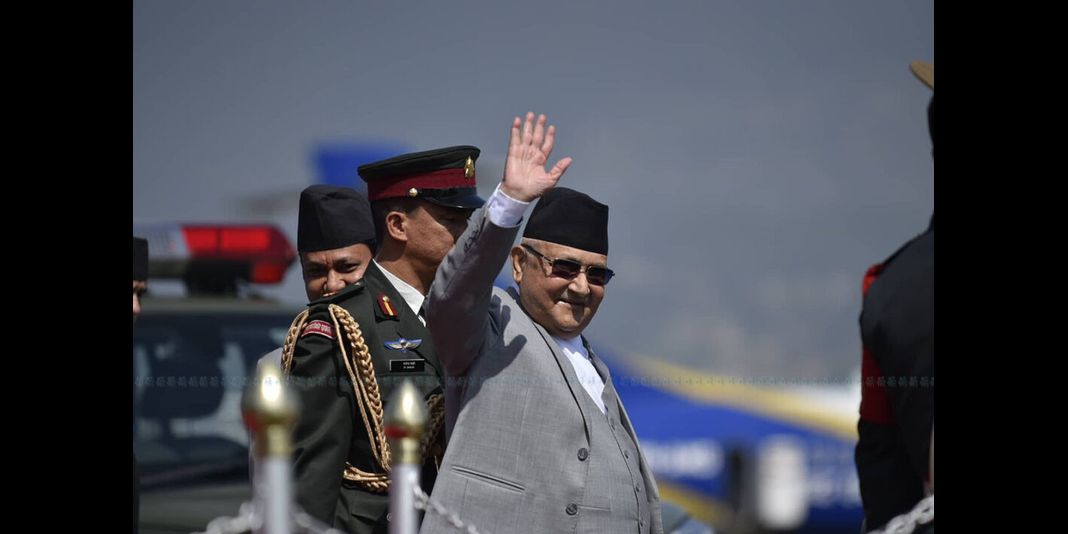 President Bidya Devi Bhandari on Sunday dissolved the parliament and called for midterm general elections in an apparent constitutional coup that has sent shockwaves throughout the nation.

The general elections for the federal parliament is slated to be held in phases on April 30 and May 10, the Office of the President said in a statement.

President Bhandari was acting on the recommendation of Prime Minister KP Sharma Oli, who earlier in the day had pushed through, during an emergency cabinet meeting, the proposal to dissolve the House of Representatives, the lower house of Nepal’s bicameral parliament.

The statement by the president’s office states that the decision was taken as per ‘Article 76 (1) and (7) and Article 85 of the constitution and other parliamentary norms and practices’. Article 76 mentions that the prime minister can recommend the dissolution of the House of Representatives if he fails to obtain a vote of confidence, while Article 85 pertains to the term of the House of Representatives.

Constitutional experts have said that regardless of the provisions mentioned for dissolving the House of Representatives, Oli has no such prerogative to dissolve parliament at a time when there are lots of other options to choose from, and even if he fails to command a majority in parliament.

What prompted such a reckless move remains unclear, but Oli’s aides say that the prime minister was forced to use what they call his constitutional prerogative to avoid a possible disgraceful exit. The rival faction--led by Pushpa Kamal Dahal and Madhav Kumar Nepal--within the Nepal Communist Party (NCP), was all set to table a vote of no confidence against PM Oli on Sunday itself. Sensing a disaster brewing, Oli decided to dissolve the parliament.

The vote of no-confidence motion, a draft of which was seen by The Record, shows the rival faction has accused Oli of failing to work in accordance with the promises he made at the polls and for failing to curb corruption, and it has also proposed Dahal as the new prime minister. Of the total of 174 ruling-party lawmakers in the lower house, 90 members added their signatures in the motion to oust Oli.

Even as Oli’s aides have defended his move, the decision to dissolve the parliament two years before the expiry of its full term has rocked Nepal, whose citizens had voted the NCP into power in the hopes that it would ensure  political stability and accelerate economic growth.

The dissolution of parliament has invited strong criticism from across the Nepali polity. Members of civil society and opposition parties and several leaders from Oli’s own party have condemned the move, describing it as a major breach of the new constitution, which was promulgated in 2015.  Many are of the view that a prime minister such as Oli, who commands the largest majority in the country’s recent parliamentary history, has no right to dissolve the House.

“The dissolution is a coup of the Constitution,” Bhimarjun Acharya, a constitutional expert, said in a tweet.

Whether the move lies within Oli’s prerogative depends on how the Supreme Court interprets the constitution in the coming days, but there are already strong signs that Oli’s historic gamble could cost him dearly, at least politically.

By late afternoon, at least three writ petitions demanding the withdrawal of the dissolution of parliament had already been filed at the apex court. Seven ministers in his cabinet have already resigned, while others are likely to follow suit, with the opposition to Oli’s move rapidly gaining steam.

Soon after the decision was taken, thousands of people took to the streets--in Kathmandu and other cities--to protest the move. The protesters burned effigies of the prime minister and president and demanded that their decision be rolled back.

Oli’s recent move represents yet another desperate attempt to have things his way. He has already deployed all possible options to silence his rivals in the NCP. Even as he was cornered in his party, he revised the Constitutional Council Act by introducing an ordinance recently, and he has recommended 45 commissioners to 11 constitutional bodies, including the Commission for Investigation of Abuse of Authority (CIAA). Oli’s trusted bureaucrat Prem Kumar Rai has been named as chief of the anti-graft body, at which the multi-million rupee cantonment corruption case filed against Dahal has been put on hold for years. Furthermore, several grand corruption cases involving Oli’s ministers--including a major one related to the Covid-19 procurement scam--have been lying also unresolved for months.

Read also: How govt officials are looting the Covid coffers

Meanwhile, a meeting of the majority of members of in his party’s Secretariat--held at the party’s headquarters in Dhumbarahi late in the evening--has condemned the dissolution of parliament and decided to call a meeting of the party's lower committee to initiate disciplinary action against Oli for what it called the prime minister’s “unconstitutional”, “undemocratic”, and “authoritarian” decision, which goes against the mandate entrusted to the PM’s party.

Sunday will certainly go down in history as one of the darkest days in Nepal’s political history, while Oli and President Bhandari, Oli’s partner in political mischiefs, will go down as leaders who destroyed Nepal’s nascent democracy.

The Nepali people have seldom trusted any leader as blindly as they trusted Oli when he led the ruling NCP to victory in three tiers of elections in 2016 and 2017. With Sunday’s decision, Oli has broken that trust--and that could not only ruin his political standing, but also plunge the country into a new era of political uncertainty.

Although Oli has announced Nepal will hold general elections next spring, very few are convinced that it will happen due to the Covid-19 crisis and other practical difficulties that will surely impact the logistics around holding elections. And it’s still unclear whether the NCP will remain intact when it comes time to contest the upcoming elections.

In the face of blowback, Oli, perhaps to show his resolve, summoned election commissioners to his residence, where he instructed poll commissioners to begin preparations for the scheduled elections. Oli also summoned the chiefs of all security agencies--the Nepal Police, the Armed Police Force, and the Nepal Army--and asked them to thwart any type of anti-government protest. Likewise, he called a meeting of the Security Council to assess the security risks that could emerge owing to the resulting political turmoil in the country.

Oli’s recent move also shows where his priorities lie--instead of focusing on the Covid-19 crisis, he remains hell bent on doing whatever it takes to cling to power, even if it means kowtowing to the Chinese government. His government has scaled down PCR testing and asked the public to foot the medical bills themselves for Covid-related procedures and treatment. Currently, the average number of daily PCR tests has come down to 4,000, while quarantining, isolating, and contact tracing of the infected are seldom done. Resources that could be funneled toward treating Covid-infected Nepalis will now be diverted to meet the costs of holding elections. Nepal had spent an estimated NRs 62 billion to conduct provincial and federal elections in 2017, according to the Election Observation Committee Nepal.

But whether out of hubris or because he knows no other prominent leader can take him head on, Oli and his team appear confident that the public will rally behind his recent spate of questionable decisions. “It’s quite usual in a democracy to seek a fresh mandate when the people’s erstwhile mandate becomes irrelevant,” said Shankar Pokhrel, a leader close to Oli, defending the decision to dissolve the parliament. “The elections will ensure democracy and will further strengthen it. Furthermore, street protests will only benefit the reactionary, rightist forces. Let’s be serious and act responsibly.”

But the mood on the ground suggests otherwise, with many concluding that Oli has placed his political ambitions above his duty to obey the constitution. Opposition parties have warned that they will challenge his decision both through the court and on the streets.

Already, the main opposition, Nepali Congress, Janata Samajwadi Party, and a faction within the ruling NCP have agreed to launch joint protests against the move.

Oli is also likely to lose the trust of the civil society, including that of leaders who have stood by him during his recent episodes in adventurism. “This is an unconstitutional move by the PM. There is no provision assigning prerogative to the PM to dissolve the House, although there were such provisions in the old constitution, which we have already scrapped,” said constitution expert Bipin Adhikari, a supporter of Oli’s moves in the past, in an interview with Kantipur TV.

Corrections 21 December 2010: This article was revised to reflect the actual cost of the federal elections. An earlier of the article used "million" instead of "billion." The correct cost is an estimated NRs 62 billion.

Nepal’s fall on the Corruption Perception Index is no surprise, given the scale of corruption in the Oli government this past year.

Why the NC has become toothless

How the left alliance won

Shortage of protective gears, supplies and ventilators in Nepal likely to cripple medical interventions against Covid19