The Abbot of Tengboche Monastery, Ngawang Tenzin Zangbu, who passed away on Oct 10, was renowned for his commitment to the sacred valley of Khumbu and the Sherpa people 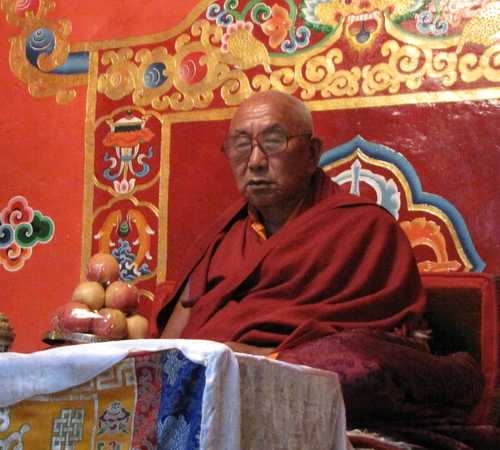 The allure of Everest, the world’s highest (8,848 m) and most famous mountain, moves people of every nationality to visit the once remote Khumbu Valley, the homeland of the Sherpa people on the south side of Everest.

On a ridge in the heart of the valley, Tengboche Monastery holds a special place in the hearts and minds of both Sherpas and world visitors. Sherpas are an ethnic Buddhist people who settled valleys in the Himalaya about 500 years ago but have in the past century earned an extraordinary reputation on mountaineering expeditions.

Over the past 60 years, thousands of trekkers and climbers have paid their respects to the longtime Abbot of Tengboche Monastery, Ngawang Tenzin Zangbu. His title, Tengboche Rinpoche, refers to his status as a ‘precious one’ and revered reincarnation of the monastery’s founder. The Sherpa people venerated Rinpoche as a strong unifying force and spiritual protector of the environment and culture of the Khumbu Valley.

The monastery was inaugurated in 1919. A massive earthquake destroyed its main prayer hall (gompa) in 1934 and the founder, Lama Gulu, died that night. The monks and Sherpa community rebuilt the gompa. Six years later, a child from Namche Bazaar was recognized as the reincarnation of Lama Gulu. That child grew up to be Tengboche Rinpoche.

Rinpoche was renowned as a spiritual leader and counselor on matters as varied as Sherpa culture, language, health, the naming of children, education, conservation projects, and building infrastructure. He oversaw the reconstruction of the main gompa after it was destroyed by a fire in 1989. He was active on several projects and committees to help the local people, promote development and conservation, and preserve the Sherpa culture and religion.

While visiting his hometown of Namche, Rinpoche passed away on October 10. He had asked to go there and stay in a relative’s house built on the exact location of his family’s old home. Rinpoche died at the spot where he was born. From 1935 until 2020, Rinpoche’s lifetime spanned notable eras in the modern history of the Himalaya, from when Nepal was closed to foreigners and Tibet was an open country until the present era of commercial expeditions and tourism bringing the world to this once remote valley.

Rinpoche was born in Namche in 1935. Of his family, two sisters and three brothers stayed in Namche while his father went on trading trips taking yaks across the Himalayan passes to Tibet, Sikkim, and other areas of Nepal. In the 1940s, the trading traffic across the passes was such that the yaks wore trenches into the glacial ice.

As a small child, Rinpoche talked about wanting to go home to Tengboche. In that era of trans-Himalayan travel, his mother carried him to Rongbuk Monastery, on the north side of Everest, in Tibet. Here the Abbot of the monastery recognized him as “the true Tengboche reincarnate.” The Tengboche monks took him to the monastery at the age of five, to be raised as the Reincarnate Lama and future Abbot. When he was nine, in 1944, the monks took him to study at monastic schools in Tibet, first near Lhasa then Gyantse and Shigatse.

As a teenager, Rinpoche returned to Tengboche for a few years and met the first foreign travelers, HW Tilman and Charles Houston, who visited the Khumbu Valley in 1950 in search of a southern route to climb Everest. Tilman wrote the first western description of Rinpoche: “Thyangboche is a very small counterpart of Rongbuk monastery on the Tibetan side of the mountain,… Yet, its abbot, a shy, smiling youth, of reputedly great spiritual power, is held in little less reverence (than the Rongbuk abbot)…”

The Sherpa people held Rinpoche in high esteem even when he was a young man. He returned to study in Tibet for five more years until the situation there became difficult as the Chinese army took control. He walked back to Nepal over high passes at night with two of his brothers and a Sherpa nun, all of whom had also been studying in Tibet. Later, Rinpoche continued his studies in India with famed Tibetan lamas who had fled the challenging situation. He achieved the highest levels of learning in Tibetan Buddhist studies, comparable to a doctorate. However, with the changes in Tibet, it was not until 1983 that Rinpoche would again visit Tibet as part of an official Nepali delegation.

In the late 1950s, Rinpoche returned to a Nepal that was opening up to the world after 150 years of seclusion under the Rana regime. On the main trekking route to Mt Everest, trekkers and climbers started visiting Tengboche and seeking an audience with Rinpoche. Climbers would ask for a blessing for the safety of their climb.

Rinpoche’s sense of humour and honesty would usually impress visitors as much as his presence in the maze of the small monks’ homes surrounding the exotic and picturesque gompa of the monastery. The numbers of visitors in the spring and fall seasons grew each year from a dozen to a hundred to even five hundred trekkers daily in recent years.

By the early 1980s, Rinpoche saw the opportunities for livelihoods from tourism but was very concerned about the Sherpas’ dependence on one industry. He also saw the challenges and pressures on the Khumbu Valley’s delicate mountain environment. Rinpoche worried about preserving the rich cultural and religious heritage of the Sherpa people, so he initiated a Sherpa Cultural Center project, about which he wrote: “We built the Center because if young Sherpas see the foreigners taking an interest in their culture, they will keep their pride in their heritage. If we start preserving our Sherpa culture here, the idea will spread to other places. As well, it is very important to help the people and the government develop the country.”

Rinpoche began the Tengboche Development Project to promote much-needed appropriate development schemes related to water and sanitation. He supported the Sagarmatha Pollution Control Project to collect solid waste in the Khumbu Valley. During these years, Rinpoche received four awards from the then king of Nepal, including the highest medal, and was a key figure on a committee and the Himalayan Buddhist Association to advocate for Buddhist mountain people. He received the WWF International award and the World Tourism Fair award from the German government.

In 1988, a mini-hydroelectric power plant was installed at Tengboche, but its residents did not understand the dangers of electricity. Whatever the cause, flames devoured the gompa’s 50-year-old wooden interior on a freezing night in January 1989. Instead of the gompa’s wide, sweeping roof, only broken stone walls and a half-melted tin roofing remained. When asked how he felt about the destruction of the temple, Rinpoche responded, “The gompa is like a person — after death the spirit goes on. The spirit of our monastery will persist.”

Once again, the Khumbu Sherpas were reconstructing the gompa at Tengboche, this time led by Tengboche Rinpoche. This time the interest in the reconstruction was international, as individuals and organizations around the world wanted to contribute to the project. As Rinpoche commented, “This was a powerful place to practice meditation. Tengboche has brought the Sherpa community together three times (1919, 1934, 1990) now to build and rebuild it. What happens now in our hearts and minds is what is most important.”

Rinpoche lived very simply. He spent much of his time at Tengboche Monastery, traveling out to Namche or Khumjung villages to preside over prayers, such as  Nyungnye, to the deity of compassion, or Dumchi, the main village ritual. He would officiate at the monastery’s Mani Rimdu festival in the autumn, with its famed masked dances, before traveling to Kathmandu to escape the bitterly cold Himalayan winters. In the city, he did not have his own monastery, so he stayed with students or relatives. His brief trips abroad included Japan and the US. Rinpoche’s focus remained on the sacred valley in the mountains and its Sherpa inhabitants.

In 2011, Rinpoche underwent treatment for stomach cancer and gradually recovered. He did extensive meditation retreats in his later years but continued to promote environmental conservation, strengthen Himalayan Buddhism, and mentor his Sherpa community. To make time for retreats, Rinpoche handed over the blessing of expedition climbers to a Tibetan lama in Pangboche, because he felt strongly that he could not conscientiously perform rituals for good fortune on climbing expeditions when the climbers were intentionally risking their precious human lives.

Concerned about the growing climate crisis seen in the retreat of Khumbu’s glaciers, Rinpoche believed strongly in the relationship between care for the environment and Buddhist spirituality. He was passionate about the global spiritual significance of the Khumbu Valley and sacred places of Nepal. To enrich the spiritual power of these sacred places, he engaged in onsite meditation retreats and Buddhist activities. He created and blessed statues of the female protectress deity, Tara, for each community gompa in Khumbu and made blessed vases and ‘longevity pills’ to propagate the spiritual power of sacred places and help people in the mountains.

Rinpoche was one of the only people who knew all about the sacred sites at Lumbini, the birthplace of the Buddha. A major activity of Rinpoche in his last decade was preserving and transmitting sacred teachings to the younger generation of Buddhist teachers, monks, and practitioners. Christina Monson, his long-term student of Buddhism, said: “When Tengboche Rinpoche taught and gave transmissions, he did it perfectly, and old style. He never rushed. He would frequently erupt with pith instructions in the middle of empowerments, sometimes making them last for many hours. He was totally uncompromising in his practice and teaching of Dharma (Buddhism). Few people knew what a great scholar he was and about his extensive and detailed knowledge of Nepal's sacred places.”

Even in his last months, Rinpoche organized and led a major ritual at Tengboche to pray for the victims of the Covid-19 virus and for an end to the pandemic.

The Sherpa people have lost a key figure who inspired them to preserve their cultural, social, and linguistic heritage. The world has lost a spiritual leader exemplifying a global vision while initiating local action.

Frances Klatzel  Frances Klatzel has helped with numerous projects with the Sherpas in the Khumbu, starting with Tengboche Rinpoche on the Sherpa Cultural Centre and his book, “Stories and Customs of the Sherpas”. She also helped create the Namche Gompa Visitor Centre and wrote “Gaiety of Spirit – the Sherpas of Everest.” The monastic community at Tengboche asked her to do this obituary.

The path to war

Nepal prepares for war with the British

The joy of writing

This week, for Writing Journeys, series editor Tom Robertson asked contributors what they enjoy most about writing. Here are their answers.

A regime on the verge of collapse

As the Rana regime nears its downfall, Nepal gets its first constitution

A tenacious and perceptive witness

What is the biggest achievement of my life?

In the final part of this series on his life and times, writer Tim Gurung reflects on a life well-lived and reveals the secret to his success.

Richa Bhattarai: 'A day that I do not write is a day wasted'

Writer and reviewer Richa Bhattarai fondly reflects on the reading and writing habits instilled by her father in this week's Writing Journeys.