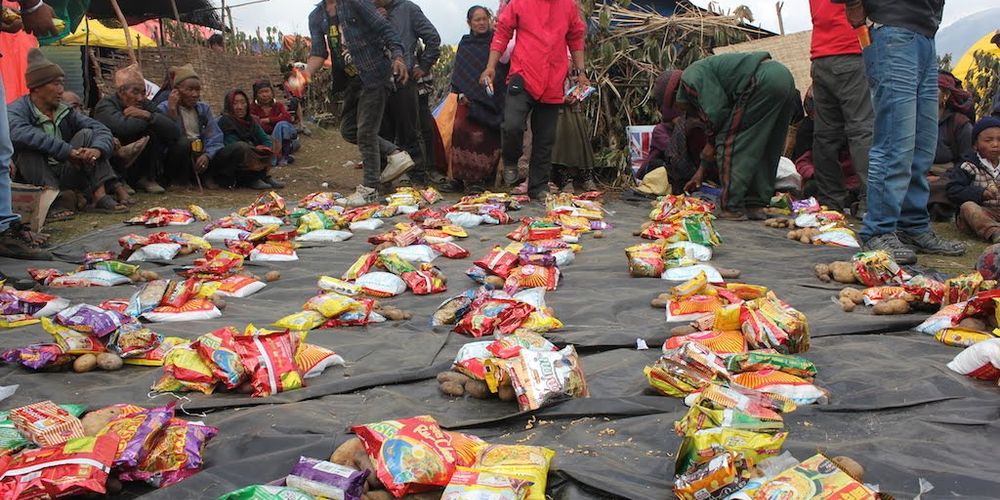 People in the earthquake affected areas of Nepal are highly dependent on home produced food. In the rural hills of the Western and Central Regions, families rely on homegrown food for over 40 percent of their consumption. The dependence is higher—48 percent—in the mountains (Nepal Living Standards Survey 2010/11).

The recent earthquakes have made households in the affected areas more insecure. Along with their homes, many have lost seeds, fertilizers, cattle, and draft animals. Without these inputs, agricultural production and productivity will suffer in the coming season, setting off a vicious cycle of hunger, debt, and poverty. Although current efforts and attention are focused on meeting the most urgent needs, we must act now to prevent another catastrophe. Our failure to address the issue will turn an unpredictable disaster into a predictable and preventable one of malnutrition and mass hunger.

The government has announced a relief package of basic construction materials for temporary shelters. A modest proposal is to add seeds, fertilizers, and basic agricultural equipment to the package and to deliver them before the monsoon. With this effort, agriculture can act as a robust safety net for the coming year. If the state mechanisms are too weak to manage the scale of the operation, the state can solicit the help of volunteer groups engaged in relief efforts. Civil society groups with wide reach can help collect information on needs as well as help distribute the supplies.

There are good reasons to be wary of handouts, especially when the state mechanisms are strained. The high cost of transportation and storage may eat up a large share of the relief budget. Public agencies that distribute goods are a hive of corruption, attracting characters of all stripes. Free distribution of some items, food for example, may crowd out market supply and local production. The handouts might get to those who do not need them, known as “error of inclusion,” or they might not reach those who do, “error of exclusion.”

These problems are important and difficult, and are faced by all social welfare programs. No perfect solution exists, and there is no time to search for one. At times like this, the state must tolerate a few handouts to those who don’t need them, lest it risk complicating relief distribution to the point that it doesn’t reach those who are desperate. A compact exists between the state and its citizens: the citizens agree to abide by a collectively enforced social arrangement in return for the guarantee of basic safety and security. The people have kept their end of the bargain. It is time the state did the same.

Amartya Sen’s argument, counter to the dominant worldview when he first proposed it, is now commonplace. We do not live in a Malthusian world. There is enough food for everyone. Famines in modern times are not caused by a shortage of food: they are caused by entitlement mechanisms, the social systems that determine who gets the food. The Great Bengal Famine of 1943 happened under a booming war economy; the expansion in public expenditure raised food prices that priced out artisans and small traders—net food buyers—from the market.

In the aftermath of Nepal’s twin earthquakes, the people most vulnerable to food insecurity fit just this profile—net food-buying smallholding farmers with meager alternative sources of income. Forty years after Sen first wrote on the subject, it would be a tragedy if we became yet another example that validated his thesis.

Can we stop Nepal from becoming Haiti?

There are many things the government can do to improve relief efforts, but issuing directives on aid activities is not one of them

Langtang rising after the 2015 Gorkha earthquake