For decades, studies have shown that a warming climate is pushing the treeline to shift upwards across the world — including in the Everest region. But what exactly does this phenomenon mean? 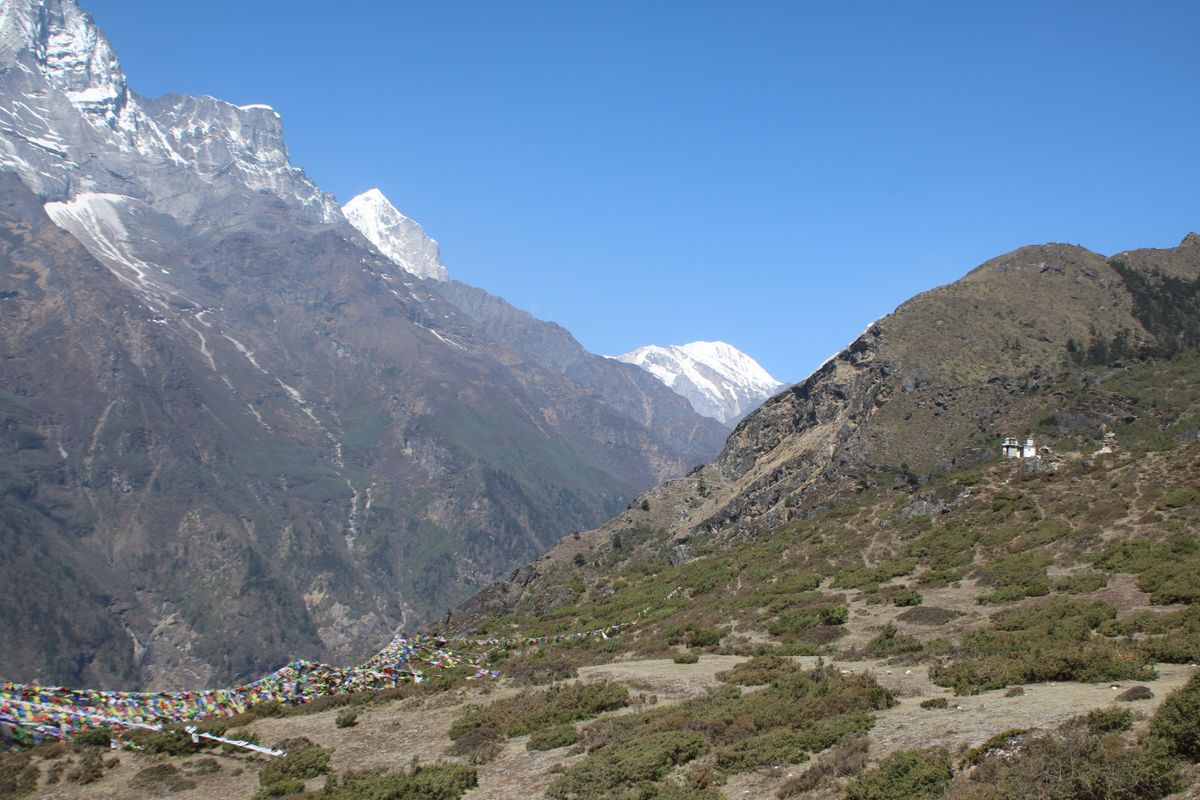 A warmer climate means an expansion of the area in which trees are capable of growing. This allows trees to grow in higher altitudes. (Photos: Marissa Taylor)

It is a clear April afternoon in Khumjung village in the Sagarmatha National Park. The sun is high up on the head and there’s a cool breeze going. Stone houses and fields are tidily lined up on either side of stone pavements and there’s an uninterrupted view of some of the world’s most beautiful mountains — the Lhotse, Ama Dablam and Thamserku. There’s a pleasant quietness to the village.

Khumjung doesn’t necessarily fall on popular trails like the Everest Base Camp trail and the trek to Gokyo Ri and thus doesn’t have many trekkers coming its way. With few trekkers, business for lodge owners is limited here, so the men mostly work as porters and guides and the women stay back to take care of the house and work in the fields.

But there is not much to do in the fields during these months either. The potatoes, which are what grow mostly at this altitude of 3,700 meters above sea level, have already been planted. They’ll be harvested come September. But with rainfall patterns unreliable the harvest will be remains to be seen. For now, the women spend their days cutting grass and collecting leaves in the nearby forests to feed the cattle.

“My granddaughter goes to the forest almost every day and brings the grass to feed our cattle. Without it, we have nothing to feed our cattle,” says Pema Sherpa, 66, a resident of Khumjung, who runs a small souvenir shop.

The forests near the village are some of the last ones in the Everest region. If you move a few hundred meters higher up, there are no trees in sight. This is because above this area — at approximately 4,000 meters above sea level — trees are incapable of growing owing to harsh climatic conditions. This edge of any habitat beyond which trees can’t grow is called a treeline.

But erratic rainfall patterns and a globally warming climate are affecting these crucial zones, causing the treeline in many parts of the world, including the Everest region, to shift upwards.

“The sprouting and growing of trees are directly controlled by temperature and precipitation. A warmer climate means an expansion of the area in which trees are capable of growing, which means trees are slowly growing higher up. There is a direct relation between global warming and this shift in alpine treelines,” said Dinesh Raj Bhuju, an environment researcher who has been studying treelines since 2007.

According to his 2017 study, aimed to assess treeline dynamics and to understand the response of treeline to environmental change, which was conducted in the Everest region, two tree species, the Abies spectabilis (East Himalayan fir) and Betula utilis (Himalayan birch), were found to have moved by about 0.42 m/yr to 0.93 m/yr in the last 200 years.

A more recent 2021 study that reviewed 142 treeline related publications from across the world, including 477 study locations, revealed that at least 66 percent of these treeline sites had shifted in elevational or latitudinal extent.

Numerous researchers have been witnessing this phenomenon for decades now, but what does this treeline shift exactly mean for the mountains and for people? “Alpine treeline shift can have profound effects on ecosystem structure and function,” said Bhuju. This holds true especially for the Himalayan region, as it is more sensitive and vulnerable to climate change because the rate of change is more pronounced here and its vulnerability too more exacerbated by a fragile geology.

“The advancement of the treeline can have negative consequences for adjacent high alpine vegetation,” said Narayan Prasad Gaire, head of the environment science department at Patan Multiple Campus, who has also co-authored several research papers on treelines. “This could eventually lead to species loss and a reduction in diversity. Beyond the treeline, only shrubs and grasses grow. If a tree starts growing in their midst, then the shrubs will have to compete with the trees to survive. They could make it or they could die out,” he added.

Changes owing to treeline shifting have already been witnessed across the world. For instance, forest expansion owing to a warming climate in the Ural Mountains, in Russia, has already reduced the area of alpine grassland and heath by around 10 percent-30 percent. In Glacier National Park, Arizona, in the US, forest encroachment has led to a reduction in diversity: areas where trees have not shifted have four to five times higher diversity than areas with high tree cover.

Treeline shifting can also cause the fragmentation of habitat and can bring significant changes to the carbon sequestration and storage dynamics of these high altitude ecosystems, according to a 2014 research paper.

In addition, as a result of treelines shifting, alpine plant extinctions have been predicted. In New Zealand, substantial loss of species is expected if the global temperature rises more than 3 degrees Celsius, with an associated 500 m rise in treeline. And because the fragmented alpine habitat will be disturbed by treeline advance, 93 percent of alpine habitat islands will likely be lost.

Beyond the environmental repercussions, treeline shift also has socio-economic effects, especially on poor, mountainous people that live in the region, like Pema’s family in Khumjung.

“The high altitude areas are crucial areas for many mountain communities who live off the land, grazing cattle. These areas also produce a lot of medicinal herbs which are used and sold by shepherding communities,” said Gaire.

However, it is important to take into account that the research that is there states that the warming climate is not solely responsible for such changes. “We also have to take into account that the landscape of the area has been in continuous modification because of human beings for centuries. Especially in an area like the Everest, where rapidly increasing tourism activities have increased anthropogenic pressure,” said Gaire. “Furthermore, the land above the treeline are summer grazing lands and the existence of many settlements above the treeline makes it difficult to assess and predict the impacts of climate change in the region separately from the anthropogenic influence.”

And while treeline shift has been studied extensively across the world, little attention has been devoted to gaining an understanding of the impacts treeline shift is likely to have in ecosystems and biodiversity in the Himalaya in Nepal.

There are various reasons as to why that is. One of the major ones is lack of access. “Our country’s topography makes it extremely difficult to conduct studies. Most treeline limits are often inaccessible because of their remoteness. The closest treeline area in Nepal is in Langtang, and even that takes at least three days on foot to reach. In the Everest region, it takes five days at least,” said Bhuju.

The second problem is that there are few scientists and science journalists in Nepal who want to work on environmental issues and write and report about it. “In recent years, more people have been interested in the environment and environmental science but there is a major gap in communicating information to the public and to policy makers,” said Gaire.

The third and the biggest problem is lack of financial assistance and support by the government. “Very rarely does the government fund any kind of scientific research in our country. The research work we have done over the years has mostly been funded through grant assistance from various organizations,” said Bhuju.

But with the earth warming more rapidly, especially in the Himalaya, it is likely we will continue to see forests expand. And studying and understanding the changes that are unfolding is the only way we can adapt to a warmer earth.

“Nature is so intricate, and there is so much we don’t know. Whatever we know till date is just the tip of the iceberg. We can only guess how interactions — among the plant, the soil, the microbes — occur and watch how things will unfold,” said Bhuju.

This story was written as a part of the 2022 edition of the Himalayan Climate Boot Camp, funded by the Spark Grant Initiative of the World Federation of Science Journalists.

Nepal’s controversial move to cash in on wildlife farming

Nepal is pressing ahead with controversial plans to launch commercial farming of wild animals in the country, as major traditional Chinese medicine companies seek to invest.

As Nepal readies to welcome new local leaders, dialogue with residents from Tilottama in Rupandehi reveals creative ways to champion environmental programs at the local level.

The mysterious death of the rhinos

Development and environmental preservation are not antithetical goals