The Making of the Gorkha Empire: Part III – Dominance and Hegemony

The Making of the Gorkha Empire: Part III – Dominance and Hegemony 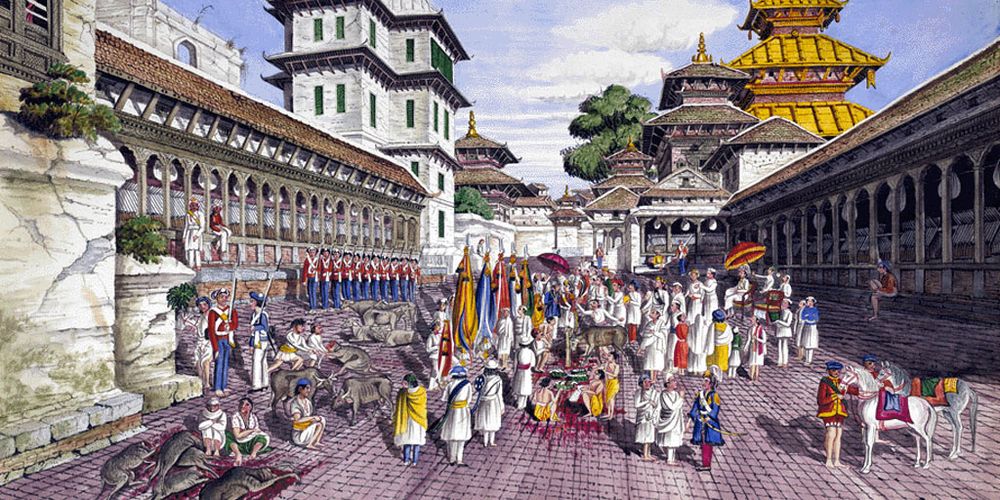 This is the third installment from our series of essays on the Gorkha Empire. Also read the first and second essays of the series.

“In their own companies enlist Khas, Magars, Gurungs, and Thakuris, and only these four jaats. Let these four jaats only serve in the military, and in time of war all will be strong; and the enemy and heaven itself will tremble.”

In 1817, after the terms of the Sugauli Treaty were imposed, mukhtiyar Bhimsen Thapa found himself a lonely man. King Girvan Yuddha had died of smallpox in November the previous year, aged just nineteen, and his infant son Rajendra Bikram had been appointed king, under the regency of Queen Mother Lalita Tripurasundari. In the ensuing palace intrigues, Thapa’s position was precarious: he was losing control of a discontented army that had just lost a war; the king’s mother wanted him removed from the post; and there were concerns over the presence of the British resident in Kathmandu, a consequence of the treaty. Although the Company had returned a portion of the land in the Butwal Terai, along with land that had never been held by the Gorkhalis, Thapa could not be as assured of his position as he was before the war.

The consummate politician that he was, Thapa made a move that will be familiar to many of us in modern Nepal. The Gorkhas had been in touch with the Maratha Empire of India even before the war, seeking a possible alliance against the Company. Now, after the Marathas attacked the Company in November 1817, Thapa saw an opportunity. The two subcontinental empires had remained in touch even after the Sugauli treaty, with sections of the Nepali nobility still encouraged by the possibilities of an alliance. But the ruthless way in which the British dealt with Marathas, with the latter forced to hand over control of their army to the former, sent shivers up the spine of the Kathmandu nobility. Now, with the spectre of the British imposing similar terms on the Gorkhalis, Thapa made his move. In The Silent Cry historian Ludwig Stiller writes:

[Thapa] skilfully urged that [the nobility’s communication with the Marathas] was an open invitation for the British to renew hostilities with Nepal. He used this goad to prod the army to life, without ever once suggesting that they actually attack the British. Again there were military preparations. Troops were alerted to prepare the defenses. The army on the borders was warned to be alive to the dangers of a surprise attack.

Thapa secured his position with this manoeuvre. The bhardars were satisfied that he had staved off any chances of a British invasion. The army and its officers remained dependent on his continued patronage and support. Those who made up these often-overlapping circles of political influence were the bulwarks of the empire, with the bhardars at the heart of governance.

Between 1768 and 1814, “as many as 84 bhardars among a total of 102 belonged to the Shah-Chhetri groups.” Stiller records the instances of 75 promotions in a 21-year period between 1816 and 1837, in which 64 individuals from families of Thapas, Pandes, Basnyats, Shahs, Shahis, Bhandaris and Singhs were promoted. And yet, the government was almost static. In a description that is remarkably resonant to today’s readers, Stiller writes, it was “a group of men in control of the administration who were aging together; who were products of the same thought patterns; and who stolidly held the fortress inner circle closed to new ideas and even a fresh discussion of old approaches.” Stiller argues the promotions indicate that no single family held power during this time. Still, it is clear that the upper echelons of government were closed to all but a few Khas Thakuri men until 1846, when the Kot Massacre ensured even this group would narrow down to one Khas Thakuri family till the year 1950.

From the very beginning of the Empire, the military campaign had been directed by the old families of Gorkha, and it was they who led all arenas of government. “Prithvi Narayan Shah, with his ambition and his undisputed qualities of personal leadership, was only a representative of the political elites of Gorkha,” Regmi writes, whose objective was “to live under a Hindu King of a Kshatriya caste.”

This exclusionary policy, whose effects are visible even today, had an utmost impact on the ‘unification’ project. It would be more accurate to regard the Gorkhas’ military campaign not as a unifying mission, but as an imperial project of the Gorkha political elite that, as Regmi puts it, “sought to extricate themselves from the confines of the Gorkhali hill state and seek their fortunes in the wider Himalayan arena.” Little administrative development was carried out to unify these disparate territories, and most of it was directed towards collecting taxes and transferring the revenue to the capital. The Ranas shifted the authority previously delegated to land holders to modern administrative bodies. But even these institutions were monopolized by the old ruling families that were now under the Rana patronage.

A series of efforts were made to bring the conquered territories under the Khas-Hindu aegis. A legal code, based on principles of Hindu law and local customs, was introduced in 1806 under the infant king Girvan Yuddha’s name. The code incorporated existing caste rules, while also promulgating several laws that intended to keep the administration under check and curb corruption. This included punishing officials who had taken bribes, and an anti-cattle slaughter law under which offenders could receive capital punishment. This code was an exercise in social realpolitik that incorporated non-Hindu indigenous customs as exceptions to the Sanskritic moral codes. And such customs could be practiced as long as a fine was paid. Such an exception may have been fine on paper, but in Kumaon, “such policies increased the financial burden on the people,” writes Regmi. Citing Kirkpatrick, he adds that “such penalties constitute a considerable source of emolument.”

Gorkhali cultural imperialism succeeded in imposing the Khas-Arya Hindu code in territories under its control, but Kumaon’s experience shows that locals regularly flouted the new laws, either by choice or as part of their own customs. In Pyuthan and Solukhumbu, too, residents paid fines rather than following the rule when an anti-cattle-slaughter law was introduced in 1804. Although Jung Bahadur’s Muluki Ain, known for its distinctive adherence to the caste code, has been considered by some as an attempt towards “integration,” its discriminatory nature based on caste status violated this notion by rendering certain groups unequal to others. In any case, the judicial system was overtly in favor of the bhardars themselves, for law gave the jagirdars and birta owners judicial authority as intermediaries between the peasant and the state. This entitled them to exact judicial fines from the peasantry and keep it as their incomes.

What we then have is a military empire that had shaped its administration and economy around conquests; a ruling clique made of select families from old Gorkha that formed the backbone of administration; a bloated military that served little purpose – after 1816 – except as a tool for palace intrigues; a subjugated people whose lands had been expropriated to meet the rising revenue challenges of an increasingly complex Durbar; and an attempt at ‘unification’ through homogenous social and cultural codes. The Ranas in turn shaped the empire into an extractive state in every sense; it achieved a continuity of the Gorkha imperial project that was built around what was an “an autochthonous system, divorced from the needs of the people and even from the historical traditions of the country, and served only the interests of a handful of Ranas and their ubiquitous non-Rana adherents.”

Stiller and other historians stop short of calling the Gorkha conquests an imperial project, while Regmi makes it clear they were imperial in every sense of the word. The modern reader, with the benefit of hindsight, must agree with Regmi.

This is the third installment from our series of essays on the Gorkha Empire. Also read the first and second essays of the series.

Photo credit: “The Kôt at Katmandoo during the Dussera”, Watercolor by Henry Ambrose Oldfield, c. 1855.

By opening up traditional art forms to women and other castes, young musicians are making certain musical heritage like the dapha, believed to be the oldest form of bhajan in Nepal, will live on.

The maharaja and the monarch (Part 2)

Two visits to the United Kingdom in different eras

The First World War and its aftermath

A look back at a pandemic year

Here’s a compilation of 10 of the many stories we at The Record published during the past year, especially during the four-month-long lockdown.