The salt traders of Karnali

The salt traders of Karnali

With the decline of the salt trade, the once-prosperous region of Karnali came to depend on Tibet, the very place it had been trading with for centuries. 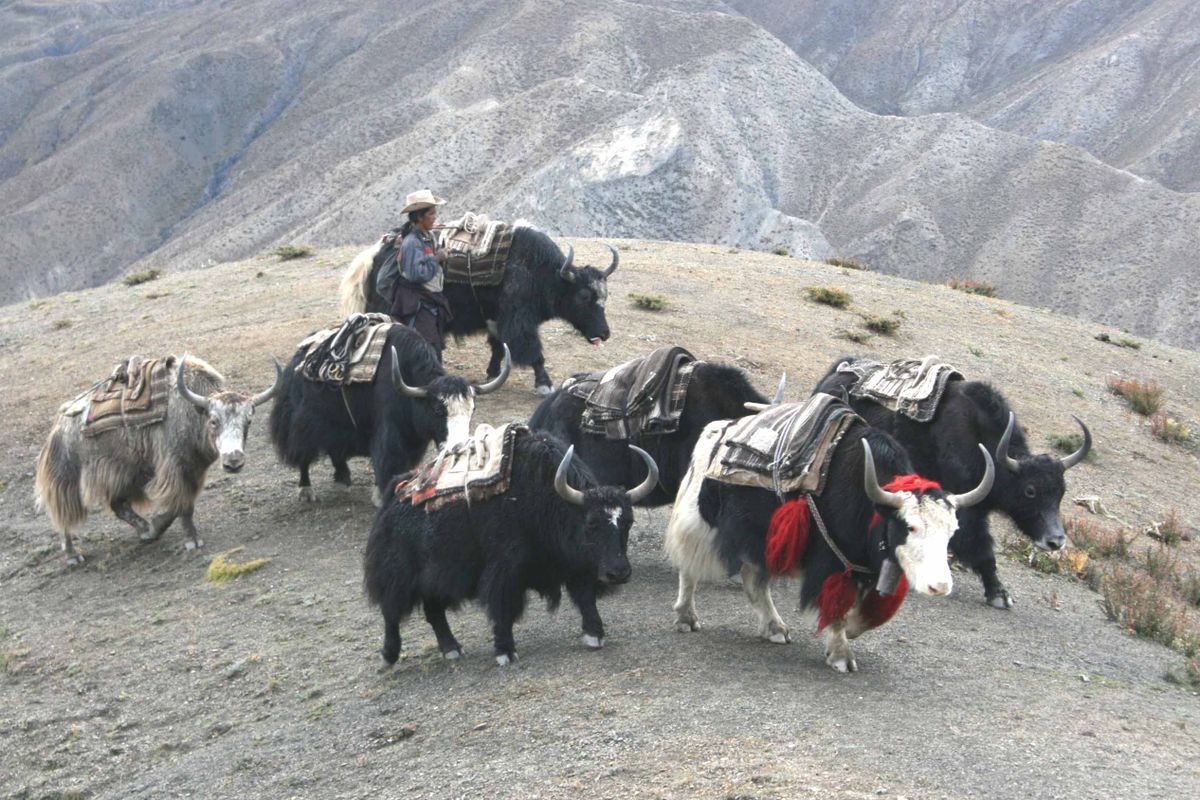 Bartering has been an integral part of human life ever since the dawn of human civilization. Before currency, when nomadic humans lived in herds, barter involved the exchange of tools and weapons with food, clothes, and other necessities. When humans settled down and established cities, barter took on a more organized form with the use of currency, turning into trade.

Many of Nepal’s former kingdoms relied on trade to make their fortunes; chief among them was the Kathmandu (Nepal) Valley but the Khas Empire of Nepal’s Far West was another empire that amassed wealth and influence through trade with Tibet.

The Khas Empire of the Karnali region in the Far West dates back to the 11th century and is believed to have lasted until the 14th century. The Nepali language is believed to have originated in Sinja Valley, currently in Jumla district. It is also where some of the oldest examples of Devanagari script from the 13th century are to be found.

At its height, Karnali was prosperous. The people of the region conducted long-distance trade with Tibet in salt, wool, and grain. Salt and grain were used for food and re-exchange while garments made from wool were sold at the markets. Traders used to travel from Tibet to the mountains and from the hills to the Tarai and even to India.

Along with barter, ideas were also exchanged. Relationships were established between the peoples. Geography was connected by people and people were connected by cultures and relationships. The society that developed was self-reliant and hard-working. Even at that time, each trade group had a team leader, who had the moral obligation to decide where to stay, when to return, and to get the group safely to its destination.

During the rainy season, the Himalayan tribes living in the border areas with Tibet would go north and bring back salt, which was then transported to the middle hills in autumn (Kartik-Mangsir). The salt, along with wool, was exchanged with grains. Khas and Thakuris from the mid-hills would then take woolen garments, silk, and herbs all the way to the Tarai and India. They returned with tea, cigarettes, spices, metals, plastics, and sugar. 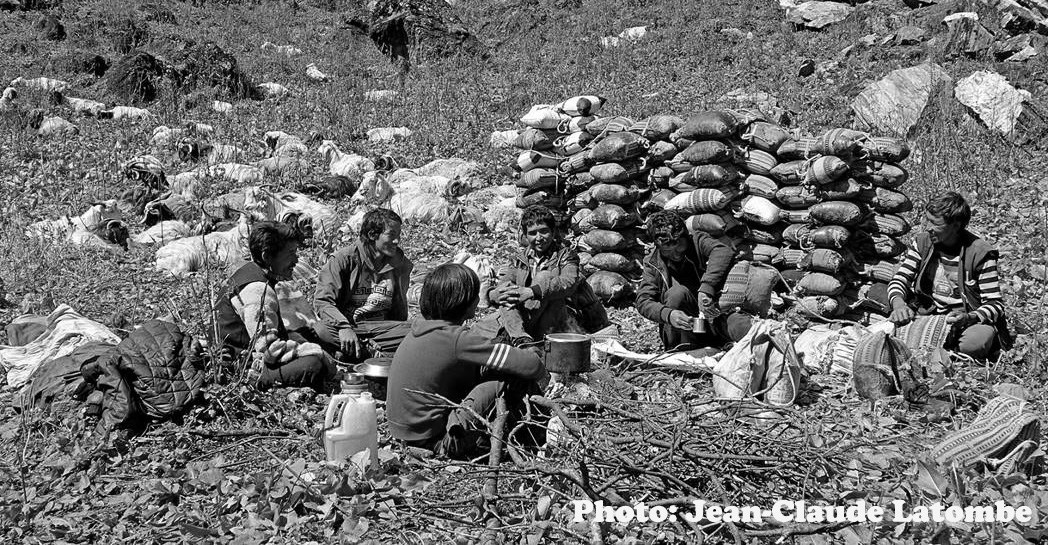 At that time, Tibet had a lot of salt but little grain. Hatarus (Karnali traders) used to supply goods between the two areas through four prevalent routes:

The Karnis of Upper Mugu brought salt from Tibet to the Khasan (Karnali empire) region. The Khas and Thakuris of the Khasan area would transport the same salt to Surkhet and Dang via Jajarkot.

Taklakot, also called Burang, was a very important trade point because of the large number of settlements around it. Buffaloes would be brought for trade Taklakot from Mahakali while Limals brought salt via the Lapcha La and exchanged it around Simikot.

The Dolpo would take salt from Saldang in the Nankhang Valley to Phoksundo and Ringmo, through Rimi and Kaigaun of lower Dolpa, and reach Jumla’s Mani Sangu and Dillikot. After that, the Khas and Thakuri would take the salt to Bajura and Achham.

Dolpos of Upper Dolpa would bring salt through the Marim Pass and Kato Naka to the Tichhurong area. The same salt was then brought to Rukum and Jajarkot and exchanged with rice.

Besides these primary routes, there was a lot of cross-border trade happening with Tibet to the north, the other surrounding kingdoms, and India to the south.

READ MORE: On the road in Humla

In Humla, the hatarus of Limi used to pass Lapcha and go to Tibet. Similarly, the people of Darma, Melchham, Diplang, and Nepka living in the western part of Humla Karnali used to go to Tibet through the Tanke river and exchange salt and grain. Saath Thaple people went to Jopa and reached Bajura and Achham. Similarly, the Baharathapals of Humla used to carry salt and reach Bajura through the Raskot stream while the Limiyals of Limi exchanged salt and grain with the lower Humla Thakuri and Khas. Salt was exchanged for grains as well as cherries, cigarettes, and honey.

The Nechang (Ishta), who were related to the Tarali Magars of the Dolpa Tichhurong area and the Dolpo tribes of Upper Dolpa, would come to Tichhurong in Kartik-Mangsir with bhote (Tibetan) salt and wool, which was exchanged with grain. The Tarali Magars would then take the salt to Rukum and Jajarkot through the south Khasan area in November on bakhes (sheep caravans). They exchanged the salt with rice and returned to Tichhurong in the Nepali months of Chaitra-Baishakh. The wool would be made into sweaters, belts, and rugs and taken to Rukum and Rolpa. From there, these products would make their way to areas such as Butwal, Kalimpong, and Calcutta in India. The traders would bring back tea, horse bells, etc., and return to Tichhurong in May.

The Mugum and Karan of the upper region of Mugu used to pass through Namjala in August and take a yak caravan to Cheptu in Tibet. The Mugum and the Tibetan Drokpas also exchanged salt and grain. In the month of Mangsir, the Mugum and Karnis would take the same salt and wool around Mugu's Gamgadi and reach Jumla's Sinja. There, they would exchange the salt and wool with rice and other grains with the Nechang (Ishta) Khas and Thakuri.

The Khas and Thakuris of Jumla in turn used to reach Nepalgunj and India with salt, wool, herbs, etc. They would bring back spices, tea, sugar, and metal products from Tarai and India, and sell them to the Mugum. 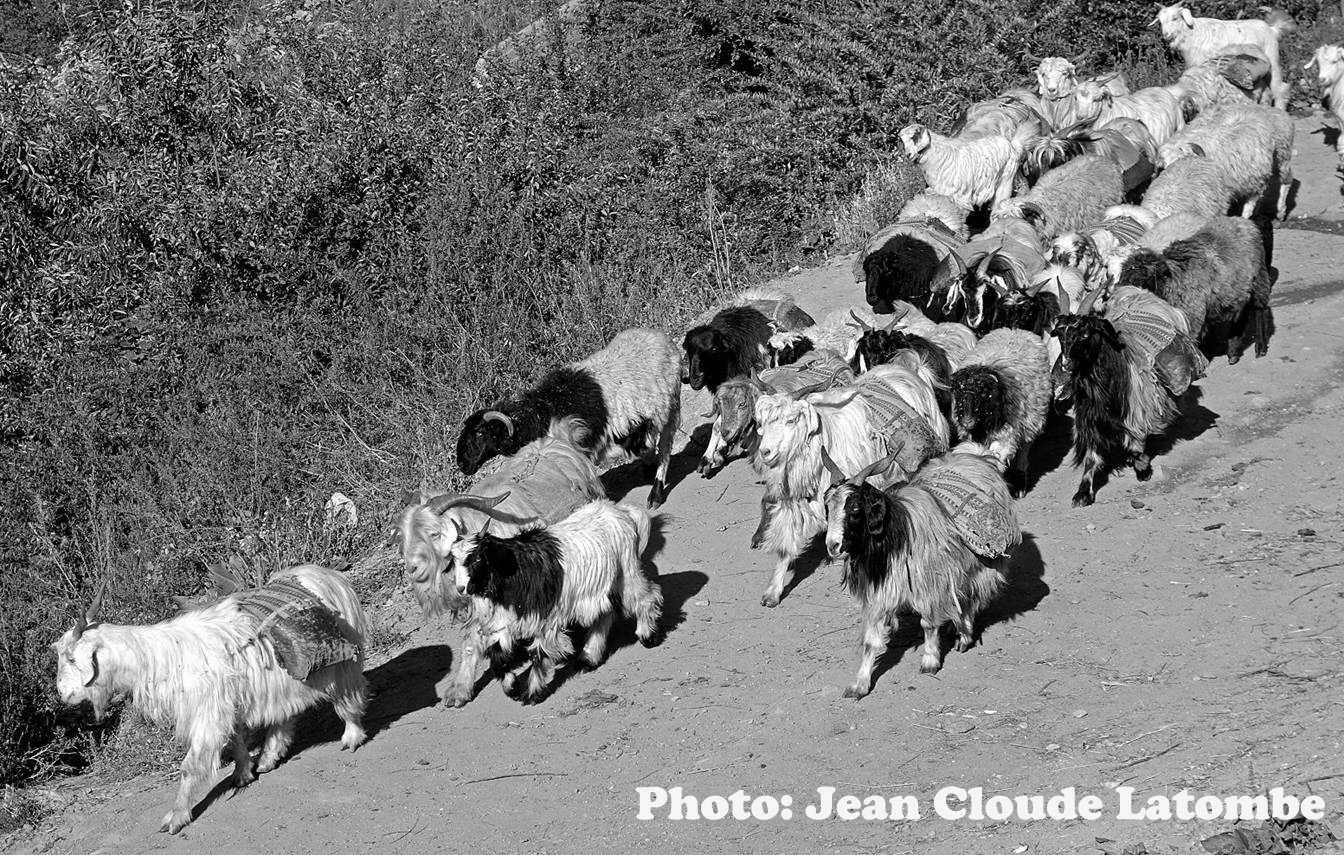 The state of eclipse in the salt cycle

After 1959, there was a significant downturn in the Bhote Noon (Tibetan salt) cycle. The salt trade, which had been going on for a while, gradually became smaller and reached a point of displacement. Anthropologists Christoph von Fürer-Haimendorf, James Fischer, Kenneth Bauer, and geographer Barry Bishop have all written about the declining salt trade in the Karnali region. According to them, one of the primary reasons for the eclipse in the salt cycle was China's tightening of its border policy to keep Tibet under control. This made it more difficult for Karnali people to cross the border like they had done in the past. The Chinese government raised taxes on Bhote Noon in Tibet and introduced a quota system on salt production. This in turn made salt more expensive.

On the other hand, changes in development, such as the construction of the East-West Mahendra Highway in Nepal, the construction of airports, and the establishment of the Nepal Salt Trading Corporation in 1963 began to facilitate the distribution of native salt in mountainous districts by chartering helicopters. At the same time, the lack of open iodine in Tibetan salt, leading to goiters, and the eradication of malaria in the Tarai helped to expand the Indian salt market, which in turn led to the displacement of Bhote salt.

As the salt-grain cycle disappeared, it impacted the lives, knowledge, traditions, skills, and arts of the Himalayan tribes in the Karnali region. Long-distance travel required human resources and polyandry played a significant role in fulfilling that demand. Modernity and the gradual phasing out of polyandry practices affected the availability of human resources.

When China tightened the border, cross-border grazing in the Tibetan plateau became much more inconvenient and animal husbandry began to decline. Yaks, oxen, horses, and sheep, which were instrumental in carrying the salt in caravans, were harder to raise. This in turn impacted the production of woven fabrics such as bakkhu, docha, and kammal.

Tribal knowledge and skills were also in decline. Indigenous knowledge, skills, and art were replaced by modern techniques in irrigation and cloth production. Indigeneous grains and grains obtained through trade had fed the Karnali region for centuries but the arrival of imported grains such as rice and maize impacted the use of these indigenous grains, leading to Karnali being characterized as under a seemingly perpetual ‘famine’.

The decline in the salt trade made the lives of Karnali’s peoples much more difficult and arduous. Karnali was once a prosperous region, with its wealth and sufficiency deriving almost completely from its trade with Tibet.

The Karnali Himalayan region, which used to export grain to Tibet yesterday, is now importing rice from Tibet. Today, in a reversal of fortunes, the highland people of Karnali rely almost entirely on China for rice, flour, ghee, and daily necessities.

This article was originally published in Nepali and has been translated by the author.

Jag Bahadur Budha  Jag Bahadur Budha, student of Anthropology and Law. He is an independent freelancer researcher and writes on history, political economy, culture and law.

What we know about the Bhagrathi Bhatta case so far

In a case eerily reminiscent of Nirmala Pant, 17-year-old Bhagrathi is believed to have been raped and murdered in Baitadi.

Sandwiched between Thamel and Indrachowk, Na: Gha Twaa, or Naghal tole, with its toothache deity and numerous dental practices, has long been a dentistry hub. But things are changing.

All Photos by Prasiit Sthapit

Climate change and its consequences can be serious aggravators ofconflict, especially gender-based violence.

Why Nepal loves Rabi Lamichhane – and why some revile him

Stress and suicide in Nepal’s quarantines