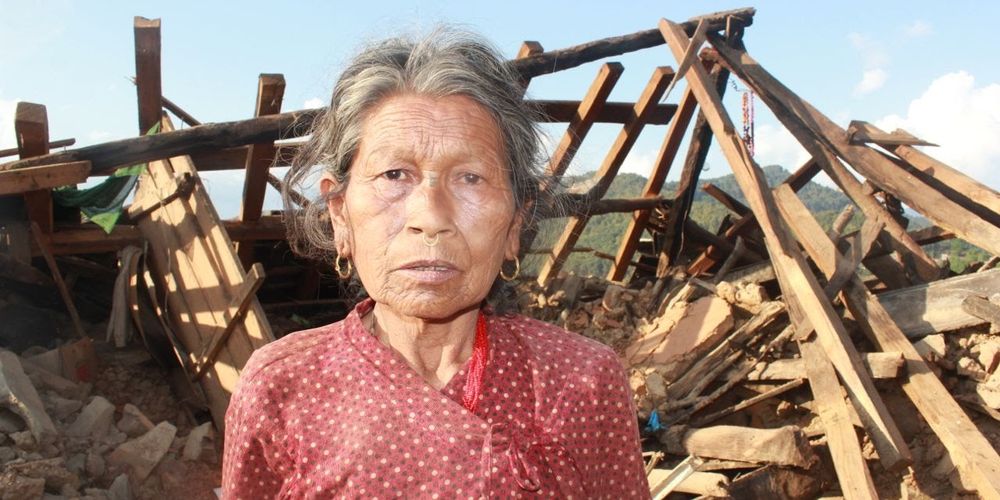 In Sindhupalchowk, home to almost 300,000 people, patience is in short supply, and so is food. Six days after the earthquake, thousands of hungry, homeless, and angry villagers have resorted to obstructing roads leading up to Chautara, the devastated district headquarters, demanding immediate assistance from the government.

Scenes of devastation are visible everywhere, but food and shelter hasn’t reached even the roadside settlements three hours away from the capital.

Harre Dada, which now lies flattened, is one such settlement. “We have received nothing,” said Dil Bahadur Shrestha, as he rummaged through the debris for his belongings with his wife and son. A few houses up, 63-year-old Harimaya Tamang poked the debris of a buried teashop with a stick, trying to salvage packets of noodles and biscuits. About thirty youngsters, apparently reluctant to dig through the rubble, milled restlessly around a retail shop, the only building left standing.

By the roadside sat a family of six who had trekked up from a low-lying village. “We are hungry, we’re sleeping in the open in the rain,” said the young mother. “How long are we supposed to wait for food and shelter?”

The youth obstructing the road near Harre Dada warned that they would burn government vehicles if food supplies did not arrive soon.

“We’ve heard of foreign aid coming to Nepal for earthquake victims. We demand that it is delivered directly to us. We do not trust the government, not after this neglect,” said Rajendra Bogati, as a large contingent of police deployed on the streets gazed warily from their truck window.

A well-dressed politician, too, was present at the scene of the protest. When The Record tried to speak to him, the locals immediately started heckling him.

“The elected representative from this area hasn’t even come to see how we are living,” said Hari Bahadur Bharati of Barko Bot village. “He got elected twice from here, he’s not going to win again.”

The area is represented by Agni Sapkota of the UCPN (Maoist) party. Several others expressed disappointment with the political parties, but the worst invectives were reserved for the government and Prime Minister Sushil Koirala, whose recent address to the nation was subjected to a torrent of ridicule.

In Barko Bot (Ward No. 5, Sanghachowk VDC), all of the 75 households are completely or partially destroyed. The village saw three people die, including three-year-old Muna Puri whose decomposing body was recovered by the Turkish rescue team that arrived six days after she was buried.

Muna was playing with her friend Nisha Puri when the earthquake struck. The villagers scrambled to find her body for four days and then gave up. The rescue team arrived on the sixth day. The villagers watched from the surrounding terraces as the Turkish team dug through rubble all morning. Around noon, a black body bag lay near the Bar tree that gives the village its name.

“On the day the earthquake hit, we went to the police asking for help to rescue her, but they told us to come and report once the body was found,” said Ram Krishna, Muna’s father.

After Muna’s body was found, Ram Krishna reported her death to the Bhanjyang police station in the hope of getting the NPR 100,000 he'd heard that the government has pledged for the families of victims. The villagers then carried the body to a forest half an hour away and buried it.

Belittas Demir, head of the rescue team, told The Record that lives could have been saved if the rescue teams had arrived earlier. This is true for disaster anywhere in the world, whether in Europe or Nepal.

“I try not to get emotional about it,” he said when asked how he felt as he dug up the girl’s decomposing body. “Its just a job . . . But I’m sure the effects of my rescue work will show in the future.”

On the same afternoon, five kilometers away, a Chinese rescue team recovered the bodies of a child and a woman from the debris of a collapsed concrete building.

By the time the men returned from burying the bodies, an old woman was picking up rocks from a site where a building had been reduced to rubble. She was trying to create a place to sleep for the night.

“The dead have it easy,” she said, rolling a piece of rock down the mountain, “it’s the living who have to suffer.”

Not everyone has given up hopes of government relief, however.

“Five thousand villagers stopped a police convoy at Bhanjyang yesterday, and the district superintendent of police promised to come back with six hundred tents,” said Hari Bahadur Bharati of Sanghachowk village. “But none has arrived yet.”

He vowed to keep protesting. The village is planning to form a “struggle committee” to pressure the government.

“I have nothing left to lose,” he added, “I’m not afraid of going to jail. I’ll keep fighting for our right to relief.”

Three villagers The Record spoke to expressed deep cynicism about possible future help, and those gathered in Barko Bot were outraged over media reports, which they claim exaggerated the amount of supplies delivered to the district.

“Some guy dropped three sacks of rice, and wrote a report in Gorkhapatra saying relief had reached our entire district,” Govinda Giri said. (Gorkhapatra is the government-run daily newspaper.)

On Thursday, however, the number of vehicles carrying supplies to Chautara seemed to have increased slightly. But the supply was far too small to meet the needs.

In Jalkeni, another roadside settlement destroyed by the quake, the residents turned down the relief assistance from the police, calling it “too little to make any difference to the community.”

“Don’t insult us,” a woman sitting by the remains of her house said, “we’re not going to have to fight over such paltry offering.”

Cover photo: A woman stands before the wreckage of her home in Sindhupalchowk. Gyanu Adhikari/The Record

We toiled day and night to rebuild our house after the earthquake, and K.P. Oli took all the credit

On April 24, 2016, exactly a year after the 2015 earthquake, Prime Minister K.P. Shama Oli launched the reconstruction campaign by laying the foundation stone for the house of Sarita Tamang in Chautara, Sindhupalchok. Sarita Tamang talks about the media spectacle that surrounded Oli laying the foundation stone, and the subsequent absence of government support during the actual construction work