This week on Writing Journeys, series editor Tom Robertson identifies 20 common mistakes Nepalis make in English and how to avoid them. 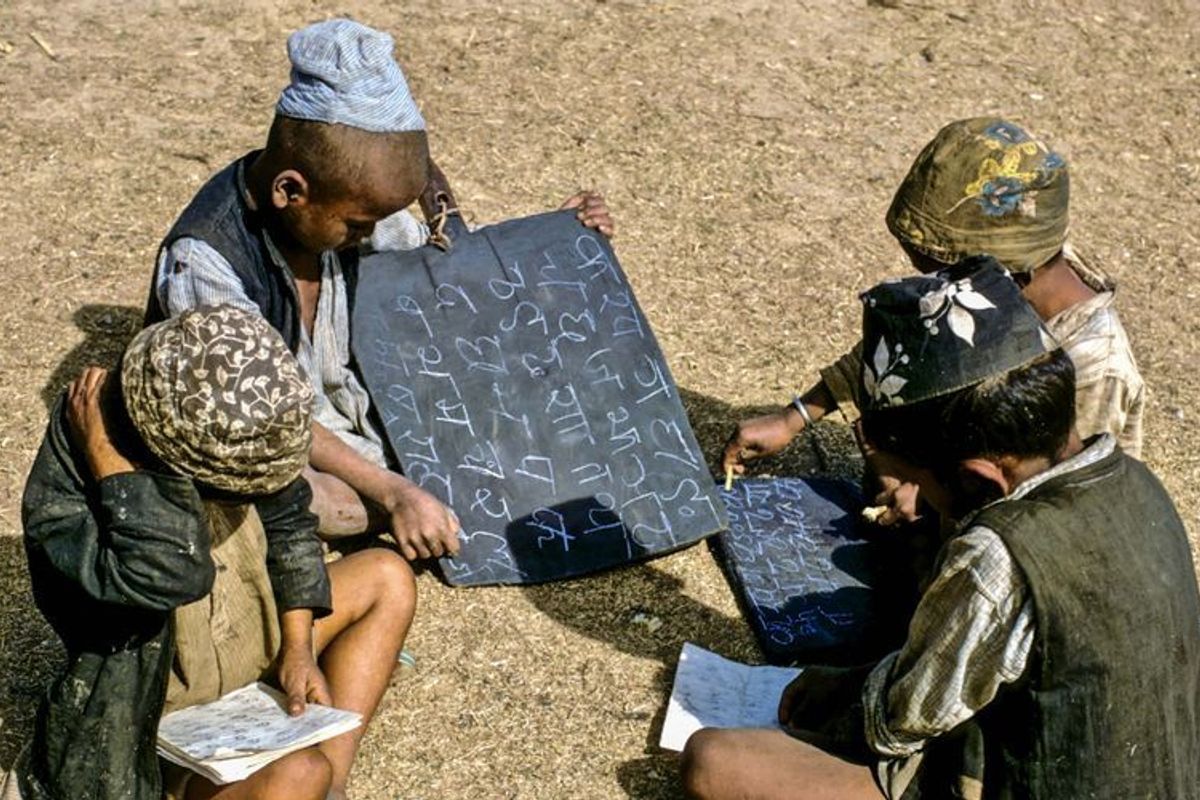 Here are 20 of the most common English language mistakes I see most often in Nepal, and how to avoid them:

NO: I have three brother.

YES: I have three brothers.

I am very surprised by how often I see and hear this mistake. I know why it happens. In Nepali, it’s common to drop the ‘हरु’. But the mistake is easy to avoid.

Some mistakes don’t matter much. This isn’t one of them. It looks and sounds very bad. I will be blunt: to native speakers, this error makes you sound like a child. It is also very easy to fix. So if you make this mistake you look bad twice. You seem ignorant and careless. That’s a bad combination.

Be very careful. You don’t want to make this mistake in writing.

Generally, use ‘to’ for verbs and ‘for’ for nouns.

I’m going to the US to see my father.

I’m going to the US for books on American politics.

I’m going to the US to study.

I’m going to the US for college.

Thanks for showing me the books.

Thanks for doing that.

Nepalis generally capitalize too often. Just because a word is important doesn’t mean you capitalize it. In fact, you should capitalize very few words. These words need capital letters:

Words not to capitalize: economics, infrastructure, professor (unless with a name). Use small letters for most words. For an extremely helpful list of when to use capitals, see The Purdue Owl webpage on capital letters.

Most people misuse semicolons. Over half of the semicolons I see are wrong. And most of the time, they are unnecessary. So it’s a double mistake. That’s why I don’t like semicolons. I suggest avoiding them. Instead, I use full stops/periods (.) and colons (:) much more often.

Semicolon use #1: Semicolons are used to join together two independent clauses to show a very close connection. That means the two pieces could be written as two stand-alone sentences. Normally that is the way to go. Just use full stops.

NO:  During Tihar, Nepali families light oil lamps and place them in their doorways and windows, creating a magical effect; which I really like.

YES: “The food crisis of 2008 continues to remind us that our food security hinges upon a delicate precipice; we may face an even worse situation in the near future with soaring food prices and reduced incomes.”  – Madhukar Upadhaya, ‘Rediscovering millets’, The Kathmandu Post, March 25, 2021.

5. The colon: useful and underused

Here is how Purdue Owl writing lab describes the two main uses of the colon. Both are useful, but especially the second one.

Colons (:) are used at the beginning of lists of several or more items, or as a substitute for “it is, “they are,” or similar expressions:

(P.S. I also like dashes. See Purdue Owl on dashes and hyphens.)

People often make mistakes with parallelism/consistency on CVs/resumes. It kills their chances.

‘A/an’ is used to refer to a non-specific or non-particular member of the group. For example, “I would like to go see a movie.” Here, we're not talking about a specific movie. We're talking about any movie. I don't have a specific one in mind.

This is another common mistake. It makes your writing almost unreadable. You must separate paragraphs with an empty line or an indent, or both. If not, it is extremely difficult to read. I won’t read documents sent to me without indents or paragraph breaks. I throw them in the dustbin.

Pay very close attention to formatting. It is much more important than you think.

Many people misuse ‘had’, as in “I had gone to Kathmandu.” They think that you say “I had finished” for “a long time ago” and “I finished” for something finished recently. That’s wrong.

‘Had’ isn’t used to show events ‘a long time ago’. It is used to make comparisons, to show something before a second event. There must be two events compared (or an implied comparison) or you can’t use ‘had’. That means you can use ‘had’ to refer to events from this morning, if they happened before some other event.

YES: Before you arrived 10 minutes ago, I had already finished watching the movie.

Use the simple past even for events long ago:

Compare: (These have very different meanings.)

‘Mention’ is misused by Nepalis 95 percent of the time. Mention means to casually and briefly refer to. It often means refer to but not give details. If an author devotes a whole chapter to topic X, you don’t say “He mentioned X.”

YES: Yesterday, my brother mentioned he was going to Pokhara next year but he didn’t give any details.

NO: In a long section of the report, the author mentioned three important subjects.

In the report example, if it’s more than a very quick reference, then ‘mention’ is not appropriate. You want something more substantial, such as document, examine, describe, discuss.

YES: In the report, the author described three important subjects.

‘Since’ is common in spoken language. It’s fine. But ‘because’ is more common in written language. For some reason, Nepalis avoid ‘because’. I don’t know why.

YES: Because it might rain, I brought an umbrella.

Many people overuse ‘therefore’ and ‘hence’. After they learn they are supposed to use transitions, they start putting them everywhere, even when not needed.

If the logic of the sentence is clear, then you don’t need therefore or hence. Only use therefore or hence after a very clear logical sequence and when it would be confusing without, and not just to say, “here’s my main point.”

For more on transitions and signposts, see:

This is a common mistake.

NO: River quality has decreased since the last few years.

YES: River quality has decreased since a few years ago.

‘Post’ is not the same as ‘after’. ‘After’ is much more common to mean ‘पछि’. You can use post only for nouns and only in some situations, generally to describe a time period, such as the post World War II decades.

YES: In the post-earthquake period,…

YES: After the earthquake, many people moved to the city.

NO: Post-earthquake, many people moved to the city.

I think some people use ‘however’ because they think it sounds sophisticated. But you should actually use ‘but’ much more often, even at the beginning of the sentence. Another problem with ‘however’ is that it often (when joining two independent sentences) requires complicated punctuation. Many people get this punctuation wrong. But ‘but’ does not need special punctuation. That’s another reason it’s better than ‘however’.

Generally avoid it. (People like to use it as a translation of ‘हुँदा खेरी’ but that’s Nepali, not English.)

NO: From being habitat for flora and fauna, ponds also recharge ground water.

NO: The cost of unplanned urbanization is being paid with the exploitation of rich agricultural land, wetlands and open spaces of the Valley.

Avoid ‘aforementioned as it is generally used only in legal contracts and documents.

NO: We are proposing a funding of approximately USD 16,735 to implement aforementioned activities to prevent COVID-19 incidents and mortality in Nepal's rural villages.

YES: We are proposing a funding of approximately USD 16,735 to implement these activities to prevent COVID-19 incidents and mortality in Nepal's rural villages.

Use singular for adjectives before a noun. For instance, these are wrong:

All three can be correct depending on the context. Note that the second and third examples have the same meaning! Both can be used for many students. I use the third one. Why? Because it’s much easier to say (no ‘s’) and easier to write (no apostrophe)

Another example: Economists study worker productivity. (This is correct. It doesn’t mean just one worker. It means the productivity of many workers.)

For any and all grammar, punctuation, and writing questions, see the Purdue Owl website. It’s really excellent. The internet has lots of great resources. If you really want to improve your writing, you need to master not just grammar but these writing principles:

These principles are much more important than grammar and punctuation.

For ideas and strategies on these writing principles, see the Mitho Lekhai video series on Youtube and Facebook and the Purdue Owl writing lab webpage.

Tom Robertson  Tom Robertson, PhD, is an environmental historian who writes about Kathmandu and Nepali history. His Nepali-language video series on writing, 'Mitho Lekhai', is available on Youtube. His most recent article, 'No smoke without fire in Kathmandu’, appeared on March 5 in Nepali Times.

As a writer just starting out in publishing, Tim Gurung encounters harsh criticism and petty jealousy but that only emboldens him to push further.

Sahina Shrestha: ‘I like exploring different forms of storytelling’

This week on Writing Journeys, the digital editor of Nepali Times reflects on starting out writing and in journalism, and provides insight on how to tell stories through video.

Living through a changing literary landscape

A 1963 interview with writer and critic Krishna Chandra Singh Pradhan

Manjushree Thapa: ‘It never gets easier, but I love writing’

In this edition of Writing Journeys, novelist and translator Manjushree Thapa illustrates her difficulty in getting from draft to draft and her complicated relationship with writing.

The book is a reminder that here are first-rate minds at work who can grapple with the “big questions” as well as anyone.

The strange and compelling worlds of Dhruba Chandra Gautam

“My writing is like a playground where I want readers to interpret their own meanings, find their own understanding in my words."

Chaitanya Mishra: ‘I enjoy seeking to answer the question ‘Why?’’

Nepal’s preeminent sociologist, on this week’s Writing Journeys, offers insight into his academic journey, and asks students to read actively and question the text.