A long-term, green solution to Kathmandu’s waste problem could be to adopt waste-to-energy technologies on a large, commercial scale. But can it be done? 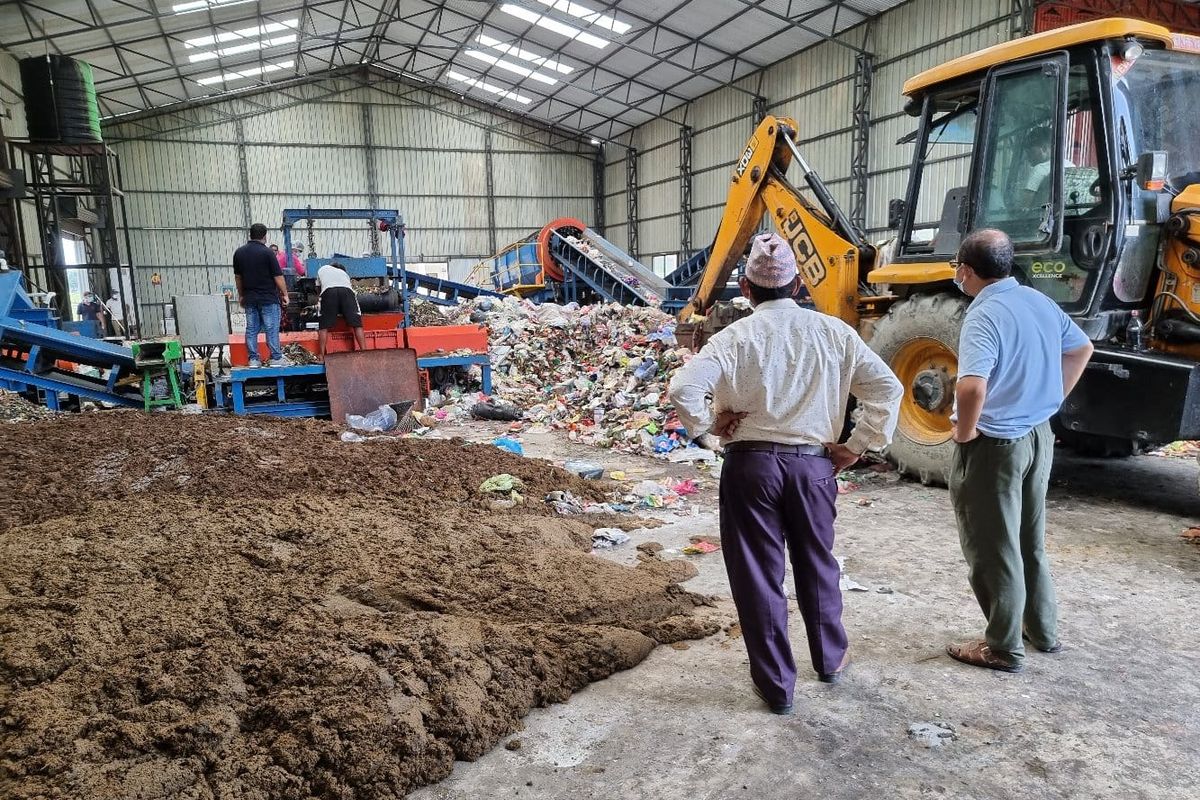 Organic waste being converted into energy through a process called anaerobic digestion at Ventures Waste to Energy's station in Dharan. (Bipul Raj Pandey )

Images of garbage piled up on Kathmandu’s streets had saturated the media landscape the past few weeks. Disputes with locals from Sisdole, the landfill site for the Kathmandu Valley, had led to a halt in garbage collection, leading to mounds of rubbish festering by the roadsides. But now that new Kathmandu mayor Balen Shah has managed to hammer out a deal with the locals, garbage collection has resumed and the piles of garbage have gradually disappeared.

Yet, dumping hundreds of tons of municipal waste every day into an already at-capacity landfill is not a long-term solution to Kathmandu’s trash problem. Mayor Shah has proposed solutions that could lessen the waste burden, like segregating household waste at the source into organic and non-organic waste, which would in turn allow better recycling of non-biodegradable waste while organic waste could be turned into mulch, compost, or even used to generate biogas and electricity.

Waste segregation is easily implementable, as long as the municipality makes it a priority but generating energy from waste is a wholly different area, as it requires investment, infrastructure, and expertise. The question that many are asking now is whether Kathmandu can adopt waste-to-energy technologies on a large, commercial scale.

“There are individual projects converting waste into energy all over the country,” said Rana Bahadur Thapa, assistant director of the government’s Alternative Energy Promotion Center (AEPC). “In Pokhara, a plant supplies hotels with gas generated from waste to cook food. In Syangja, a farmer’s waste-to-energy project supplies electricity for chicken farms. There are also two similar plants in Nawalparasi and one in Ghorahi.”

Nepal has long been producing energy from waste, primarily methane, albeit on household or community scales. Nepal’s first biogas project, which generated methane from cow dung (‘gobar’ gas), was developed in 1975. By 2005, there were over 140,000 small-scale gobar gas projects around the country. But large-scale commercial plants are fewer in number. Although Thapa said that AEPC does not have the exact number of such projects around the country, a recent report by Nepali Times says that there are around 344 large-scale biogas plants in the country that provide cooking gas to 300,000 rural households.

Countries around the world have turned to waste-to-energy projects in order to manage their solid waste while also generating clean energy. But while many developed countries are generating electricity from waste incineration, there is still a debate over how ‘clean’ this energy is and if incineration is even a suitable method for developing countries.

“Incineration is not a sustainable method to convert waste into energy,” said Bipul Raj Pandey, co-founder of Venture Waste to Energy, a private company contracted by Dharan sub-municipality to turn waste into energy. “Waste is different in the east than in the west. We generate less packaging and more organic waste.”

According to a 2020 waste management baseline survey conducted by the Central Bureau of Statistics, Nepal generates nearly 2,233 metric tons of waste a year, of which 54 percent is organic. In Kathmandu, organic waste is believed to make up nearly 70 percent of its total municipal solid waste. A 2018 paper in the Journal of the Institute of Engineering placed Kathmandu’s waste-to-energy potential at 19MW but organic waste, says Pandey, can be better harnessed to produce bio-CNG (bio-compressed natural gas) than burned in incinerators to produce electricity.

Initiated only a few weeks ago with the investment of Rs 250 million, Ventures Waste to Energy currently supplies biofuel to four auto rickshaws in Dharan but has the capacity to provide enough fuel for 250 to 300 autos daily, according to Pandey.

The company’s plant has the capacity to produce 1,200 kg of biogas per day by processing 30 metric tons of municipal solid waste. However, the plant is currently processing only 13 to 18 metric tons of waste. The company is waiting for clearance from the Department of Transport Management.

“The waste is first segregated into organic, non-organic, recyclable, non- recyclable, reusable, and non-usable. Reusable waste is sold to the market and non-recyclable materials are sent to the landfill after being sanitized,” explained Pandey. “Organic waste is converted into energy through anaerobic digestion. Here, the pulp generated from waste is mixed with water and fed into a digester to be converted into gas over 21 days. We first store non-refined gas into balloons which is later converted into 90-92 percent methane. The purified gas is then compressed into cascades to fill autos.”

While Dharan appears to be leading by example, all eyes remain on Kathmandu and the new leadership’s commitment to produce energy from waste. Kathmandu already piloted a biomethanation plant at the Teku waste transfer station in 2017. While the initial aim was to produce 14MW of electricity, it is unclear whether this has been achieved.

“We are still exploring the prospects of waste to energy conversion and don’t have anything tangible to share at the moment,” Sunita Dangol, Kathmandu’s deputy mayor, told The Record. “We have been focused on policy formulation and have separated a budget for waste management.”

Acknowledging the need for a permanent sustainable solution and drawing on her recent experiences with Sisdole locals, Dangol said that community support would be a prerequisite for any such project.

“We have asked our ward chairpersons and members to evaluate if it would be appropriate to establish a plant per ward or if a single plant would suffice. We are also going on field visits to acquire information from other areas to learn from them,” she said.

More and more Nepalis are being pushed out of their homes by extreme weather events, agricultural difficulties, and the pursuit of economic freedom from the elements.

The decision to build new headquarters inside Teghari Forest has divided politicians, locals and environmentalists in Sudurpashim

How do high flying Himalayan birds survive the frigid cold?

Tiny mountain birds are like the superheroes of the bird-world, surviving by adapting to freezing temperatures with the help of their feathers.

Environment conservation takes a back seat in the budget

The government’s decision to resume the export of sand and gravel to reduce the trade deficit will lead to the wholesale exploitation of the environment, say conservationists and lawmakers