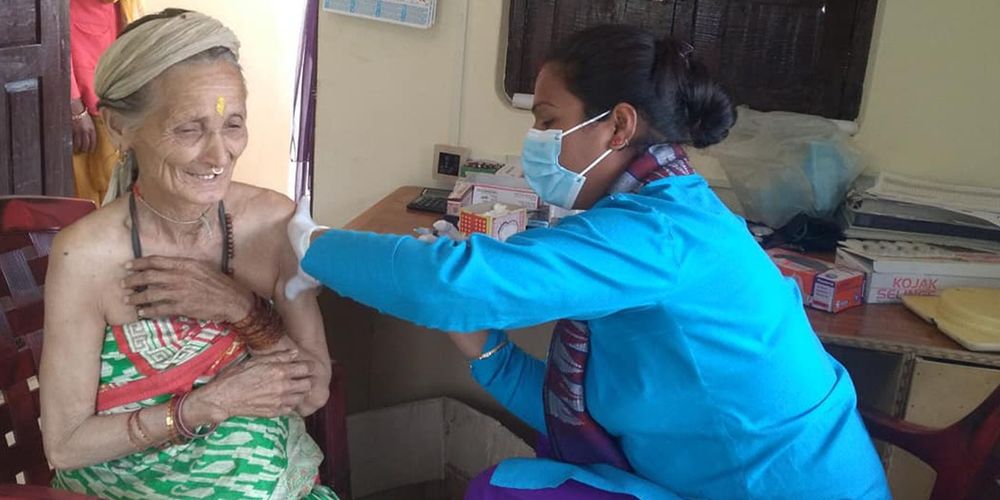 After months of waiting and numerous international pleas for help, there is hope that Nepal may finally be receiving more vaccines. But that hope is shrouded in uncertainty.

Despite a number of countries, including the United States and the United Kingdom, announcing aid packages for Nepal, none, except for China, have come through with vaccines, which many public health experts say are what Nepal currently needs most.

On June 3, the White House announced that it will be allocating 7 million vaccines to South Asia, of which Nepal would receive a certain share. There has been no announcement since on how many vaccines Nepal can expect and when.

Similarly, the UK clarified to The Record that no new vaccine allocations to Nepal had been made and that all assistance would come through Covax. News about the Danish government supplying Covishield vaccines directly to Nepal also turned out to be fake, according to the blog mysansar.com. Dr Jhalak Gautam, chief of the vaccine section at the Department of Health, also confirmed to The Record that no vaccines were coming in from Denmark.

While India remains in the midst of a crisis of its own, only China has so far come through with assistance. On June 1, China provided another 1 million doses of the Verocell vaccine as a grant, in addition to the 800,000 doses it had already provided in April.

The Nepal government has also been attempting to purchase vaccines but has had little luck. Overtures to American pharmaceutical companies like Pfizer, Moderna, and Johnson & Johnson have not yielded any results with Nepal being told to await shipments through Covax, according to Nepalis involved in negotiations.

Read also: A million vaccines to come from China, but will it be enough?

However, a Cabinet meeting on June 14 decided that the Nepal government would purchase 4 million doses of the Chinese Sinophram vaccine. According to The Kathmandu Post, a non-disclosure agreement regarding the purchase has been signed between the Health Ministry and Sinopharm.

Dr Krishna Prasad Poudel, director of the Department of Health Services’ Epidemiology and Disease Control Division, confirmed to The Record that a deal had been struck but was unable to provide details.

“The vaccines will be delivered through different phases, but the total number of vaccines and an arrival date have yet to be decided,” said Dr Poudel.

In addition to these vaccines, COVAX, the global vaccine-sharing alliance, has also indicated that it will be dispatching the second consignment of vaccines to Nepal. But despite numerous news outlets reporting last week that a shipment would arrive this week, UNICEF, the UN agency coordinating vaccine procurement and distribution for COVAX, has said that there is no timeline yet.

“We do not currently have a specific arrival date for the next vaccines from the Covax Facility,” said Tania Dhakwa, chief of communications at UNICEF Kathmandu.

COVAX -- a partnership between The Coalition for Epidemic Preparedness Innovations (CEPI), Gavi, the Vaccine Alliance, and the World Health Organization (WHO) -- had allocated a total of 1.92 million doses for Nepal, which it planned to deliver by the end of May. But global shortages and vaccine hoarding by wealthy countries have meant that COVAX has largely fallen short of this goal. UNICEF has repeatedly called on wealthy countries to donate their vaccine stockpiles.

“We are pleading with countries which have extra doses to step up and cover the shortfall so that those countries that received first doses via SII [Serum Institute of India] are able to receive a second dose,” said Dhakwa in an email response. “We know that the longer the virus continues to spread unchecked, the higher the risk of more deadly or contagious variants emerging. That’s why we are urging countries with excess doses to share those doses as an immediate stop-gap measure.”

Nepal is among the countries that desperately needs second doses of the Covishield vaccine. Armed with a shipment of 1 million Covishield doses provided by India as a grant and 348,000 from COVAX, Nepal, in March  had vaccinated 1.4 million elderly people with a first dose. Almost four months later, they have yet to receive their second doses.

The Nepal government has since been scrambling for vaccines and inoculating vulnerable populations with the stock it has in hand. On June 8, it began providing vaccinations to the elderly population above 60 years of age and below 65, a group that had been excluded from previous vaccination drives due to a lack of data on this specific population. But with the WHO providing emergency authorization to the Verocell vaccine and recommending no upper limit, those above 60 are now eligible for the vaccine.

“If the new vaccines come along, the priority will be given in terms of age group, which is to say the elderly population throughout the country will be prioritized,” said Poudel.

Owing to the scarcity of the Covishield vaccine, COVAX has urged the Nepal government to switch to other alternatives, which the country is already doing. But as mixing and matching vaccines are not recommended, this at-risk population will have to await a second dose.

“We have not received the remaining consignment from the purchased doses of Covisheild vaccines yet, so the chances of getting them through the COVAX facility is minimal. We are lacking about 1.4 million doses of Covishield vaccine. If we get it, it will be directly supplied and not through the COVAX facility,” said Poudel. “The government, including President Bidya Devi Bhandari, is trying to do all it can to get the Covishelid vaccine, but no deal has been made as of now.”

Most coronavirus vaccines require two doses -- except for the Johnson & Johnson single-dose vaccine -- with a certain gap between doses. The first dose builds an immune response while the second dose helps strengthen it. It is only after a person gets two full doses of the vaccine that they are fully protected.

“The gap of 12 weeks is considered more effective than just six weeks, but there are limited studies or data about what happens if it gets extended for a longer time, especially in regards to this particular vaccine,” said Dr Anup Subedee, an infectious disease specialist. “But the boosting effect is memorized by the immune system, so it will be worth getting the second dose even after six months.”

However, there are concerns about equity even with the current vaccination drive for people over 60 years. Within the Kathmandu Valley, the vaccine is being provided to the 60-64 age group while outside the valley, only those between 62 and 64 years of age are eligible.

Dr Shyam Raj Upreti, coordinator of the Covid Vaccine Expert Advisory Committee, told Ujyalo online that this discrepancy can be attributed to the scarcity in vaccines as there weren’t doses to vaccinate everyone in the 60-64 age age group with both doses.

“The total population of the 60 to 64 age group is 854,000 and in order to inoculate them with both doses, more vaccines were needed,” Poudel said.

Furthermore, not all elderly people above the age of 65 have received even a single dose of the Covishield vaccine. The total population of this age group is around 1.7 million, which means around 300,000 elderly people, mostly in rural areas outside of urban centers, have not even received a first dose.

Currently, a total of 8.5 percent of Nepal’s population has  received at least one dose of a vaccine while 2.4 percent have received both doses, according to the Health Ministry. Second doses of the Chinese Verocell vaccine were given to all adults between 18 and 60 in April, after the Chinese grant arrived.

The federal government, along with its diplomatic corp, has been lobbying for vaccines across the world, but to no avail.

“There’s a scarcity of vaccines in the world but the government is trying it’s best to procure them,” said Poudel. “Imposing a lockdown is definitely not the solution. All of us should be cautious and responsible about the risks and continue to follow all safety protocols.”

In May, the country saw its highest single-day peak of coronavirus cases, reporting 9,317 new cases and 225 deaths, including the number of casualties managed by the Nepal Army on different dates. Many districts, including the three in the Kathmandu Valley, have been under lockdown for more than six weeks now. Cases have fallen dramatically, and the lockdowns are slowly being eased, but without enough vaccines to inoculate the public, fear of the virus remains.

“The variants are more transmissible and as of now, even though the chances are lower that new variants might arise, it is still very hard to predict what the situation will be,” said Dr Subedee. “Proper system for technological surveillance, contact tracing, testing, isolating, quarantine, tracking new variants, and monitoring data should all be taken care of in order to curb any further spread.”

UPDATE: The Health Ministry released a statement on Friday saying "media reports on quantity, price, delivery and other relevant information about the vaccine procurement are...premature, inaccurate, speculative and misleading."

Women are seen as victims in the fight for climate justice, and that needs to change

Everything you need to know about the vaccines arriving Thursday

Tablighi Jamaat and the precarity of global governance

The second wave is here

Nepal reported over 1,200 new infections on Monday, leading the government to close down schools in urban areas.

Nepali students in the US tread on thin ice

For many, graduations have been postponed as their finances have dwindled