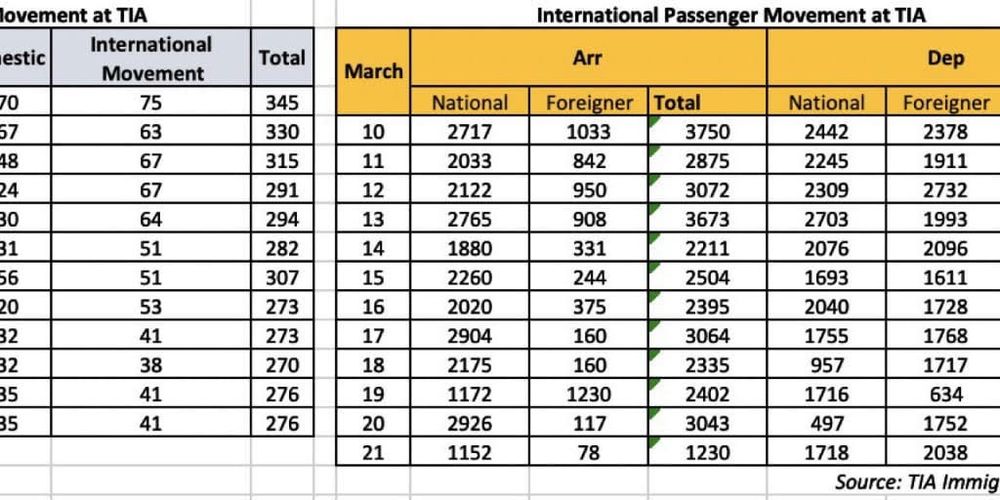 In what can be described as sheer negligence of public health safety, authorities made no attempt to quarantine hundreds of suspected cases of Covid19 or monitor the self-quarantine of thousands of travellers who entered Nepal from countries affected by the virus, the Record can reveal.

Documents obtained by the Record show that over 19,000 passengers have entered Nepal through Tribhuvan International Airport since 14 March, many travelling in from countries grappling with Covid19. From midnight, 22 March, the government suspended all international passenger flights. The pandemic, caused by a novel strain of coronavirus, has globally claimed the lives of more than 24,000 since the first death was reported in China in January.

The disclosure comes at a time when public health experts are calling authorities to screen all recent travellers including returnee migrants workers and students after a Gulf returnee became the third confirmed case of Covid19 in Nepal on Wednesday. Before this, two students travelling in from China and France had tested positive. The first student, who tested positive back in January, has already recovered.

Hom Nath Thapaliya, an official at TIA Immigration, said that the passengers were allowed to go home after basic health screening. "We let them go on the condition that they would follow the 14-day quarantine as prescribed by the government," Thapaliya told the Record.

Analysis of the document shows that over 4,000 passengers had entered Nepal by air since 20 March when the government barred entry to passengers flying in from countries in the European Union, West Asia and the Gulf as well as Turkey, Malaysia, South Korea and Japan. Of these, only 67 were sent to the quarantine facility maintained by the army in Kharipati, even as many had come from or via restricted countries.

Notwithstanding the probable risk they posed to public health safety, authorities didn't even bother to monitor the thousands of travellers. Of the four migrant workers that the Record spoke to who had returned on a Qatar Airways flight (QR 652), none recall being given specific instructions by airport authorities on quarantining and all claim to have not practiced self-quarantine.

"I didn't stay in isolation as my health was alright," one of the workers told the Record.

Following the confirmation of two more Covid19 cases since Monday, the government has started the process of tracking passengers who returned on the same flight with them. But most of them are still out of contact.

"Our team has been working to track all the passengers as requested," spokesman for the Nepal Police Umesh Raj Joshi told the Record.

Many experts have stressed on the need to screen passengers who had boarded the same flight as those who tested positive earlier this week. Dr Sher Bahadur Pun, coordinator of the clinical research unit of Sukraraj Tropical & Infectious Disease Hospital, told NepalKhabar, a Nepali news portal, that the government should screen everyone who had recently returned from abroad.

However, Dr Basudev Pandey, chief of Department of Health Services Epidemiology and Health Control Division under the Ministry of Health and Population, said that there was no need to panic. Dismissing media reports that the government was preparing to test all passengers who were onboard the flights taken by the two Covid19 patients, Pandey said that only two or three dozen passengers will be tested.

"This virus isn't something that can travel in the air due to the density of its molecules. It is very likely that those sitting near the infected persons - including in the immediate front row, back row and side rows - might get affected," Pandey, an expert on epidemics, told the Record. "That's why we have recommended screening around a dozen people sitting near them and keeping close eyes on others."

The Record also spoke to Dr Kripa Regmi, Infection Control Epidemiologist at a hospital in Southern Nevada, USA, who agreed that testing was not required for all passengers on the two flights.

“I think they should all be monitored for temperature for the next 14 days. If their temperature spikes then you would have to test them,” Dr Regmi said.

Researchers who analysed data from the outbreak on the Princess Diamond cruise ship show that of a total of 634 people tested positive among 3,063 tests, upto 18% were asymptomatic. Given that a large number of passengers included the elderly who were more prone to developing severe conditions, the percentage of people who contract the virus but do not show symptoms in the general population may be higher, according to an expert.

The demographic of passengers flying into Nepal between 14-22 March has been disproportionately younger. How this affects the number of asymptomatic carriers and their impact on the spread of Covid19 in Nepal is yet to be seen.

Covid19 Roundup, 8 May: Cases reach 102 while all MPs have been cleared

When women who speak up face lawsuits

Changing weather patterns, a possible consequence of climate change, have already stopped apple farming in the region and are now threatening potato production.

Sapana Sanjeevani’s poem took aim at the patriarchal foundations of religion and society, and for that, she’s become the target of death and rape threats.

The old weight of caste

Throughout Nepali history, the brutality of the caste system has stunted social transformation