“While a communist party has emerged victorious, the working class continues to suffer”: Biplab

“While a communist party has emerged victorious, the working class continues to suffer”: Biplab

The underground Maoist politician talks about his plans for another revolution 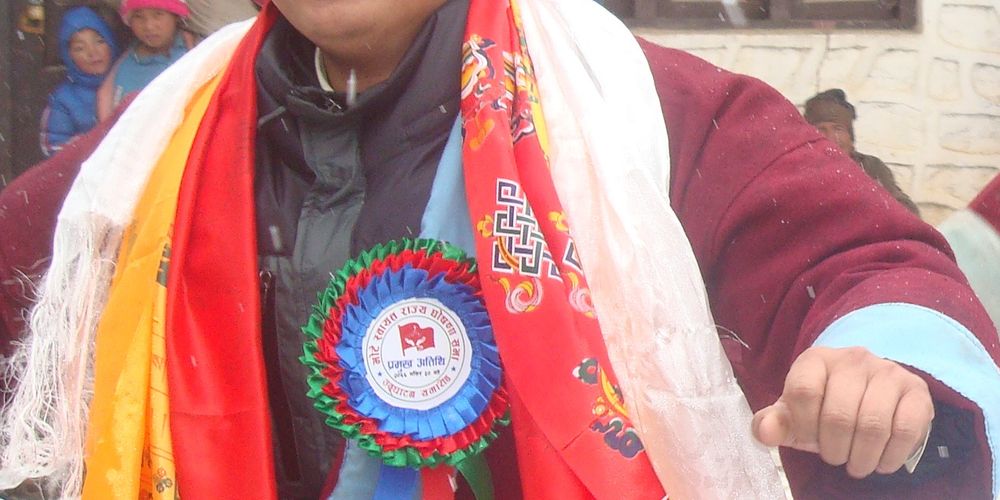 For Netra Bikram Chand ‘Biplab’, the Maoist politician who repeatedly splintered from several Maoist parties to form his own Nepal Communist Party, the revolution didn’t end in 2006 when the rebels gave up guns to join the peace process. He has managed to organize the Maoists disgruntled with the peace process and mobilized them unsuccessfully to obstruct the second Constituent Assembly elections. At present, his party has tried to project itself as a formidable force in politics with a mass rally in Kathmandu and is resurrecting the parallel ‘people’s government’ structures seen during the insurgency years. As the government’s lackadaisical efforts at a peace talks lead nowhere, The Record asked ‘Biplab’ , supposedly “underground” about his party’s politics. The interview, edited for brevity, was done through email.

The KP Oli government formed a committee to negotiate with your party. But you denied the offer. Why?

No, it is not that we have accepted or denied the negotiation offer -- there has been no formal invitation for negotiations.

After the insurgency, the Maoist party you belonged to led and participated in several government. What came out of this ?

The positive changes from the perspective of reformists is that feudalism ended. Nepal became a republic with the rise of crony capitalists. As Marx and Engels declared in the communist manifesto, crony capitalists take  state power after both sides have rested arms. This is the historical burden and a joke. Nonetheless, revolutionaries have rejected this and have started a new chapter for united people’s revolution.

Where do you see Nepali politics in the next 10 years? What do you think will happen to the living standard of Nepalis in that time?

Nepal will continue to tread on the path of crony capitalism. What has happened now is that while  a communist party has emerged victorious, the working class continues to suffer. Even if there was a dismantling of the people’s government, the monarchy and the royal army who were in direct conflict with us lost. Suddenly, the  crony capitalist class rose to power. Since they became influential, the country and the people are in crisis. Suppression of the populace, corruption, rape and inflation has fermented at an accelerating pace.

Many have  started thinking of you as the second version of Prachanda. How will you take the Nepali people in confidence so that they allow you the opportunity to lead them?

Yes, some rotten people compare me with Prachanda. This is an example of attacking revolutionaries.  Suggesting that we are like Prachanda is a tactic to make people disillusioned with scientific socialism. But this tactic has already failed. Your question is invalid because we have let go of our private lives and mainstream political opportunities for the sake of scientific socialism.

Prosperity has become a popular slogan in the political marketplace. KP Oli led communist and the Congress have been  clamoring about economic opportunity. Do you have a different perspective on this matter?

When people were sold like animals during slavery, the lords said that it was for the sake of prosperity. The feudalists lulled the world to commit inhumane crimes, they said they were spreading prosperity in the world. Today the capitalists control the people and they talk about prosperity.

In Nepal’s case, it is the old structures, old economy and the old powerful class are prevalent. So where will KP- Prachanda sprout that prosperity from! Are they going to make prosperity rain from the heavens? look at the arguments made by Prachanda 13 years ago, or for that matter, what  KP Oli, Madav Nepal, Jhalanath Khanal or what the Congress said when they advertised for multiparty democracy. Didn’t they say that the corrupts were cheating the people, and that the Congress and UML will sweep them away from power? Feudals and the cronies have to be rooted out, was their argument then. How can the same leader and the same power structure be for the prosperity of the people? All this is just a cover for their own moral decline.

Hundreds of bombs went off during the election time. Your party cadres were injured. One individual died. But why is your party quiet about it? Are you not responsible, or is it that you cannot take responsibility?

We demanded the end of the reactionary election. For that we tore the pamphlets and the powers, and made appeals. We said we would take powerful actions.  If suppressed, we said we would continue with our protests. That is what we did, and we took responsibility for it. One thousand of our party members were arrested, and we continued with our protest.  While protesting not one but two comrades—Comrade Sunrise and comrade Dhanrup— were martyred. We declared them as martyrs, started constructing conference buildings in their memory. We treated the wounded. We protested against the police and captured election booths, so where is the confusion that you are hinting at? Even today action is being taken against spies, commission agents, corrupt leaders and capitalists. Isn’t this clear as sunshine? What does responsibility mean? Is it to hold the bomb in one’s hands and say ‘beware, I am about to drop it’?

We have come to hear that you and your party members are underground? Why?

This word [underground] has lost its value and is useless to us. Either those who cannot revolt or those who pretend to revolt have spread this word. Or  the word is overused by the reactionaries to distant the public from the revolution. There is no meaning or mystery behind the word.

Mainstream politicians are underground because they don’t move a step without the presence of the police and army. They travel only through helicopter and airplanes because of which they have become underground from the people.

Your party claims to carry the legacy of the ‘people’s war’ and claims to be ‘truly Maoist’. Are planning another “people’s war?’ Does your party have an army?

Not just the people’s war but we are the inheritor of  all Nepali revolutions. But mostly, it is because of ideological reasons. As far the issue of army goes, army resides with only two powers. One, the class that runs the state and the two,  the revolutionary power that wants to end the domain of reactionary state. Perhaps it is time to speak the truth about the People's Liberation Army. When the Prachandas and Baburams dissolved the People Liberation Army, we protested against them and gathered the comrades who wanted to support the revolution. There were more than 400 comrades who were above the  platoon company and sub-commanders. Later we also had all the members from all over Nepal gather. Later while protecting the glorified history of the People Liberation Army (PLA) we reorganized the PLA. Today the people are not empty, they have the army to drive the revolution. Let's not go into the numbers like you suggest. The important thing to note is that there is enough manpower to push the revolution and bring victory.

What do you think will happen if Oli’s government fails to deliver?

This is not a question about KP Oli’s government. The question is about the crony capitalist state. KP- Prachanda are mere tools. If there was a leader from Congress, Forum or any other group  other than KP Oli and his aides, it would still be the same. Their true god is the crony capitalist power, and its heart is in places like Delhi, Singapore and Bangkok. If their desires change than KP’s time will end.

We have outlined a few principles for our revolution. First and  foremost, we will prepare ourselves for the revolution. Second, either we will unite with other revolutionary forces or create an alliance to create a framework to march forward. Third, we are ready to work with nationalist parties for the sake of sovereignty and political change. Fourth we are ready to work with true democratic forces for the freedom and rights of the people. Fifth,  we are also ready to fight along those revolutionary forces working for the liberation from national, caste and gender discrimination.  We want to appeal to all forces that we can unite against the crony capitalist, because there is no alternative to scientific socialism.

Once again, the government fails its commitment to the poor

The Week in Politics

What happened, what does it mean, why does itmatter

The week in politics: what happened, what does it mean, why does it matter

The two transitional justice commissions have received a new lease but for victims, that doesn’t mean much.

Bailed out by blood money