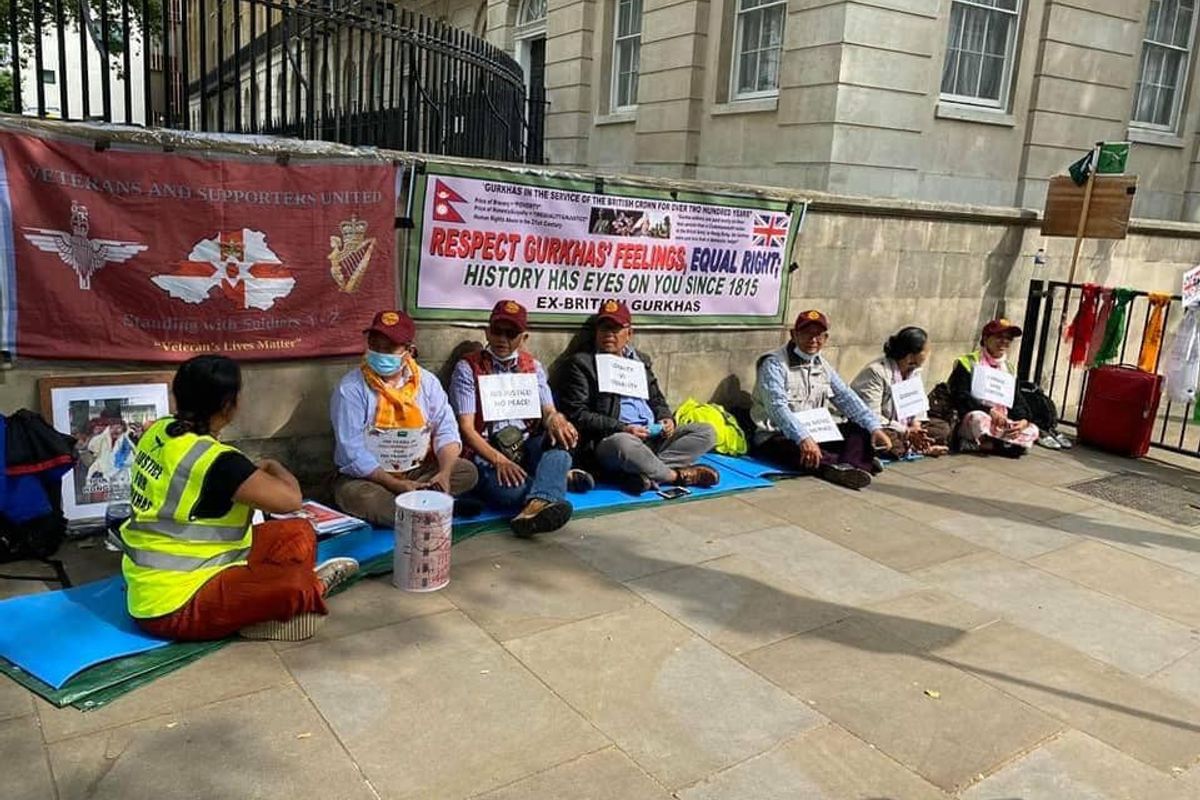 (All Photos - TIM I GURUNG)

Since July 21, a group of veteran British Gurkha soldiers have been staging a relay hunger strike in London’s Whitehall, right opposite 10 Downing Street, the British Prime Minister’s Office. Organized by the British Gurkha Satyagraha United Struggle Committee (BGSUSC), the protesting Gurkhas are demanding equal pensions, among other demands, and have received an outpouring of support from within the country and all over the world.

According to BGSUSC, they are staging a 13-day relay hunger strike in respect of 13 Gurkha Victoria Cross winners, the highest honor in the British Army. They are hoping to hear from the British government by then. If not, the hunger strike will continue indefinitely until the British listen to their grievances. Even death won’t stop us this time, they insist.

Participating in the hunger strike and risking their lives for the cause are Gyanraj Rai, Dhan Gurung, and Pushpa Rana Ghale. All three belong to BGSUSC and are familiar faces in the Gurkha community.

The Gurkha campaign is a long and well-known cause within the community, for they have been protesting for the last 30 years. Why has it taken so long to resolve the Gurkhas’ issues then? Answering this question requires a short history lesson.

A short history of the Gurkhas

The first test of sacrifice on a large scale came in the First World War, when 200,000 Gurkhas from Nepal — which then had a population of just five million — went to many battles in Europe, the Middle East, and Africa. One in 10 Gurkhas did not return. Similarly, in the Second World War, more than 250,000 men went to fight for the British, and 33,000 of them died on fronts like Europe, the Middle East, Africa, and Burma.

After India's independence in 1947, four Gurkha regiments moved to Malaysia and Singapore, fought the communist guerrillas in the 1948-60 Malay Emergency 1948-60, and 204 of them lost their lives. Another 43 Gurkhas lost their lives in the Borneo Confrontation of 1963-66, fighting the Indonesians. After moving to Hong Kong in 1971, the Gurkhas helped safeguard its borders with China. They helped prevent Hong Kong from being overrun by the influx of illegal Chinese immigrants in the early 80s and also fought in the 1982 Falklands war and the 1991 first Gulf War. 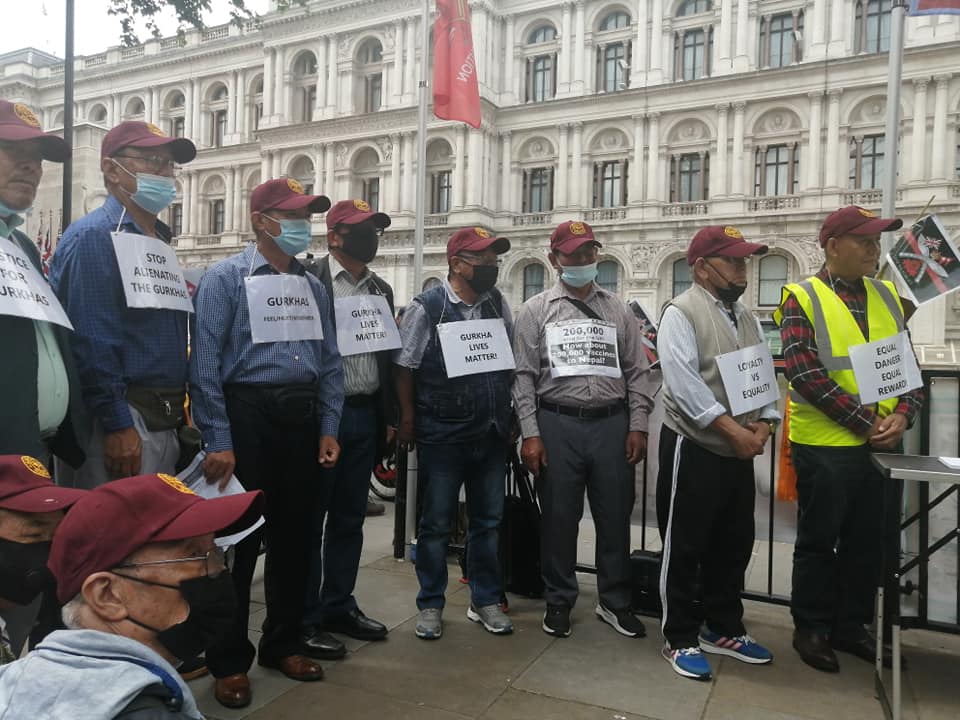 After Hong Kong was returned to China in 1997, the Gurkhas moved to the UK and fought in Kosovo, Iraq, and Afghanistan, where several Gurkhas got killed while many others were injured.

Unfortunately, the British-Gurkha relationship had a fault in its stars from the very beginning. The only reason why the British treated Nepal well was because of the Gurkhas, and they have always made their intention pretty clear. Allowing the Gurkhas to join the British forces was supposed to appear in the Sugauli Treaty of 1816, but it didn't even get a mention. Things went smoothly until 1947, when the British had to leave India, and they split the Gurkhas between the British and the Indian armies. A Tripartite Treaty signed in 1947 between the British, India, and Nepal is the only existing treaty based on which the Gurkhas have been enlisted for the last 74 years.

After leaving India in 1948, the British adopted a separate system regarding the Gurkha's pay, pension, and other service-related allowances in the British Army. The fund came from its colonial governments, mainly in Malaysia, Singapore, and Hong Kong, instead of directly from the UK treasury. This intentionally avoided integrating the Gurkhas into the main British Army. The British also applied the Indian Pay Code (IPC) to keep the Gurkha’s pay on par with the Indian Army so as to pay the Gurkhas as little as possible. No matter where the Gurkhas were deployed, their pay and pension were always calculated based on the living standard back in Nepal.

After the Second World War, many Gurkhas who were mentally scarred and physically impaired were sent home without any pension or severance pay. The Gurkhas also faced two major rundowns in 1969 and 1994, and a considerable number of Gurkhas were sent home without pension and proper compensation. As a result, those Gurkhas who had served the British after the Second World War and up to 1994 were the hardest hit and lived a difficult life back in Nepal. In terms of both pay and pension, the Gurkhas were paid 10 times less than their counterparts in the British Army, and the flagrant disparity between the two sides of the same Army inspired a long and hard-fought campaign in the early 90s.

A history of struggle

The Gurkha Justice Campaign started in early 1990 in Nepal and eventually reached London in the early 2000s when it garnered support from influential people in the UK. The Gurkha Army Ex-Servicemen Organisation (GAESO), the Nepal Ex-Servicemen Organization (NESO), the United British Gurkha Ex-Servicemen Association (UBGEA), and the British Gurkha Welfare Society (BGWS) were the leading campaigners and fought continuously for Gurkha rights. The campaign reached its pinnacle in 2009 when the Gurkhas won the right of abode in the UK, enabling the Gurkhas to move and live there.

Seventy percent of the 110,000 people of Nepali origin living in the UK in 2018 were Gurkhas and their descendants. But moving from Nepal to the UK wasn't smooth sailing for many and unforeseen problems started to surface. Gurkha immigrants to the UK faced language, cultural, social, economic, and legal barriers. Immigration issues led to family separations and the meager pension they had wasn’t enough to live a decent life in the UK. The grievances that they considered over now persisted. And the Gurkhas needed another campaigner to fight for them.

The Gurkha Satyagraha was thus formed in 2012. Its convenor, Gyanraj Rai, conducted a hunger strike in front of Downing Street in 2013 that lasted for 15 days, after which the British government agreed to sit for talks to resolve the Gurkha grievances.

But despite numerous talks, the pension issue remained unresolved. Those who joined the British Army after 1997 enjoy more or less the same pay and pension as their British counterparts under the new British armed forces pension scheme. But those who retired between the Second World War and 1994 did not receive the same pension. The current hunger strike is intended to secure equal pensions for them.

The BGSUSC presented a 13-point list of demands to the UK government in May 2021 and held two peaceful rallies on June 15 and July 1 to make their point. The relay hunger strike was scheduled to start on July 1 but was postponed for three weeks after receiving a formal request from the Nepal government that it would speak to the British formally by then. But the promise never materialized and the Gurkhas went on their hunger strike as planned on July 21. Now in its tenth day, the protesting Gurkhas have yet to hear from the British government.

It pains me to point out that the other two leading Gurkha organizations — GAESO and BGWS — are not participating in this campaign. Had they learned from their past mistakes and united as one, Gurkha issues would have been a thing of the past by now. But when have we ever been able to put our differences aside and fight together for the common cause?

Furthermore, had the Nepal government not been so naïve, indifferent, and insensitive, the Gurkhas would never have had to fight on their own to be able to live a decent and respectable life. How can a sovereign country sit on an ancient, outdated treaty signed 74 years ago and let a foreign country take their best youths for almost nothing? For a few million pounds of aid money, we give away some of our best assets for free. For how long can we let this continue?

Last but not least, the Gurkhas have the support of several veterans groups in the UK, and that might just be enough to secure an agreeable solution to their plights.

I wish them all the best. Jai Gurkha!

Tim I Gurung  TIM I GURUNG is a novelist, an ex-Gurkha, author of Ayo Gorkhali, an acclaimed book about the Gurkhas. He lives in Hong Kong.

Year-round, Teku residents live with the putrid smell that comes from the mounds of garbage dumped at the municipal waste station. Come the rains, the stench becomes unbearable—yet nobody cares.

What is and isn’t in a word?

Tablighi Jamaat and the precarity of global governance

Oli has scheduled an election for spring but prospects are slim

A series of constitutional, political, logistical, and temporal constraints will have to be resolved if a legitimate election is to be held in spring