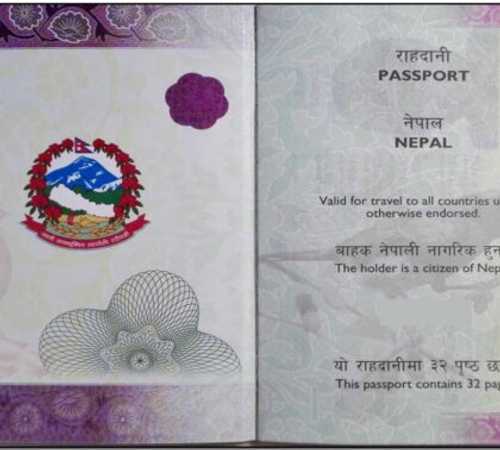 Anyone planning to travel abroad might soon have to go to the airport armed with their high school diploma and demonstrate their English-speaking ability to the immigration officers.

Immigration guidelines currently under consideration at the Ministry of Home Affairs include these provisions and more — at least $1,000 in spending money, proof of accommodation, return tickets, and even proof of kinship if going to visit a relative. Most of the provisions are already in effect, as per new immigration guidelines issued by the Home Ministry last year. But the high school diploma and the English-speaking requirement are new additions.

Ministry officials say that the details have yet to be finalized but the revised rules would also require travellers to purchase travel insurance and provide supporting travel documents.

“These are all possible measures that are currently being discussed. Some of these provisions could be dropped or altered in the final draft,”  Tek Narayan Paudel, spokesperson at the Department of Immigraton, told the Record.

Read also: Speaking good English does not make you intelligent

The final changes would be based on recommendations from the Immigration Department and those from an internal panel formed to look into the “misuse of tourist visas”, according to Paudel. The Home Ministry had formed a panel in September under joint secretary Rudra Prasad Pandit to recommend possible solutions to prevent migrant workers from leaving the country on tourist visas.

On Thursday, the Pandit panel submitted its report, but details remain scarce.

According to immigration officials, ever since the Covid-19 pandemic, migrant workers are increasingly leaving Nepal on tourist visas. As Covid-19 spread, the government had placed a moratorium on the issuance of labour permits in March. Select migrant workers were allowed to go back to work in July while new permits began to be issued again in September. Up until mid-November, more than 23,000 migrants had received labour permits, despite the pandemic, according to statistics from the Department of Foreign Employment. Officials say that the actual number of workers who’ve left is higher since many are believed to have left on tourist visas.

Work visas are only granted to migrant workers after obtaining a work contract from the employer, a clean health report, an official labour permit, an insurance policy, and attending pre-departure orientation. Before the pandemic, over 700 Nepalis left the country every day for overseas employment.

“Because few countries are open for workers, some recruitment companies are sending workers abroad on tourist visas,” Tikamani Neupane, spokesperson for the Department of Foreign Employment, told the Record. “Recent raids have shown illicit links with travel companies.”

According to Neupane, the new guidelines will help prevent such practices, as they put outbound workers at risk. Without proper permits, workers are often at the mercy of their employers and problems can arise if they need to be rescued or repatriated. Neupane believes that the guidelines will also help break the illicit nexus that exists between employment agencies and corrupt airport officials who facilitate the departure of workers on tourist visas.

“Recently, we had to request the Home Ministry to transfer out some immigration officers due to suspicions we had about their roles in sending workers abroad on tourist visas,” he said.

Since 2013, more than 200 airport officials have been arrested for “smuggling” workers, according to media reports.

The guidelines may be well-intentioned but the Nepal government has a long history of taking protectionist approaches to legislation that end up doing more harm than good. Since 1998, the government has enacted a series of legislations aimed at preventing Nepali women from migrating for domestic work. These embargos have been lifted and reapplied, often arbitrarily, forcing women to choose more dangerous routes to go abroad.

A side-effect of such haphazard legislation, says Ganesh Gurung, is that officials are accorded too much power to decide the fates of workers.

“The focus should be on monitoring and strict punishment, instead  of policies that empower officers,” said Gurung, who has studied migrant labour for decades and is a former member of the National Planning Commission. “The biggest problems are immigration staff, police, and airline staff. No one is afraid of the monitoring officer because they know that he too is corrupt.”

It is this misuse of power that led to the tragic 2013 case of Sita Rai, who was robbed and then raped by an immigration officer. The case made headlines, and a subsequent Home Ministry investigation implicated four immigration officials — Ram Prasad Koirala, Tika Pokhrel, Somnath Khanal, and Parsuram Basnet.

The officers acted so brazenly as the enforcement of any existing guidelines are largely left to the discretion of the individual immigration officer. Students are required to obtain No Objection Certificates from the Education Ministry before leaving the country but enforcement at the airport is lax. It is the same with tourists who are required to present supporting documents. All too often, it is women and minorities who are at the receiving end of scrutiny.

Experts remain skeptical of the provisions in the proposed guidelines, saying that while they might have been drafted with good intention, they are problematic for a number of reasons. A high-school diploma does not always testify to an individual’s skills, especially when it comes to vocational professions, and the ability to speak English does not apply to all countries across the globe. But what is most concerning, say experts, is that these guidelines could be employed to infringe on an individual’s right to movement, a fundamental right that is guaranteed by the Constitution.

In July 2020, former child soldier Lenin Bista was prevented from departing for Thailand by immigration officers, even though he had already been issued a boarding pass. The officers had claimed that Bista had not received permission from the proper authorities to leave the country. In response to a petition, the Supreme Court had sided firmly with Bista, saying that the restriction had violated his fundamental rights.

“These kinds of rules are only implemented whenever rampant corruption is exposed to the public,” said Gurung. “But nobody is afraid since the airport has become a cobweb of corruption involving immigration officers, the police, airlines, and travel and manpower agencies.”

The former bureaucrat and 2017 Kathmandu mayoral candidate reflects on running as an independent and what independents and smaller party candidates bring to the table.

Reservoir-type hydropower projects might generate much-needed electricity for Nepal but they also come at significant environmental, ecological, and social costs.

As the Army sets up camp, locals are tense about what costs they will have to bear

Everest’s porters shoulder the heaviest burdens of the pandemic

The Covid-19 pandemic has brought the tourism industry to a grinding halt and among those most affected have been thousands of porters.

Private citizens in Nepal and abroad lobby for vaccines

Confronted with the Nepal government’s inadequacy, individuals in Nepal, the US, the UK, and Canada are calling on foreign governments to ensure that Nepal gets a supply of vaccines